The Science Behind What People Love to Share on Social Media

The web is a crowded place, with millions of articles being shared every day on social media. Wouldn’t it be nice to know the types of content that resonate with readers the most?

We analyzed the top million most shared articles in the past six months, and we categorized them into different content types, such as quizzes, list posts, how-to articles, videos, giveaways, and infographics. The most popular content type, by far, was quizzes, which averaged 51,968 total Facebook shares (likes + shares). In contrast, the average article (among the top million), had 15,527 total Facebook shares.

There’s a good reason why we love to share quizzes on Facebook. It feeds our ego and strengthens our identity. When we share our quiz results with our friends, it gives them a glimpse into who we are, what we’re interested in, and what we value.

BuzzFeed, in particular, seems to have mastered the art of quizzes. These were the five most shared quizzes on Facebook in the past six months:

With mobile devices and shortened attention spans, surely we should keep our content short and sweet, right? Surprisingly, that’s not the case.

However, once articles surpassed 2500 words, the average number of shares dropped again. So, although you should write comprehensive, detailed articles, you shouldn’t go overboard.

Here’s a chart that shows the relationship between the number of words in an article and the average number of Facebook shares: The optimal length of a video on Facebook is 4 minutes to 4 minutes, 20 seconds.

Videos, as you might expect are very popular on Facebook. But, what’s the optimal length of a video? Do people tend to share short ones or long ones more?

We analyzed the 500,000 most shared YouTube videos and found that videos of 4 minutes to 4 minutes, 20 seconds long averaged 79,859 total Facebook shares, which was the best. In fact, generally speaking, long videos performed much better than short ones. The worst performing videos were 0-20 seconds long and 40-60 seconds long.

Here’s a chart showing the correlation between the length of the video (in seconds) and the average number of Facebook shares: 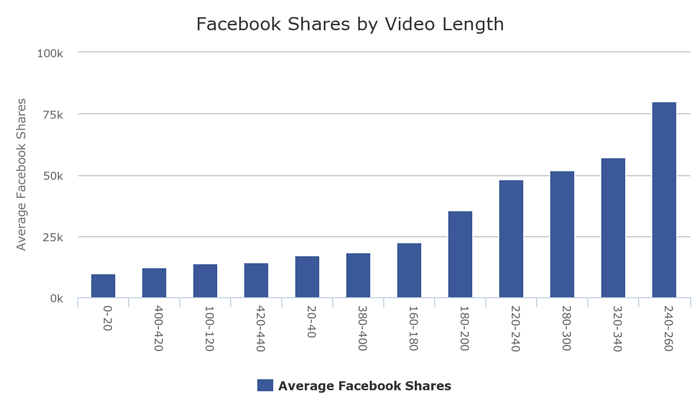 Here’s a sobering statistic: out of all the sites publishing on Facebook, the top ten publishers have about 60% of the total number of Facebook shares on a given day. One of them even garnered 57% of all shares, and that was YouTube.

BuzzFeed as the #2 publisher won’t surprise many people, but Facebook users also love to share thoughtful, insightful articles from the New York Times in addition to entertaining articles, such as those found on BuzzFeed and Upworthy. 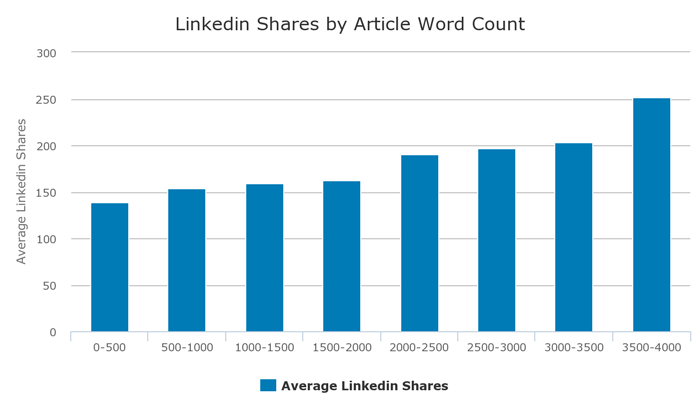 There could be many reasons for this, but certainly, one to consider is that LinkedIn users want to establish themselves as thought leaders and experts in their fields. Long-form, detailed, comprehensive posts are often filled with useful insights and backed by research. Sharing these types of articles makes us look smart among our colleagues.

However, just because LinkedIn users prefer long-form content doesn’t mean you should stuff articles with as many words as possible. Most articles we analyzed had a lot of words, but they were formatted in a way that was easy to read, with lots of visuals mixed in along with the text.

A perfect example is this SmashingMagazine article about designing call-to-action buttons, which has over 3500 words, yet it is filled with lots of gorgeous imagery and screenshots. Also, take a look at this Atlantic article about office speak (over 1000 LinkedIn shares). It has over 3500 words, too, but it includes plenty of eye-grabbing images, spiffy quotes, and charts. If you have no experience with writing long-form content, take these examples, and copy the way they are formatted.

It’s pretty clear that LinkedIn members love to share articles about self-improvement. When we analyzed the keywords in the titles of popular articles, we found these were the most frequently used:

It’s not surprising that topics like leadership, career, and interviewing are among the most popular. This doesn’t tell us anything new since that’s essentially what LinkedIn is all about! However, words like “habits,” “lessons,” “advice,” and “mistakes” do tell us that LinkedIn members are specifically interested in actionable tips on improving oneself. And, the fact that “trends” is a popular word indicates that LinkedIn users are looking for insights into what the future holds in their industries.

A great way to see headline ideas is to do a site search at BuzzSumo. For instance, if you want to see a list of popular articles that include the word “habits,” perform a search for “linkedin.com habits” that will bring the following list of results: Here are some other topics that receive a lot of engagement on LinkedIn:

Popular topics on Twitter range from sports to climate change.

Here are the ten most popular topics of articles shared on Twitter, ordered by their average number of Twitter shares among the top one million most shared articles on Twitter in the past six months:

Article headlines on Twitter should be kept between 45-50 characters long.

It’s important to be mindful of your headline length, particularly on Twitter because of its character limit. We found that the most tweeted articles had 50 characters in their headline, although anywhere from 45-49 characters generally performed well. Because most people share the headline when they tweet a link to an article, 50 characters leaves plenty of room for commentary or reactions.

If you must have a headline over 50 characters long, the “danger” limit to keep in mind is 80 characters. Of the one million most retweeted articles, only 12% had 80 or more characters in their headline. This headline from The Next Web has 50 characters, which leaves plenty of room for other content, such as hashtags, a link, commentary, etc.

If you’re a B2B company, you might think that Pinterest isn’t worth the bother. However, there is one way to break into Pinterest, and that’s with infographics. Surprisingly, we saw lots of examples of B2B infographics being shared widely on Pinterest.

Now, how often have you found a Pinterest board in the top 10 results? Still rare, depending on what you’re searching for; but in our experience, they pop up much more frequently. In fact, Pinterest boards ranking high in the SERPs is something others have seen as well.

About the Author: This article was written by Henley Wing of BuzzSumo.