So we do all the typical stuff: Read articles, use Buffer, follow best practices…whatever else we’re supposed to do.

In my recent experiments with Instagram, I figured out a few new techniques that not many people are using. Try these overlooked ideas, and watch your Instagram audience explode.

1. Do keyword research on hashtags.

It’s not enough just to use the hot hashtags. Your goal is to use the most relevant and highest traffic hashtags. Does this sound a little bit like SEO? There is a lot of similarity. Hashtags are the Instagram equivalent of keywords, so you need to find out which ones your target users are most likely to click on.

You’ll get the highest amount of engagement if you use at least 11 hashtags, according to research by TrackMaven: 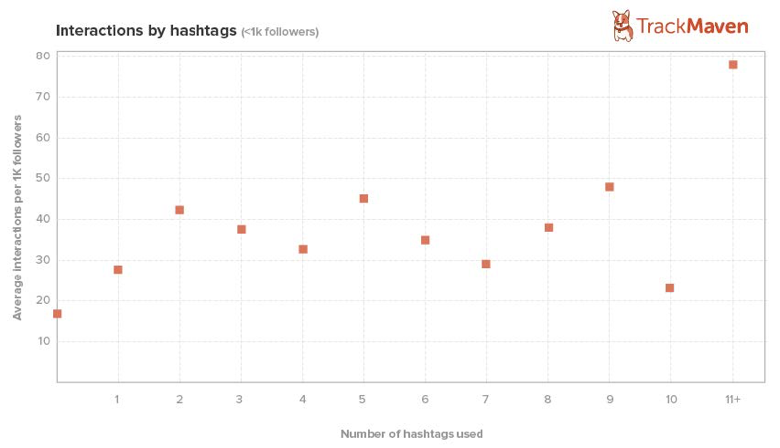 And the best hashtags to use are those that will get relevant traffic.

If you choose the wrong hashtags, you won’t get the level of engagement that you’re looking for. Jawbone, maker of a fitness tracker, tried to use the power of hashtags on Instagram. They chose the hashtag #knowyourself, because it matched the theme of their marketing. Unfortunately, the #knowyourself hashtag was too generic. A lot of people were already using it, and those who were interested in clicking on #knowyourself didn’t engage with the theme that Jawbone was pushing.

If you pick the right keywords — relevant and targeted — you’ll gain a lot more popularity in the ways that count.

People feel good when they are inspired. When someone feels inspired, they like the person who inspired them.

That’s what #nitishdhiman, a social media marketer, does with his account. His Instagram keeps up a steady output of inspirational quotes for marketers: 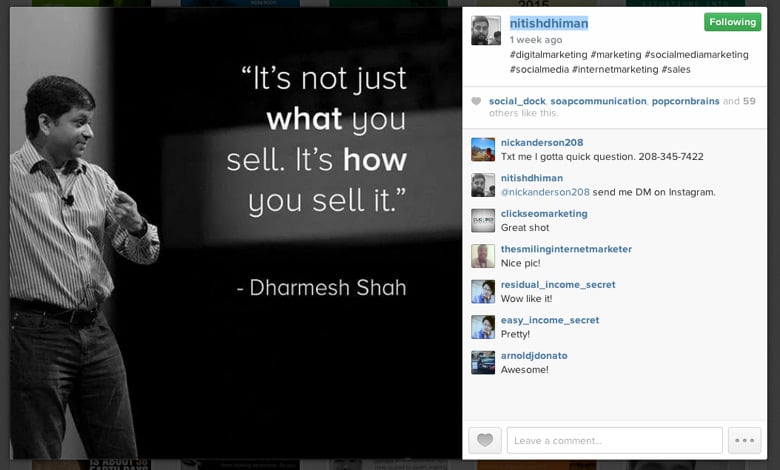 3. Give away gifts. Nice ones. 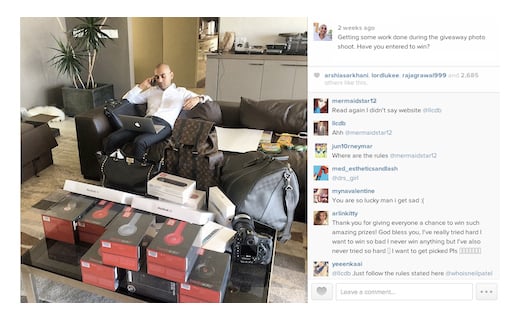 Some of the techniques for becoming insanely popular on Instagram are definitely not free.

Some of my biggest costs were giving away prizes. I gave away nice stuff, which really caught on. Obviously, however, I leveraged my giveaways to get more followers. A single giveaway could score me a few thousand extra followers, which turned into more popularity later on down the road. 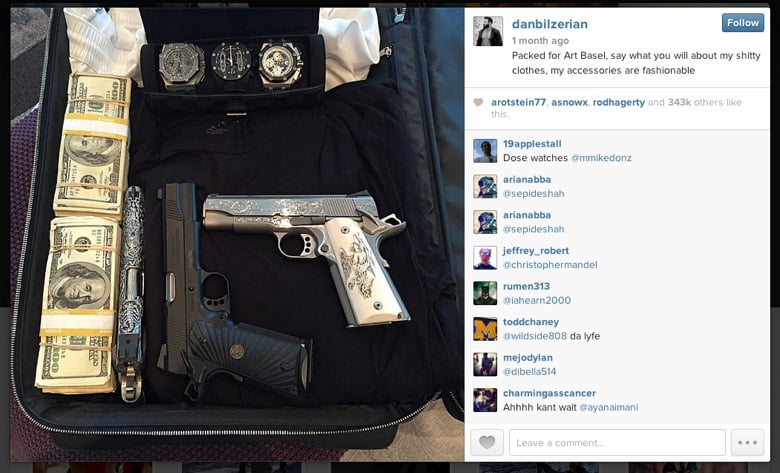 And when it comes to lifestyle, few people live as extravagantly as Bilzerian. That’s part of his secret to success. He lives like a king, and has more Instagram followers than some countries have citizens. Maybe that’s why he’s earned the title “King of Instagram.”

The new wave of lifestyle marketing is extremely appealing. We’re curious about how other people live, especially if we want to live that way ourselves. Of course we can’t live that way, so we live out our dreams through them. Celebrities, rich people, entrepreneurs, world travelers, extreme athletes, and fashion consultants can easily feature such lifestyle pictures on their Instagram, racking up tons of follows and likes.

But what about the rest of us who live more normal lives? We’re not exactly parachuting every day, or tooling around in a Lamborghini. So what? Lifestyle pictures don’t need to be extreme in order to be appealing. They just need to be basic lifestyle pictures.

Even Taylor Swift, who has her fair share of glam, posts normal lifestyle events — like a birthday party. It’s not exactly photoshopped. Just some normal people having a good time. For brands looking to use this play on Instagram, think of Dos Equis and the “Most Interesting Man in the World.” Here you have a brand personality that serves as a great example – where this lifestyle technique can really hit a home run. Who doesn’t want to see a daily look into the life of this guy? His selfies are done on canvas.

Does your brand have a personality that would do wonders on Instagram?

One of the reasons why Instagram is so popular is because it provides a close look at people’s everyday life — what they look like, how they act, what they do.

Some people have a thing against selfies, as if they are some narcissistic iniquity. In actuality, selfies are part of the personal self expression in the digital age. It’s okay. Perhaps we all have a curiosity or tendency to snoop. Instagram gratifies that desire. If you’re a beautiful celeb, people expect a lot of selfies.

But even if you’re not endowed with the same physical attractiveness, there’s nothing to be ashamed of. People want to see you. Go ahead and snap a selfie or two.

You might even be able to get away with hundreds of selfies like mrpimpgoodgame, “the [self-proclaimed] leader of the selfie movement.” When I first started using Instagram, I thought it would be enough just to like other people’s pictures in order for them to follow me and like my photos. As it turned out, I got way more interaction when I commented on other users’ photos then when I merely liked them.

There’s a reason for this. On Instagram, there are 575 likes every second, but only 81 comments. People like photos 609% more than they comment on photos. Obviously, it’s easier to double tap a photo than it is to tap comment, and then think of something creative to say. When you go to that extra effort, people like that. They’re more likely to tap your profile and follow you.

Instagram guru Emil Pakarklis has nearly 50,000 followers. Here is his proven advice for getting more followers:

You can also get a lot of exposure by leaving meaningful comments on the photos of other people. When you leave a thoughtful and positive comment, there’s a good chance that the author of that photo will become curious to check out your profile. And if your profile is good, you’ll get a new follower.

Most people know that using hashtags is an easy way to get more exposure…but which hashtags should you use?

Many people simply smother each post with a huge variety of hashtags like #bestofig or #likeforlike, hoping to get more likes. This can work. But a more powerful method of getting quick and easy likes is to use the Top 100 tags.

Oberlo keeps a running list of the top 100 tags on Instagram. Check this list regularly in order to use the tags that most other people are using.

Who wants to follow an account that has just a few photos? When a user clicks on another profile, they see three different metrics that will help them to determine whether or not they want to follow. All of these numbers are important, especially the first two, posts and followers. You can’t necessarily control the number of followers you have, but you can increase your posts. This is the first thing that you should work on in order to create an Instagram account that is worthy of popularity.

You can work hard early on to make sure that you build up a good portfolio. After that, keep your posting to a maximum of four per day.

One of the toughest parts of becoming popular on Instagram is just starting out. How do you drum up thousands of followers from scratch?

You don’t have to.

The best way to boost your popularity is to start with an account that already has a few thousand followers.

In my experiments, I bought an Instagram account that had 131,000 followers. I just changed the name and took over.

What happened next was really interesting. I lost a few followers — a few thousand actually. I dropped from 131,000 to 21,000 in a few weeks. The followers dropped by as many as 3,000 a day. It eventually slowed down, and I started gaining more than I was losing. As I continued with my regular posting, I eventually got more followers than the account originally had.

Of course, the tricky part is finding an account that has an audience that will somewhat seamlessly mesh with your take over. For companies, a good example would be if you operate an online shoe store. There are plenty of “sneakerheads” and “shoe fashionistas” out there operating popular Instagram accounts. You could either approach them with an offer or partner with them. Think about it carefully, but it might be a great way to boost up your Instagram power over night.

These aren’t the only techniques for boosting your Instagram followers. There are plenty of other ways such as interacting with your followers, commenting on photos, hashtagging your photos, etc. All the conventional methods are successful, and they have their place.

If you’re eager for getting an edge and growing your traffic even more, then one of these techniques may work for you.