How to Give Your Content Wings: We Analyzed 11,541 Viral Articles from 2016 to Uncover the Secret Formula

Blog / How to Give Your Content Wings: We Analyzed 11,541 Viral Articles from 2016 to Uncover the Secret Formula 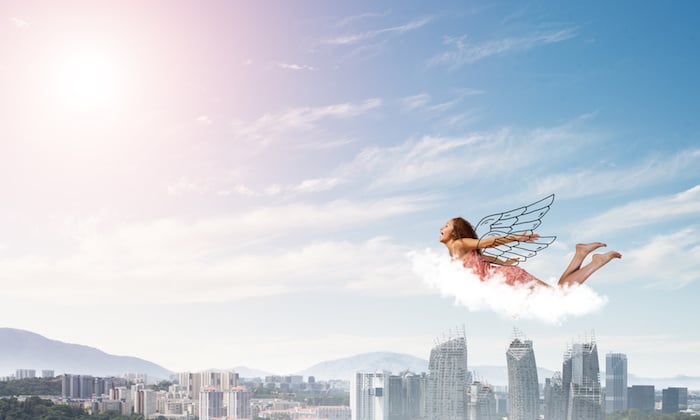 I’ve been blogging for more than 10 years. After launching and growing multiple successful blogs, there’s one thing that doesn’t change — the amount of effort I put into writing really good headlines.

Good headlines don’t happen by accident. Killer titles have to grab people’s attention, spark their curiosity and encourage them to click!

Even though my titles are good, I wanted to make them better. Heck, I wanted my headlines to be so good that they would go viral!

If I could improve my headlines, I would be able to boost my traffic, engagement and sales.

So, I did what I normally do when I’m trying to improve:  I got data.

Here was my idea:  I would gather the top 10,000+ article titles or headlines from the past year and see what they all had in common. I would parse them, compare them and uncover the tactics of top-performing titles.

If I did this, I would have a clear idea of how to create killer titles, every time.

This is what I discovered.

This is the data that I used

One of my favorite tools for content data and insight is Buzzsumo. In order to get some advanced social sharing metrics on headlines, I reached out to Steve Rayson at Buzzsumo.

We took the top 10,000 articles for the entire 2016 calendar year for our analysis. We also grabbed 20,000 top-performing titles from last year for comparative analysis.

How did we measure “top” articles? Simple. Through social sharing. Social shares are a public source of data and one that Buzzsumo has ready access to.

If people truly love an article, benefit from it and appreciate it, they’ll want to share it with their social followers.

Sorting through the data was the challenging part. Some of the top-shared articles were complete spam!

Some marketers create spam articles with salacious or celebrity gossip headlines and then artificially inflate the social shares of those articles using fake followers.

It’s a dirty tactic and obviously doesn’t do a whole lot of good in the long run. We removed these spam articles from our analysis.

Big Findings from the Top Titles of 2016

What were the big findings that jumped out at us from the data? There were seven of them.

61% of the top titles have a number

Of these top performing titles, most of them had a number in the title — 4,436 titles with no numbers vs. 7,105 titles with numbers in them. Numbers appear often in list posts. For example, I just took a look at the top social shares from my blog, Quick Sprout. The three top shared articles are list posts.

Buzzfeed is well known for its list posts. Here are their most shared articles from the last year. Three of them are listicles. 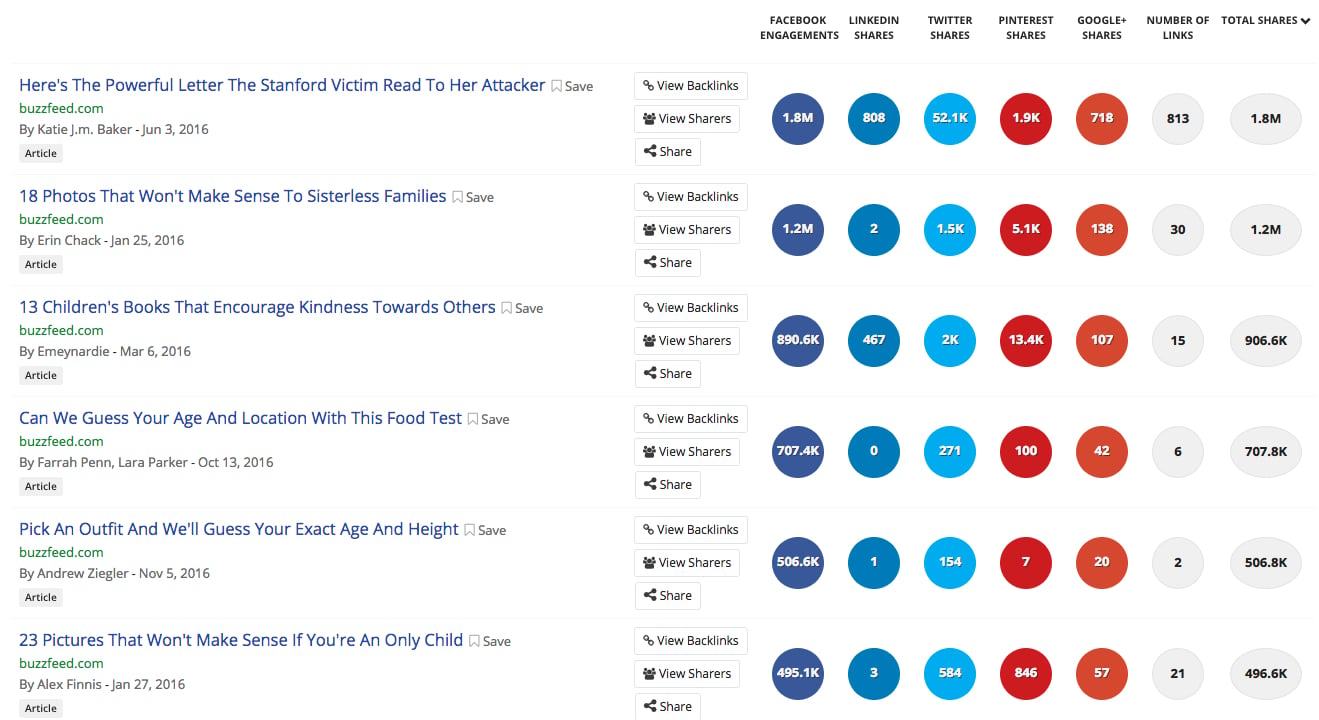 Does this mean that you should always create list posts?

Not necessarily. For example, some of my titles are definitely not list posts, but they do have a number in them. Like this one… 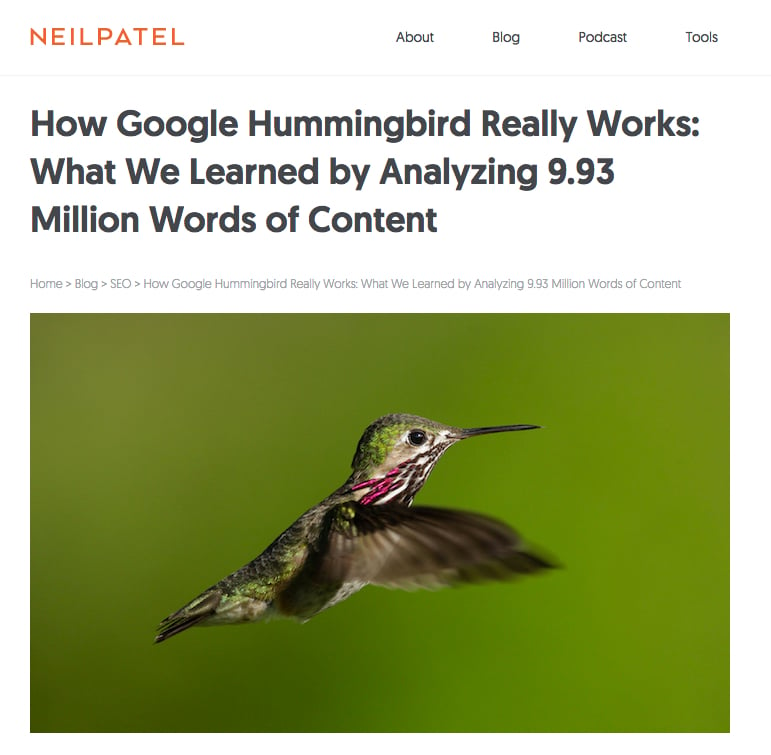 If you’re an experienced content marketer, this information about number-driven titles isn’t a big surprise to you.

One reason is certainty. Psychologists call it the Ellsberg paradox, which tends to reinforce the theory of ambiguity aversion.

Here is an oversimplified syllogism to make sense of it:

Let me make a quick data-driven observation about listicles. We noticed that only 8% of the titles with numbers had a number at the beginning of the title.

In listicles, it’s common to put the number at the beginning.

However, based on the data, you don’t need a number at the beginning of the title in order to get more social shares. Putting the number deeper within the title might be a better choice.

The takeaway:  Use numbers in at least half of your articles.

The phrase “This is what” garners massive social shares

One of the ways we diced our data was by isolating short commonly-used phrases.

Our working theory was that we would be able to break a title down into its component parts, then isolate the phrases that caused them to perform so well.

From other research, we know that the length of headlines with the highest engagement levels is 16-18 words. Headlines this long have phrases that are repeated across a wide variety of headlines.

What did we find out? Here are the top five three-word phrases according to social shares. To find these phrases, we removed common and stop words (“and,” “the,” “but,” etc.). 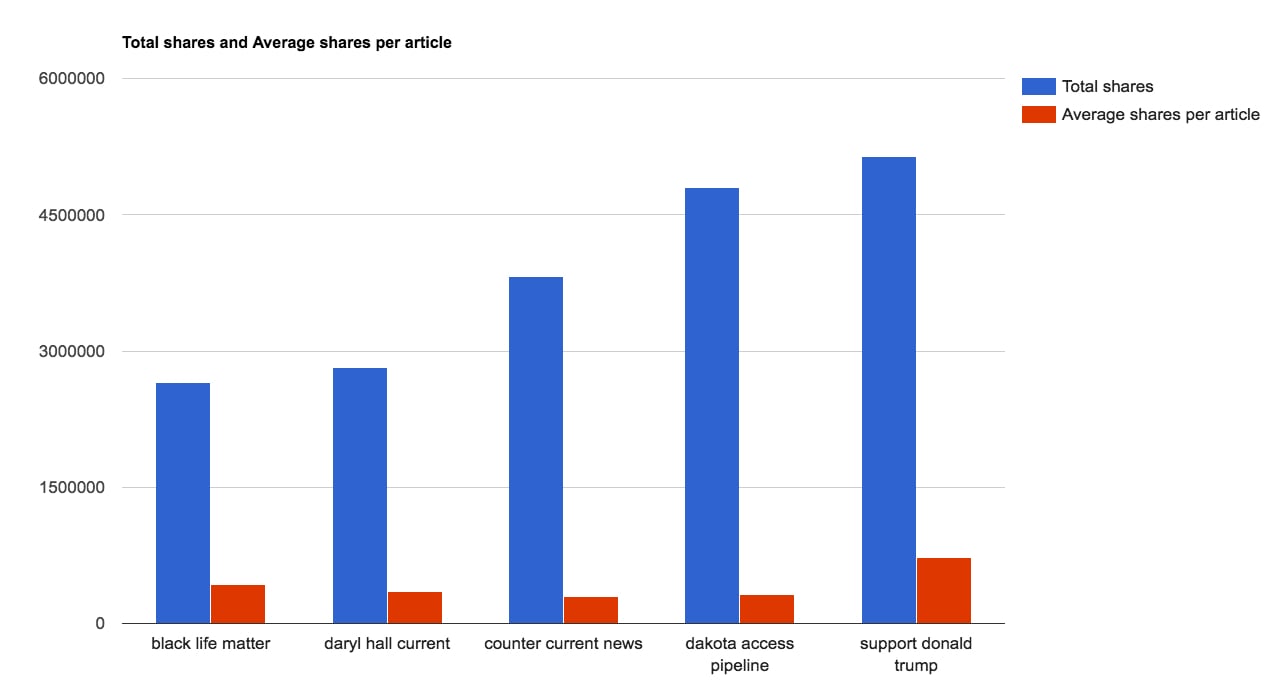 Obviously, most of the three-word phrases are too specific to be used broadly in any type content.

These phrases show what was trending in the past year — political and social issues.

But, there were other interesting phrases that we uncovered. This one was surprising:  The phrase “this is what” was one of the most popular headline phrases from last year.

Well, it could have something to do with this… 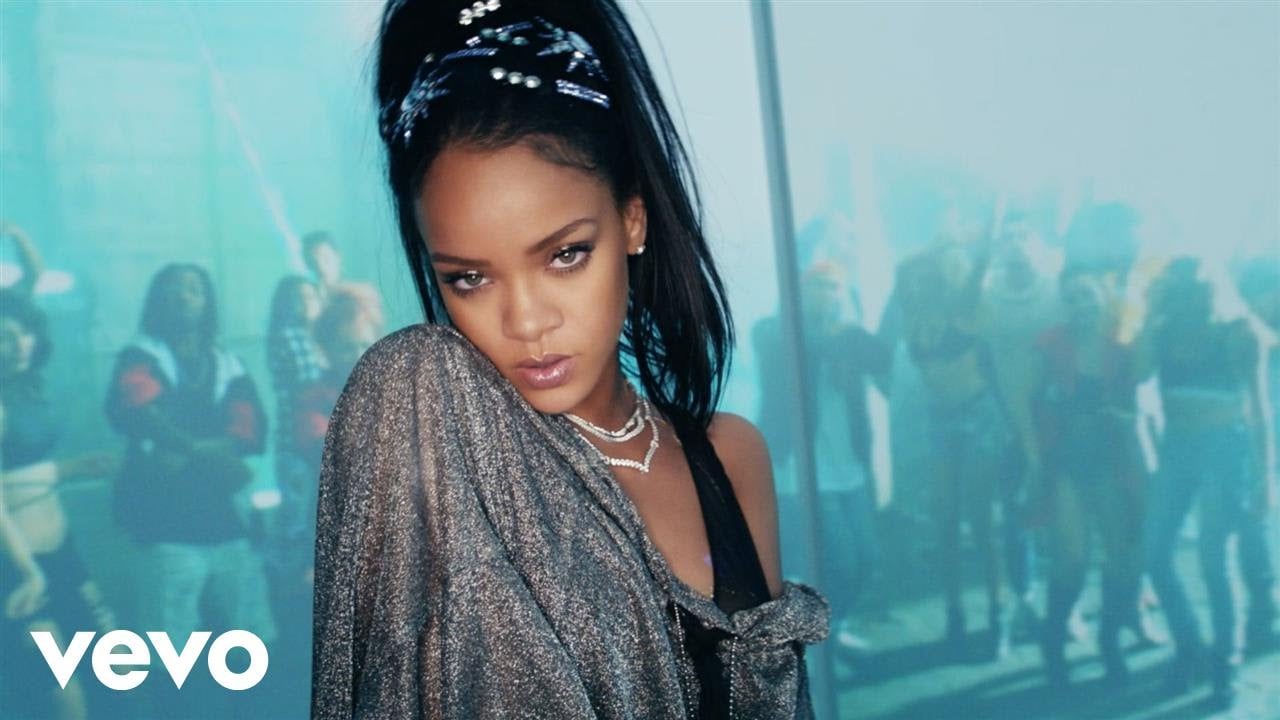 Based on the data, however, there’s more than just Rihanna singing a Calvin Harris song, “This Is What You Came For,” to drive top-performing headlines.

What could it be?

Again, it has to do with certainty. When a writer says “this is what,” he or she is making a definitive statement about something. A statement like that also asserts the author’s authority on the subject matter.

The takeaway:  Use the phrase “this is what” in an article title.

The average story length of a top article is 343 words.

For me, this was a surprising insight from the data. The top shared articles from 2016 had an average of 343 words!

Here’s why it was surprising to me. I constantly emphasize the importance of long form content.

Why? Because it’s proven that long form content gets higher rankings and more traffic.

There’s another angle to the data that lowered the average word count:  images.

When you share something on social media, your social media platform pulls an image from the article and puts it into your post.

For example, if you paste a URL into Facebook, then Facebook will select an image in the article and use it to accompany the link. 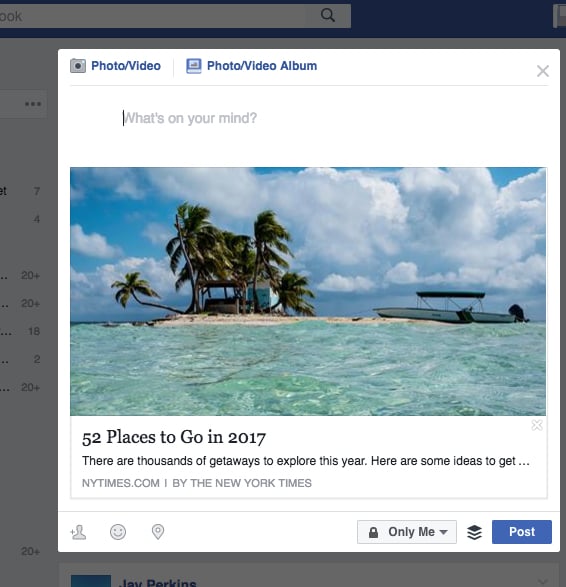 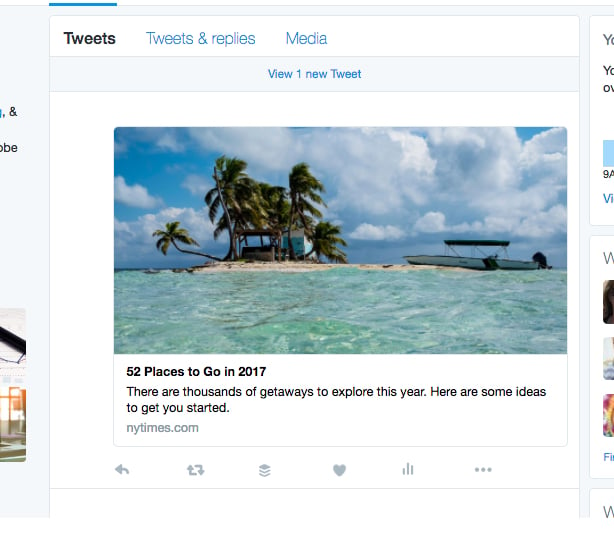 These images have an impact on social sharing. They may encourage people to retweet or reshare without even interacting with the article.

Or, there may not even be an article! It could be a mere headline with an image! Some of the articles we looked at had no text.

Obviously, highly-shared articles with 0 words caused the average word count to be lower.

There is another reason why high social sharing correlated with low average word count. Many of the websites with the high social shares were news websites, not deep dive informational websites (like mine).

For most breaking news stories, short content blurbs are a journalistic best practice. Breaking news, which often prompts high social sharing, doesn’t have a lot of content to go with it.

Keep in mind that quality is always more important than quantity. Google’s AI, machine learning, and semantic LSI is able to accurately determine article quality, and will reward content based on qualitative and quantitative features.

The takeaway:  If you are publishing breaking news, write articles around 500 words.

“How to” articles still work

One of the top twenty two-word phrases in our analysis was the word “how to.”

We also identified other associated topics in our data parsing:

“How to” articles have been a backbone of the web ever since it started. These articles have high share rates, because they are informative and tend to help people improve themselves.

The takeaway:  Write content that explains “how to” do something, and use that phrase — “how to” — in the title.

When we analyzed the data to find top phrases, we found mostly specific topics or names (more on that in the section below).

But, some of the phrases, such as “how to” and “this is what” were general enough to be used in any context.

Here was another set of recurring two-word phrases. These phrases were found in the top 10th, 11th, and 12th places of the most common two-word pairs.

One of our top 20 three-word pairs was “Do you agree.”

Notice a common theme in each of those?

You may be wondering, is it a good idea to use questions for titles? The answer from the data is yes.

The takeaway:  Write some titles in the form of questions, especially questions that include “do you,” “can you,” “is the,” and “do you agree.”

In my articles, I don’t pick sides on political or social issues. Why not? Because that isn’t my focus! But, do I pick sides on marketing, SEO, or content marketing issues? Yes!

Here is a segment of the top two word phrases. “In the” and “of the” aren’t controversial, of course. But, “Donald Trump” and “Hillary Clinton” are controversial.

Widening our sample set, here is another group of phrases and their frequency. You’ll notice that “national anthem,” “president obama,” “bernie sanders” and “standing rock” are all controversial and all have high frequency rates.

The phrases that had the highest frequency in the top articles were also controversial. “Donald Trump” and “Hillary Clinton” alone took more than one half of the frequencies. 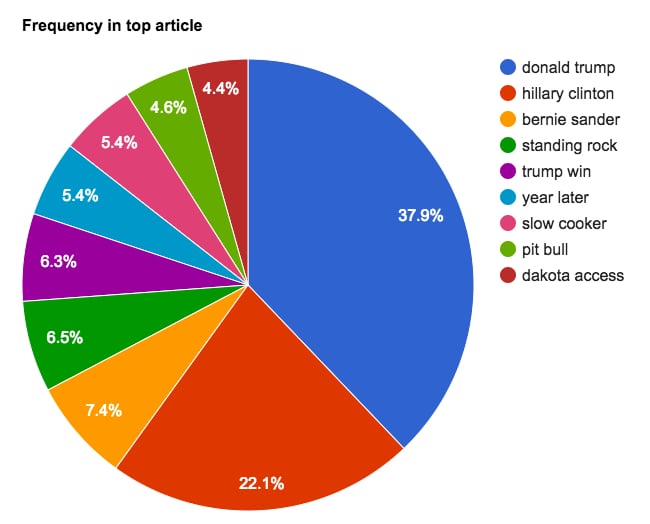 But, what about when we chart these phrases according to social shares? That’s when the real significance appears. 47% of of these top article titles contained the phrase “Donald Trump.” 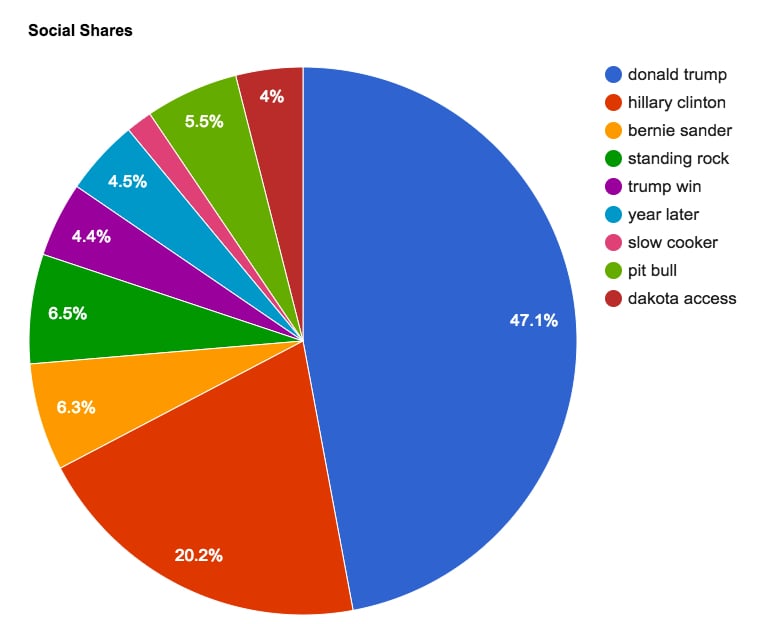 In an election year, we would expect this. But, the takeaway can be expanded. Controversial subjects spark curiosity and interest.

Obviously, if you’re too controversial, you run the risk of needlessly ticking people off. But, most of us aren’t controversial enough. It’s okay to take a strong position and write about it.

In fact, as the data shows, writing about controversial subjects could be a very good idea, if you want to get more social shares.

The Takeaway:  Create a title that contains a controversial issue.

Even though we’re discussing articles, we can’t ignore the impact of video. Obviously, many of the top-shared articles are or contain videos.

Telling the reader what they can expect to find in an article is a good idea. It adds to the certainty of the article, because they know what they are going to see when they click on it.

If you are featuring an infographic, data analysis or video in your article, it’s a good idea to include that in the title.

The Takeaway:  Whenever possible, post videos and include “video” in the title.

What’s the value of a killer title? Keep in mind that social shares are just one metric of a top-performing article. High social shares do not necessarily mean that you will have better SEO, higher conversions or more revenue.

But, titles can produce these things. Regardless, you can’t argue with the fact that titles matter. Here’s what you can expect more of, if you create great titles:

Basically, titles are the gateway to most of a marketer’s valuable metrics.

And, if you’re wanting to craft the perfect title, these are the data-driven tactics that drive more social shares.

What are your observations on top-performing titles? What tactics are you going to try next?