For quite a while in the search community, there has been talk of “co-citation” and “co-occurrence.” These two terms, which refer to basically the same thing, have been called the next big thing in SEO and are even believed to be the next wave of Google reform.

If co-occurrence and co-citation are such a major change in SEO, it’s important that we understand what they are, and how they could change the SEO game.

Co-occurrence is the presence, frequency, and proximity of similar keywords across various websites. Co-occurrence logically includes keywords that are topically relevant, but not exactly the same.

Co-occurrence isn’t exactly a new thing in SEO. The concept of latent semantic indexing is fundamentally tied to co-occurrence. It’s been around for a while.

Google Caffeine, which rolled out in August 2009, signaled a shift in index expansion and indexation ranking, which subsequently altered how and when sites were returned in the SERPs, with or without a strict set of keywords. The full implementation of Caffeine in June 2010, got webmasters excited about crawl speed. But lost in the exuberance over crawl speed was an underlying change in the way that Google could potentially associate two different websites within a new search infrastructure.

Matt Cutts explained at that time that Caffeine “allows easier annotation of the information stored with documents, and subsequently can unlock the potential of better ranking in the future with those additional signals.” Basically, Cutts was describing co-occurrence without using the term.

This algorithmic emphasis reinforced that content is king, which is why you are seeing marketers jump on the content marketing bandwagon. Suddenly webmasters found themselves ranking for keyword queries for which they barely used throughout their website.

Now that you know what co-occurrence is, let’s dive into co-citation…

Co-citation is when one website or brand is mentioned (not linked) by two different sources.

In co-citation, there is a strong content-driven connection between two sites due to their mutual mention of a single website and not because of any actual links between the sites. Some have called it link building without links.

In order for sites to be connected in a co-citation relationship, they must…

Co-citation, then, serves as a signal to the algorithm that the mentioned site is important. These three websites are symbiotically interrelated. Usually, in co-citation, an authoritative site or sites function in a commensalistic role to the less authoritative site(s).

Co-citation and the Interplay of Conventional Linking

You would be hard pressed to find an example of a pure co-citation relationship, stripped of the impact of linking. As mentioned, more commonly in the contemporary SEO landscape, co-citation is seen working alongside the traditional SEO fixture of link building. In such cases, however, “traditional link building” and the transfer of authority can’t accurately predict the way that the search engine, with its co-citational algorithm component, will interpret the connection between two sites. Co-citation changes things in a way that is very difficult to identify from a metrics standpoint.

This phenomenon has been illustrated by Jayson DeMers of AudienceBloom. Notice that two sites — “Site A” and “Site B” have a connection even though they are not linked together. 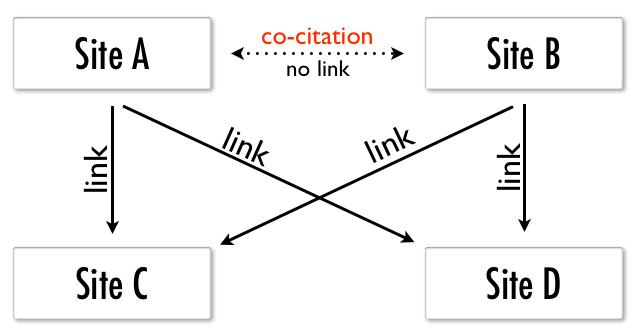 Also, two sites without links between them have a co-citation relationship based on the co-citation power from a single authoritative site (“site A”) that links to both Site B and Site C. 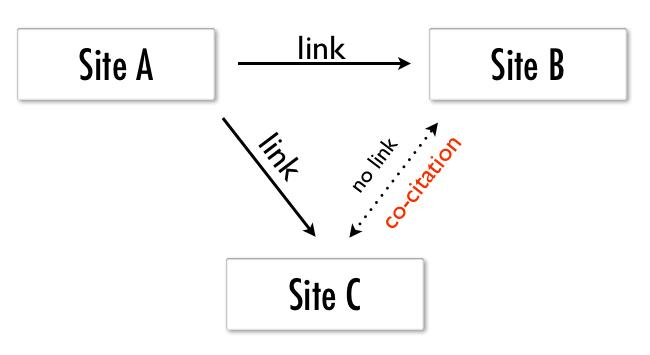 Understanding how co-citation affects three or four sites is comprehensible. But understanding the interrelationship of more begins to boggle the mind. When you consider the complex co-citational interplay of dozens of websites, things get complicated.

How are co-citation and co-occurrence connected?

Most discussions of co-citation and co-occurrence bundle the two together in a single package. Few, however, take pains to disassociate the two. They are different, and here’s how.

In order to achieve co-citation, we have to have co-occurrence. In this article, I pair the two concepts together, because of the way that they serve each other. It is impossible to have a “co-citation strategy” that is separate from a “co-occurrence strategy.” They go together.

How to Implement Co-citation and Co-occurrence

When this concept first began to surface, it was fraught with predictive language.

Rand Fishkin, one of the early birds in the co-occurrence/co-citation discussion said, “This type of SEO is something that’s not very practiced today, but it certainly should be on a lot of people’s minds for the future.” He went on to predict, “Anchor text is actually diminishing as a signal, and is being replaced by something else…That is co-citation [more precisely, co-occurrence].”

We need to decide, however, if it’s something that we should pursue as an SEO best practice. I say “yes.” The future is now.

What I’ve noticed is that “this type of SEO” that Fishkin identified, is in play. The algorithms are already primed to accommodate non-link-driven search. Now is the time to capitalize on the power of co-citation and co-occurrence. Here’s how to do it.

It’s an old piece of advice, but worth repeating in this context. Anchor text is on its way out. For right now, you should stop attempting to optimize anchors.

The entire genesis of the co-occurrence/co-citation discussion centered around the replacement of anchor text. If you are interested in harnessing the power of co-citation for your SEO, then it’s time to reel in your attempts for keyword-rich anchors, and instead, determine how to spread your brand presence and gain mentions.

We’re in an era where keywords matter less and less. You’ve probably noticed this happening in the SERPs.

For example, here’s a query for “best electric sweeper.” None of the top results display my keyword in their snippets or content. The second entry — stick-vacuum-review.toptenreviews.com/ — doesn’t even include the word “electric” or “sweeper”!

Keywords aren’t the driving force in the SERPs for this particular query. Instead, it’s the power of co-occurrence and, presumably, co-citation as well.

As you work on building content, you do not need to worry over the exact long tail keywords to target. The search engines know, because they don’t index keywords alone. They track user behavior and the interplay of co-citation mentions.

3. Build your brand presence and exposure.

SEO is increasingly a PR game. The more your brand is mentioned on the web, the better you’ll perform in search. Brand mentions have a power that is similar to backlinks. When authoritative sites or other brands mention you, your brand gains increased stature in the SERPs.

Building your brand presence will have at least two positive effects.

Be generous with brand association. It is okay to mention competitors, and even to do so in a positive light. Search engine marketing is becoming more about brand building, so let your PR and SEO teams mingle to see how these strategies can better overlap.

Above, I spent some time discussing the interplay of conventional linking, because it still matters, even in a discussion of co-citation. You should continue to use content marketing as your primary link back strategy. Links matter, just not as much.

In a recent video, Matt Cuts addressed the very question burning in many SEO’s minds — “do backlinks matter?” The answer Cuts provided was, in essence, “Yes, but…”

The “but” qualification of his answer was this: “Over time, backlinks will become a little less important.” Cutts is a master of understatement, and we can safely assume that already backlinks are less important, and they will become less and less important with every algorithmic iteration. As a replacement of backlink importance, he says, the significance of authorship and human language rises.

Thus, co-citation is already in play, but should be accompanied by the power of links. At least for now.

As I explained, co-citation is built upon the foundational algorithmically-defined reality of co-occurrence. Co-occurrence insists that you stop obsessing over the head terms and the exact long tail keywords to target, and instead bask in the joy of great content, regardless of keyword presence.

The great thing about implementing co-citation and co-occurrence into your SEO strategy is this: It’s not much different from ordinary content marketing. Sure, there are some emphases that you should keep in mind, but generally speaking, the big idea is the same.

A final point I want to mention is that it really pays to keep up with where search has come, where search is, and where search is going. By staying current with algorithm changes and search engine evolution, you are gaining a competitive advantage. Co-citation and co-occurrence are the kind of major change that we should keep up with.

What are some other ways to implement a proactive co-citation and co-occurrence strategy?