What Can You Learn from These 6 Companies That Thrive On Twitter?

Blog / What Can You Learn from These 6 Companies That Thrive On Twitter?

You may be able to argue about what is the best way to approach Twitter; but you can’t question the benefits of being on Twitter. It’s not just reserved for small, niche companies. I’ll feature some big companies who are succeeding on Twitter by engaging with their followers and giving them valuable information.

If you need a refresher on why a brand should be on Twitter, here are six quick stats:

Despite a recent study that says Facebook is better with engagement than Twitter, it’s still vital for most companies to have a presence on Twitter. The problem is that there are many brands who view Twitter as simply an advertising platform. They don’t aim to engage, but rather to sell.

The brands that get the most out of Twitter are the ones who use it correctly. Below are 6 brands that are taking full advantage of Twitter. 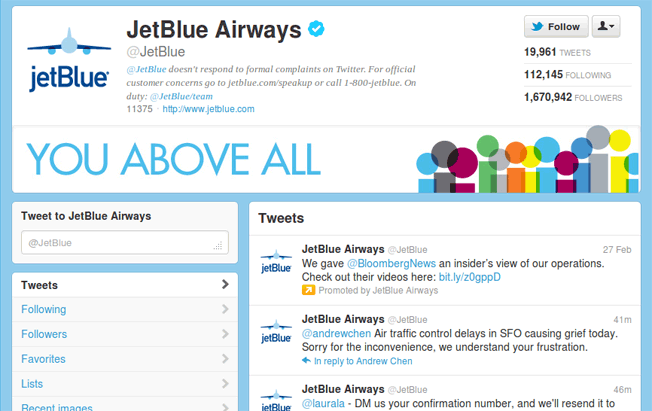 On a few occasions they use Twitter to promote:

JetBlue often does an occasional contest for their Twitter followers.

What you can learn from JetBlue:

JetBlue responds quickly to customer service questions on Twitter. They don’t take any days off (just like their airlines) and are there to help at any time. If your brand is going to go on Twitter for customer service, it’s important to be committed. According to JetBlue,

“Our goal would be to make ourselves available, help whenever possible, and to show that our brand is built by real people who care about our customers.”

They are going where their customers are and being there to help them, not to help themselves by constantly pushing press releases. JetBlue is promoting their brand by having great customer service. It’s a win-win: customers get service on Twitter, while JetBlue publicly displays their quick and responsive service. 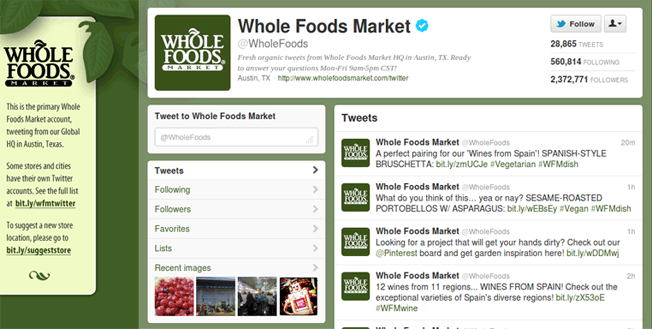 It wouldn’t be much of a list if Whole Foods wasn’t on it. With nearly 2.5 million Twitter followers, it might be tempting for Whole Foods to push product. But they didn’t get that many followers by spamming. Check out their Twitter feed and you’ll see them sharing recipes, @ replying and retweeting.

What you can learn from Whole Foods:

Whole Foods is there to provide value in any way possible. It appears that their goal is not to increase sales by using Twitter, but to serve customers. Be there to give your audience value in the niche that you serve.

If you sell nutritional supplements, offer health advice and put useful content on your site that you can link to. If you sell clothes, offer some of the latest fashion trends. Any business can provide value without having to sell something. Much like the other brands on this list, Staples doesn’t leave any engagement on the table. Their banner isn’t used as an advertisement; instead they use it to get customer feedback. They only promote a couple times a day, often times asking questions to engage:

What you can learn from Staples:

Staples uses Twitter to gather customer feedback and support. Many brands like Staples get the information they hear from customers on Twitter and report it to others in the company. This helps them better understand their customer, which when used effectively can improve a product. See if it’s possible to implement strategy this in your company. Dell combines it all – engagement, promotions, photo sharing and retweets (shows that they’re paying attention). They are able to keep followers informed of what Dell is up to without spamming.

What you can learn from Dell:

It’s important that if you want to constantly promote and offer sales on Twitter, you should consider making a separate Twitter handle for it. They don’t force customer service, advertising and general Dell news all on one account. Be organized so you can give customers a choice on what to follow or who to tweet if it’s right for your brand. 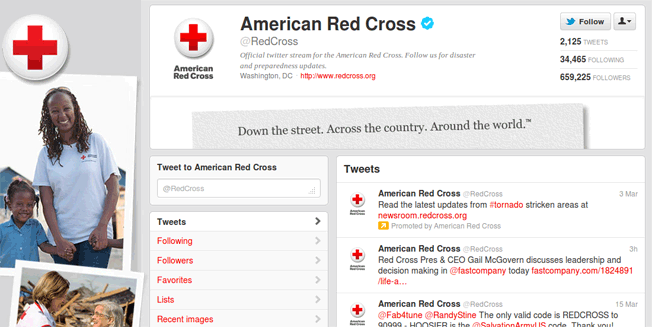 Some would say that the Red Cross twitter stream is a disaster news service. They provide video, photos and retweets to help get people information. If you view some of their tweets, the Red Cross is a lot like a close friend:

They provide tips and how to get help when you need it. They are there to be of value and service to their followers. They know what their role is and they stay true to it on Twitter.

What you can learn from the Red Cross:

Find your voice and remain authentic to that on Twitter. Don’t forget why you started your company in the first place. Stay true to it on Twitter by providing value for the follower. Give them information that they can use. By giving them this useful information, you could become the thought leader and the first place people go when they are in the market for what you’re selling. 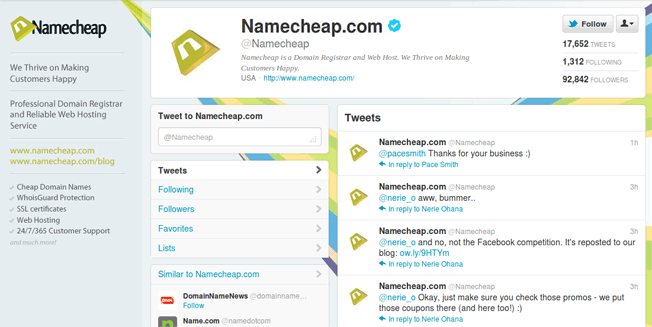 It might seem odd for a domain registar to have a Twitter presence. But Namecheap has done it and managed to get over 90 thousand followers! One of the first things Namecheap did when they started their Twitter account was run a contest. This contest helped increase their followers from 200 to over 4,000 in one month. All of this also lead to a 20% increase in domain registrations!

What you can learn from Namecheap:

Namehceap proves that you don’t have to be the most exciting company to be effective on Twitter. Be there for your customers or anyone who wants to tweet you. Run contests and experiments to see what works.

There are many other brands that are doing an excellent job on Twitter–far more than just 6 companies. What’s important to keep in mind is that someone is voluntarily following you and they are reading your tweets. Value their time by giving them great information & engaging with them. It’s also important to keep in mind that many people join Twitter so they can get deals.

Every company is different. Some find it fitting to give customer support on Twitter, others opt not to. But what’s important is that company’s respond to tweets and engage with people.

“..these are the people that put the cash in your wallet and we are leaving these engagements on the table. It blows my mind.”