“Maintaining an effective culture is so important that it, in fact, trumps even strategy.”

Culture. It’s probably a word you hear often if you follow blogs on entrepreneurship or read articles on business and management. But what is it exactly?

According to Frances Frei and Anne Morriss at Harvard Business Review:

“Culture guides discretionary behavior and it picks up where the employee handbook leaves off. Culture tells us how to respond to an unprecedented service request. It tells us whether to risk telling our bosses about our new ideas, and whether to surface or hide problems. Employees make hundreds of decisions on their own every day, and culture is our guide. Culture tells us what to do when the CEO isn’t in the room, which is of course most of the time.”

This post will cover all of the elements that make great culture. Each culture has different tactics and unique qualities. But, universally, culture is about the employees and making sure they have a fun and productive working environment.

Why Should You Care about Culture?

The workplace should not be something that people dread every day. Employees should look forward to going to their jobs. In fact, they should have a hard time leaving because they enjoy the challenges, their co-workers, and the atmosphere. Jobs shouldn’t provoke stress in employees. While the work may be difficult, the culture shouldn’t add to the stress of the work. On the contrary, the culture should be designed to alleviate the work related stress.

This is why culture matters. Culture sustains employee enthusiasm.

You want happy employees because happiness means more productivity. And when a business is more productive, that means it is working faster; and when it works faster, it can get a leg up on the competition. So it’s worth the investment for companies to build and nourish their culture.

Culture is also a recruiting tool. If you’re looking to hire talented people, it doesn’t make sense to fill your office with cubicles and limit employee freedom. You’ll attract mediocre employees, and you’ll be a mediocre company. If, on the other hand, you have an open working environment with lots of transparency and employee freedom, you’ll attract talent. From the minute people walk in the office, they should know that this is a different place with a unique culture.

When you put a focus on culture, you’ll have guiding principles. People will know you for this. Employees will live by it. It’ll help get you through difficult times. You’ll base hiring and firing decisions on the principles. It’ll help get all employees working on the same company mission. In some sense, it’s the glue that keeps the company together.

If your company ramps up to more employees, the culture will become a self-selecting mechanism for employees and candidates. The people who would fit into your culture become attracted to it and may end up with a job. For example, at Amazon, they look for inventors and pioneers. People who want to work there know this and are attracted by it.

Now, let’s get into the elements that make great company culture…

1. Hiring People Who Fit Your Culture

Tech Journalist Robert Scoble meets with a lot of CEOs. And when talking about hiring decisions, they always try to make sure they don’t hire jerks. It’s for this reason that companies have such a rigorous hiring process. Some companies like to bring job candidates in to work with their employees for a week. They give the candidates a project and see how they work and how they work with others.

Zappos CEO Tony Hsieh, one of the strongest advocates of culture, makes a great point when he notes that the people you hire represent your company even outside of work. If you meet someone and they tell you where they work, your perception of that place will change based on your opinion of the person. If they’re nice, you’ll view the company in a positive light. If they’re a jerk, you won’t view the company favorably. This effect can be even greater when it’s a company you’ve never heard of and didn’t previously have any opinion of. If the person is helpful, you’ll view the company as helpful. This is why it’s important to hire people who share your company’s values.

One bad hire can affect an entire department and possibly dozens of customers. And it can happen quickly, acting like a virus that spreads. The employees will talk about the bad hire; and if action isn’t taken, it can get much worse.

But the good thing is that any damage can be reversed. And more than that, your values can be reinforced at the same time. If you release that toxic employee (the vampire), it’ll show other employees that you appreciate them and are serious about your culture.

2. Having Employees Know the Values and the Mission of the Company

There’s a question that often gets asked in job interviews:

Why do you want to work here?

Of course, an interview will show only so much. A person can be whoever they want to be for 30-60 minutes. The only real way to know if someone is on board with the values and mission of a company is to watch them work for an extended period of time. Do they follow the same values in their personal life? This is why you need to really get to know the serious candidates.

Zappos has their core values. They guide how employees work and enjoy their personal lives.

When employees are passionate about the values and mission (like organizing the world’s information at Google), they are dedicated to accomplishing the goal.

In a video on the Facebook Careers page, Mark Zuckerberg says:

“The reason why we’ve built a company is because I think a company is by far the best way to get the best people together and align their incentives around doing something great.”

At Facebook, it’s about making the world more open and connected. These drive the employees, guide the product, and energize the entire company. If an employee isn’t committed to the mission, it just becomes another job. And when it’s just another job, it usually means the employee isn’t happy.

On the other hand, when the employee is on board with the mission, they’re engaged in the job and want to help the mission succeed, thus helping the company succeed.

3. Knowing That Good Decisions Can Come from Anywhere

No one has all the answers. A company where only management makes decisions is a surefire way to send A and B players away to other companies.

As some companies get bigger, they tend to limit employee freedom. The employees are less and less involved in key decisions and their impact on the business is drowned out. It becomes a part of the culture. Employees go to work, do what they’re told, and just help someone else achieve their dream. The worker’s impact on the business is minimal and they become “just another employee at just another company.” And for some people, it’s all they want: go into work, take orders, do the job, and wait for the clock to hit 5:00 P.M.

But this is not what the best employees want.

They want to have a voice and a meaningful impact on the company and its direction. They know that anyone can win a debate with the most senior person at a company. They also know they can create tools for the company without the need for management approval.

For instance, the Google News tool was created by a research scientist at Google named Krishna Bharat. Creating Google News wasn’t something that came from a management meeting and descended upon Bharat. He invented it after the September 11 attacks because he figured “it would be useful to see news reporting from multiple sources on a given topic assembled in one place.” It came from a problem that he was having; he wasn’t instructed to create it.

Companies have greater success when employees are given this type of freedom that isn’t ruled by a hierarchy, assuming they’re talented employees who fit the culture. Knowing that good decisions can come from anywhere and expanding employee freedom are cornerstones of attracting talented individuals who will fit into the culture if you let them.

4. Realizing You’re a Team and Not a Bunch of Individuals

Ever notice how many CEOs refer to their employees as a “team”?

On the Instagram jobs page, they refer to themselves as a team, not a company. 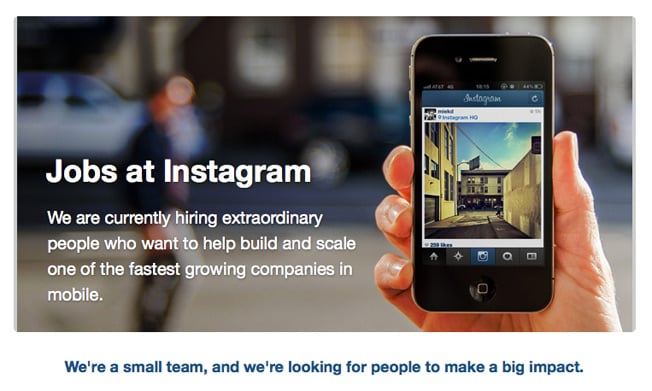 Quora has a “Team” page, not an “Employees” Page: 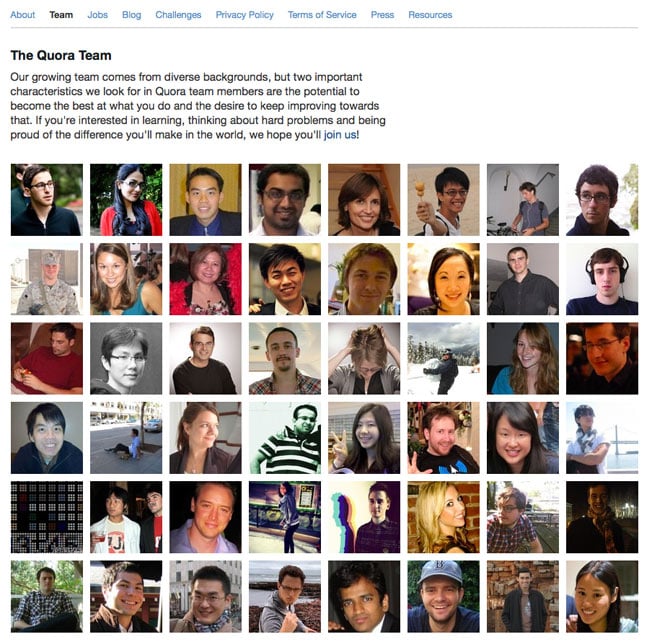 The difference between being a team and just a bunch of individuals is that the individuals see themselves as separate from each other. Helping others is forced because you normally operate on your own projects, or your own part in a larger project.

Teams work together on all work related projects and help where necessary. It doesn’t matter who gets credit for what because you accomplish everything together. You’re knit together, not separated.

If you watch sports, you see how teams function. They work together (in the form of passes and assists), encourage each other, and communicate regularly (communication on the sidelines when they’re not playing). There are always a few who get accused of putting themselves before the team, known as a ball hog in basketball. This is because they “hog” the ball and don’t involve any of their teammates in the offense. This impairs the offense which cannot work at 100% because not all 5 players are fully involved.

These people are usually dealt with appropriately at the direction of the head coach. They usually see decreased playing time or are cut from the team. Teams work best when everyone is on board, feeding off each other, and playing together. If you have a bunch of individuals, or ball hogs, they’ll break down from conflicts, become ineffective, and then irrelevant. Teams are the best and most efficient way to get things done.

In the coming weeks, we’ll be profiling different company cultures. We’ll take a look at Google’s culture and what makes it so effective and unique. We’ll examine Zappos and their customer service centered culture, Facebook’s engineering heavy culture, and many others. Stay tuned for more!

What other elements are important for company culture? Let me know in the comments!