It’s pretty well documented that Google has a unique culture. It’s not the typical corporate culture. In fact, just by looking at pictures inside the Googleplex, you can see that it looks more like an adult playground, not a place for work.

But Google’s success can be attributed to this culture. Google has people who’s sole job is to keep employees happy and maintain productivity. It may sound too controlling to some, but it’s how this world-changing organization operates.

So can Google’s culture teach us anything?

Google bases nearly everything off data, and while some of what’s below may work best only for Google, there are surely other areas that can work for all companies, regardless of size.

When learning about Google’s culture, one of the people you need to know of is Laszlo Bock. He is the head of People Operations, known by many companies as ‘Human Resources’. People operations are where science and human resources intersect. And it’s what keeps Google a top performing company.

In this post we’ll examine how Google recruits, develops, and retains the employees. Let’s get started.

Each year, Google gets over 2.5 million applicants. That’s equal to 6,849 per day and about 5 per minute – and Google reviews each one. Don Dodge, a current Google employee shows how thorough Google is with each applicant. What’s not important is the logistics of each hire, but why they hire this way and what we can learn from it. Because it’s the people that make Google what they are today.

When you get interviewed at Google, you’ll receive questions like:

“How many golf balls can fit in a school bus?”

“There are 8 balls. Seven of them weigh the same, but one is heavier. Using a balance scale, how do you find the heavier ball with just two weighings?”

“You are shrunk to the height of a nickel and your mass is proportionally reduced so as to maintain your original density. You are then thrown into an empty glass blender. The blades will start moving in 60 seconds. What do you do?”

Google says the answer isn’t as important as your thought process and how you think under pressure. The worst possible answer would be a non-answer. Quickly saying “I don’t know” won’t get you a job at Google.

These interview questions may seem unnecessary to some, but they are one method Google uses to filter and find the smartest, most thoughtful candidates. If you want to run an extraordinary company, you need to hire extraordinary people. And to do that, you need to be very good at hiring and firing.

Update: Bock has announced that Google is no longer throwing brain teasers at their interviewees, calling them “a complete waste of time” that only make the interviewer feel smarter. Google now relies on more on “structured behavioral interviews”. They ask the interviewee a question like “give me an example of a time when you solved an analytically difficult problem.” The interviewer can then see how the applicant interacted with a real world situation as well as find out what the interviewee finds difficult. When looking for leaders, Google tries to hire those who have a track record of consistency.

Other times, Google recruits employees by “acqui-hiring”. A few of the well-known cases have been Milk (which got Kevin Rose), Meebo (which got Seth Sternberg and others), and Slide (which got Max Levchin who has since departed). Sometimes the best talent isn’t out there looking for a job; they’re already locked up with other projects.

This is how Google hires people. Part of how it attracts, retains, and keeps employees happy is by having a great culture with awesome perks. Let’s get into that now.

First, let’s look at the perks of being a Google employee:

Obviously, all these perks come at a cost for Google. But so does employee dissatisfaction and high turnover. There is a lot of competition for talent in Silicon Valley (and around the globe for that matter) and when you can retain your employees, it means less time and money spent recruiting.

This culture has paid off for Google, as they consistently rank among the best places to work. They’ve lost hundreds of employees to Facebook and many others who have started VC firms or started their own startups. It’s one of the consequences of hiring smart, talented, and ambitious people. No matter how good the culture is, many of them receive enticing offers from other places or wish to start their own ventures.

A Culture Built on Qualitative and Quantitative Data

Human resources, or People Operations, is a science at Google. They’re always testing to find ways to optimize their people, both in terms of happiness and performance. In fact, almost everything Google does is based off data. So it should come as no surprise that Google uses all sorts of data to gauge employees and improve their productivity.

Let’s look into what Prasad Setty and his People Analytics team at Google have discovered:

Lunch Lines: You know by now that Google offers free meals and snacks to all of its employees. So what’s the optimal lunch line? At what point is it too long where people waste time and too short where people don’t get to meet anyone new? What’s the prime happy medium? According to Google it’s about three to four minutes. Any longer and they may waste time, any shorter and they don’t get to meet new people.

Lunch Tables: If you want employees to meet each other, make the tables long. This will expose them to more people who they can get to know.

Paid Time Off for New Mothers: Google found that women were leaving the company at twice the rate of everyone else. In particular, this occurred with new mothers. Google’s maternity leave plan was 12 weeks paid time off. Laszlo Bock changed the plan so new mothers could get 5 months paid time off with full pay and benefits. They were allowed to split this time up however they want (i.e. taking a few days off before expecting). The result after the change in policy? A 50% reduction in attrition for new mothers.

Diner Booths vs. Conference Rooms: Laszlo and his team have found that diner booths work better than conference rooms for facilitating creativity. David Radcliffe, the man in charge of creating the perfect work environment, says that:

“Casual collisions are what we try and create in the work environment. You can’t schedule innovation, you can’t schedule idea generation and so when we think our facilities around the world we’re really looking for little opportunities for engineers or for creative people to come together.”

Managers Do Make a Difference: If you haven’t already read the article from New York Times on Google’s Quest to Build a Better Boss, you should. It busts the myth that managers don’t make a difference. Here’s what they found: 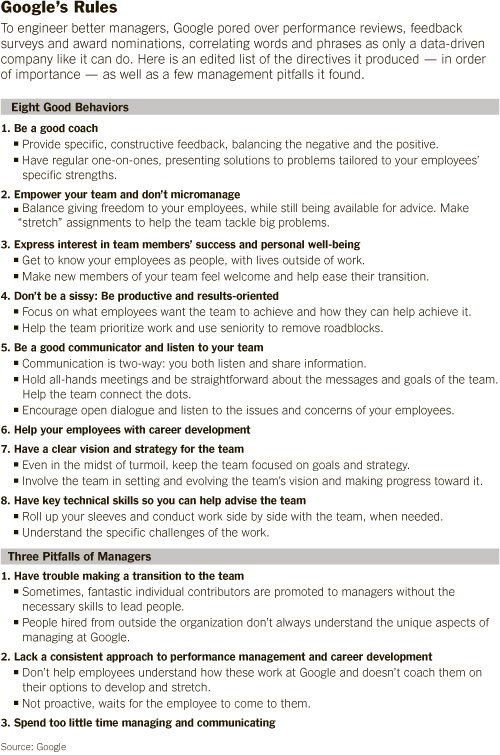 Just because an engineer is ten times more productive doesn’t mean they’ll be the best manager, according to Google. While having deep technical knowledge is important, it ranks as the least important of the 8.

On April 4, 2011 Larry Page officially became the CEO of Google, replacing Eric Schmidt. Google had a few issues facing them at the time of the CEO transition, including:

What’s changes have there been since Page became the leader?

They’ve also experimented in some interesting areas, such as self-driving cars, the Google “x phone”, Project Glass (which is now Google Glass), and likely a few others that are still kept secret. Check out this Fast Company article if you’re interested in learning more about Google X.

Page has said that it’s in Google’s DNA to experiment, and that only making a few products like Apple is “unsatisfying”. He says:

“You know, we always have these debates: We have all this money, we have all these people, why aren’t we doing more stuff? You may say that Apple only does a very, very small number of things, and that’s working pretty well for them. But I find that unsatisfying. I feel like there are all these opportunities in the world to use technology to make people’s lives better. At Google we’re attacking maybe 0.1 percent of that space. And all the tech companies combined are only at like 1 percent. That means there’s 99 percent virgin territory. Investors always worry, “Oh, you guys are going to spend too much money on these crazy things.” But those are now the things they’re most excited about—YouTube, Chrome, Android. If you’re not doing some things that are crazy, then you’re doing the wrong things.”

Update: On August 10, 2015 Larry Page stepped down as CEO of Google. Sundar Pichai was appointed to replace Page, while Page became CEO of the newly-formed Alphabet, Inc, Google’s parent company.

If businesses want to attract top tiered talent that isn’t consumed by making money, they’ll need to focus on making a great working culture. This includes the work atmosphere, to the work done, to employee freedom.

And Google doesn’t view their culture as a “set it and forget it” program. They’re actively changing and maintaining it, because it’s crucial to their success. With any business, it all starts with people. And if you want to run great business, you need great people. One way to get them there and keep them is by making their work fun. As Mark Twain said:

“Work and play are words used to describe the same thing under differing conditions.”