One thing that will never wane in this world is the human desire for news.

And, these days, people are consuming their news online. According to 2018 research by the Pew Research Center, one in three Americans prefers to read their news online—the second-most-popular medium after television.

And, it’s not just consumers who are reading the news online. It’s just about everyone. While some SEOs would infer that press releases are merely an SEO tool, such couldn’t be further from the truth. If a release is engaging enough, it also can do the following: generate social signals and chatter and sharing; direct targeted and organic traffic back to a website; and create journalistic interest abroad. This is all in addition to the sweet maraschino cherry on top – vast news and major media coverage.

To get all of these pretty little amenities nicely wrapped up with a big, red bow on top, you’ll have to play by the rules. In this regard, it’s better to think of press releases the way you would think of being covered in a tier-one newspaper for a major story.

A press release provides you with the ability to spread the word about your company, its doings, and its offerings in an ethical, journalistic-minded manner that’s focused on newsworthiness and branding over SEO, social media, or anything else. The simple tenets of who, what, where, why, and when easily apply (the five Ws).

Along the way, you’ll assuredly benefit from minding these 12 unbreakable rules for obtaining publicity.

Rule No. 1: Know How to Write a Press Release

If you have never written a press release before, you should consider using a professional writer or service. Press releases are about telling a story, your story. The truth is that writing from a journalistic approach takes years of studying and practice. That’s not to say that any good writer isn’t capable of doing it; it’s just to say that you will want to be as knowledgeable as a professional or hire one.

Press releases have to cover something that is newsworthy. A PR Daily article outlines six necessary AP style guide steps you ought to take when composing your release to assure that it’s newsworthy. They include: stating your objective clearly, using the five Ws, minding your spacing, using proper grammar and style, and showing names and titles correctly and appropriately. The proper format for writing an effective press release

Rule No. 2: Know Your Audience

Writing for your audience is critical when producing any piece of content you intend to market. A bit of demographical research will go a long way toward achieving this goal. For example, if your target market consists of the 45-and-over age group, using modern terms that don’t appeal to them won’t do much to help you gain traction. Understand your audience and who you are writing for before you craft your newsworthy release.

All releases are targeted when you set them up to go out for distribution. Proper targeting can often mean the difference between thousands of reads and plenty of traffic streaming back to your money website or the lack thereof. Be sure you research every single industry your company, products, or services apply to before you set your industry targets pre-distribution. Remember that press releases are a major form of branding, something that is exponentially vital in the online marketing world of the present day. SEO has shifted to being more about branding and engaging content than about getting backlinks.

According to Business Know How, the best way to write a classy elevator pitch that has viral potential is to have the following information at hand: knowledge of your brand, products, and services; an understanding of your market; research on what your competition is doing, and an awareness of the competitive edge you have to offer.

Still, you’ll also want to add some spice, bravado, and swagger to your headline to capture more attention. A boring and stagnant headline may be newsworthy, but that doesn’t mean it’s not making people pull their hair out when they read it. Read more on these in an article by TechCrunch. An example of the most amazing press release ever written

Bad PR Titles – As an example, let’s say you own a software company that is releasing its next version with a much-anticipated update that users have begged for the past few years. You could propose a boring title like: “XYZ Software Company Announces Newest Version of XYZ Pro.” This title certainly is newsworthy. It’s definitely going to get approved by the editors. But, the problem is that it’s boring. It does nothing to engage the reader.

Rule No. 5: Abide by the Editing Process

Editors at press release distribution services, newspapers, and online news websites are stringent. You’ve got to bear in mind that they are all fervent studiers of the English language, AP style, tone, and prose. They don’t see any wiggle room in proper grammar or adherence to style; they see only black and white with no spatial gray area in between.

A Community Tool Box publication offers some tips on avoiding press release rejection by using proper grammar, spelling, titles, style, and prose. Remember, editors won’t fix your document for you; that’s on you. They might make minor changes.

However, if your release is not almost picture-perfect, it will go in the rejection pile with all of the other shoddily composed (and promptly rejected) news releases that editors get bombarded with day after day. Read this article by the Torontoist to find out what editors – like the one at the Star, who was mentioned in the article – do when they are over-inundated with error-prone articles and news releases. Rule No. 6: Collaborate to Succeed

Teamwork will go very far in helping to develop an effective press release. Collaboration is how some of the finest marketing pieces are created. So why limit the idea of the piece and its composition to just your ideas? Rather, brainstorm with a few others and co-create and co-write the piece together. This will result in unrivaled clarity and perception, and it can drastically enhance the quality as well as the reader engagement of the release overall.

Cross promoting is often referred to by many in the industry as the “Free Form of Advertising,” which is exactly how the Edward Lowe Foundation references it. Cross promoting can exist across vast mediums, with public relations being one of them.

Finding a cross-promotion partner is easy if you already do business with them. Imagine splitting the cost of the press release distribution and syndication to promote a dual effort that thereby attracts more customers and enhances your credibility simultaneously. Reaching out to a few business partners may be all that it takes to gain a cross-promotion partner for your next PR campaign.

Rule No. 8: Use Quality Distribution Channels

There’s a lot of squabble online about which press release distribution service is the best. Speaking from personal experience, there are only a handful that are even worth using. I’ve nailed Wall Street Journal time and time again using Berkshire Hathaway’s Business Wire, but it costs $400 or more for a release with a 400-word limit. (They charge you for each 100 words after that.) You’ll also pay a pretty penny to add photos, videos, social media signals, and so forth.

Second to that, Marketwire gets decent traction and features an awesome dashboard with good analytics. PR Web is the most profitable of all distribution services but still charges nearly as much for tier-one distribution as the other services. As for add-ons, you get more bang for your buck on PR Web because you can add videos, images, and hyperlinks for free. Other services to consider include: PR Newswire, SB Wire, and 1888PressReleases. Syndicating your press release is very important. Sure, it’s going out to all of these places. However, if you don’t take some additional “traction-action” yourself, you could be essentially wasting your own time and money.

Ensure that your social channels are all set up to syndicate your press release. Key channels to consider include: Facebook, Twitter, YouTube, LinkedIn, Reddit, Pinterest, Instagram, Google Plus, Delicious, and Pitch Engine. When syndicating your press release, you will want to access the dashboard and find different major mediums that it was posted to for distribution. Use a different medium for each social channel syndication. For example: 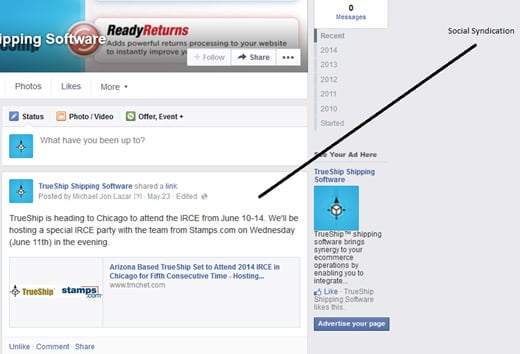 Syndicate your press release post-distribution through your social channels

There’s only one service I’d recommend for the syndication of your press release on social channels and that service is Pitch Engine. This is a social branding and marketing distribution service that you piggyback with your press release. It allows you to track social analytics and traction as you gain more headway. It’s advised you write an entirely unique carbon copy of the actual release you are posting (through conventional distribution channels) and use that post with Pitch Engine to gain even more traction.

Also, when you do syndicate your actual release on social media (as explained above), make sure you consider boosting those posts to spread brand awareness and to garner more social signals and create chatter. Avoid reposting the actual press release on your website because this can denigrate your content authenticity and page-score ranking with Google and the other search engines. Instead, write a unique teaser paragraph or two, and then link out to the release on the host site that distributed it or one of the major media outlets that picked it up.

This greatly enhances credibility with your site visitors because they see that you were just covered in the New York Times (and they can read your full release on that portal instead of reading it on your site). Imagine how that makes them feel about your brand.

Rule No. 12: Enhance Your Release with SEO and Pictures

There are a few add-ons that most press release distribution services offer which are very worthwhile and that should be considered as part of your distribution strategy. The first is the SEO enhancement feature. By all means opt for do-follow hyperlinks. A few more high PR backlinks will never hurt your website.

Consider expanded distribution to hit more major mediums, albeit at an increased cost. For example, if you are a multinational company, consider worldwide distribution with AP Newswire syndication. If you are a domestic company, target national regions to hit every major news medium in the continental U.S., as opposed to the limited newsfeeds that are in your set geo-region.

Finally, pictures, video, and sound files are worth a million words. If you add these intrinsically viable multimedia elements to your press release, they will aid you in gaining that desirable, palpable, and viral tenacity that equates to good content marketing, effective branding, and enhanced credibility. Ultimately, the future of your public relations – and your brand’s reputation – is in your hands. So tread carefully and make the most of it.

About the Author: Michael Lazar is a veteran freelance copywriter and SEO expert with a specific passion for Public Relations. He is a PR and Branding specialist at ReadyCloud, where he heads their online marketing operations as their Senior Growth Hacker.