Why Clickbait Works (And Why You Should Do More of It)

Fake news is squarely in the spotlight.

It rode to prominence on the back of an absurd 2016 election (wait… that was a dream, right?!).

Since then, a slew of companies including Google and Facebook have publicly declared it Enemy #1. Any whiff of fake news, especially any salacious titles, and you can expect extra scrutiny.

But here’s the thing.

Clickbait gets a bad rap. When done correctly, it’s one of the best ways to get people to take notice and give you their most precious asset: attention.

Here’s why, despite your hesitancy or bold proclamations from companies, you should be using more of it.

This Unbelievable Copywriting Hack Will Save Your Job (Details Below)

We could talk stats all day.

We could talk about how consumers are bombarded by hundreds or thousands of advertisements and sales messages today. That it’s never been higher in the history of humanity. Shock! Awe! Blah blah blah. You’ve heard it all before.

But you already see it. Daily.

And you see it each time a new piece of content goes live to obscurity and crickets.
Basic Economics 101. Competition continues to increase. Which means it’s harder to breakthrough than ever before.

If only there were a solution – a hack! – that could help you cut through the clutter. To breakthrough the noise and get your stuff read. To increase the amount of people whose lives you can directly improve by solving their problems (it does help people, doesn’t it?).

But only if you’re willing to look….

We humans are simple creatures at the end of the day. Sure, we try to act smart. We look the part. However even the smallest inkling of danger or terror and we squeal like school kids.

At the end of the day, we just want to be loved, eat, sleep, not die, and get a little lucky procreate to further the human race. Clickbait knows this. Acknowledges it. Understands it intimately.

It tickles our curiosity while dumbing down concepts into a common language we can all understand. Like: fear, greed, jealousy, envy, lust, and more.

A completely-legitimate research study of 69,907 showed that the most powerful headlines are polarizing.

The stuff at the extremes, whether overly positive or overly negative, generated the most interest. Pattern interruption shocks us out of dazed and confused routine. It presents an “information-gap” that we want, no NEED, to fill.

In a world faced with endless choices and options, we freeze. Clickbait is the way out. For both consumers (by simplifying their lives) and us marketers (‘cause it gets results).

But we’re not curing cancer here. We’re not sending people to Mars or building sexy, luxury, electric vehicles that will one-day wean society off of declining fossil fuels.

So let’s get real. Lighten up. Have a little fun.

You gotta problem. We all do. There’s a clear way out of this mess. For now anyway.

Take the red pill and let’s get this party started.

In fact, it’s been happening for decades.

Does this ring any bells? 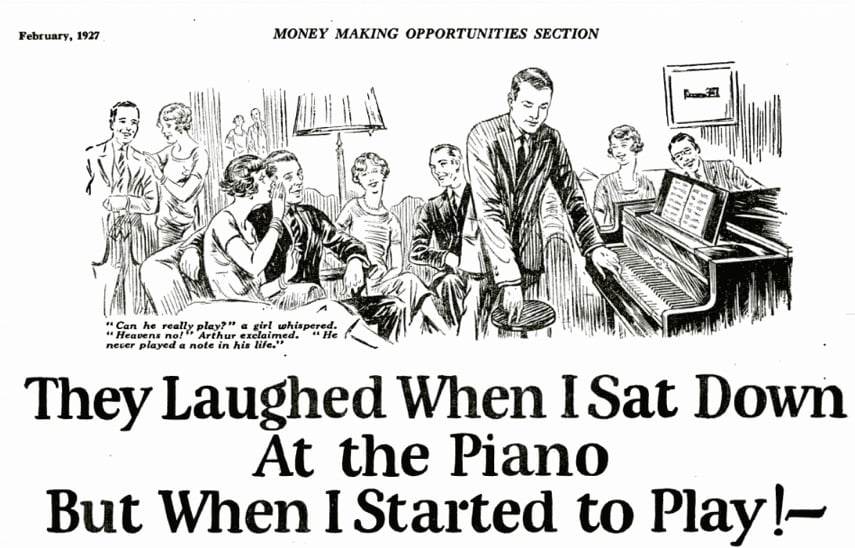 It should. It’s only been ripped off and repurposed thousands of times since it was originally published.

It used storytelling. To build interest. Connect with an audience. And get them to send in their information for a free product.

It was written by a dude named John Caples. A successful copywriter who also wrote Tested Advertising Methods. Which is like a sequel to Scientific Advertising, widely considered one of the best books on the topic. (Except unlike most other sequels, this one didn’t suck).

Here he is again: Sure looks and sounds and tastes like some good clickbait to me. A mirror image of what you might see today on info-pedaling sites across the interwebs.

And yet once again, this little ditty comes from the Roaring 20’s (or more accurately, the latter half during the Great Depression).

See. That’s what good clickbait does. It provides hope. For people experiencing the worst economic meltdown of all time.

It doesn’t lie or swindle or fool. The people behind the clickbait do that when their stuff sucks and can’t back up their claims.

Valueless work that owes more to sensationalism than research and investigation even has a name: yellow journalism.

The name comes from yellow cartoon strips that were inserted into newspapers, who were worried about increasing circulation in a time of massive competition and waning consumer preferences.

But we’re not talking this decade. Or the last. But waaaaaaaaaaay back in the 1800s.

So don’t shoot the messenger.

Because it wasn’t invented by Buzzstream to net pageviews. They may have perfected the art form. (Despite laughable claims otherwise.)

Seriously. Want to write better headlines? Want to stand out? Get attention? Drive more people into your products or services?

But you’ll thank me later. When your blog posts start getting shared. When emails start getting clicked. When ads actually drive some revenue to hit your goals, please your boss or client, and you can finally take a vacation one of these days.

BuzzFeed didn’t invent any of this. They just do it better than anyone else.

Their specific examples are absurd, of course. You’d never want to use them word-for-word on your buttoned-up website that caters to insurance agents.

But. You can look at what they’re doing, understand the basic fundamentals of why it works, and adapt accordingly.

Newsjacking’s been around forever. A classic PR technique even, to piggyback on successful brands in the news.

But you can also use it to unexpectedly ‘bridge the gap’ between your [boring] topic and something people care about deeply that’s top-of-mind. 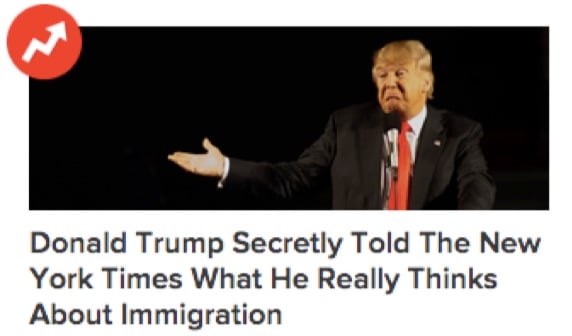 Literally anything related to Mr. President is sure to drive attention these days. Which mean anything he says or does or executive order’s. And c’mon, that’s almost an endless supply these days… do I have to do all the work here?

Look at the other stuff going on in this headline though. [Someone Important] “Secretly Told” [Someone/Something] “What He Really Thinks About” [Important Topic]. Adapt the wording in quotes and play some mad libs with a competitor or even a trend you’re against. Remember: polarizing sticks out.

Just ask fake news hustler John Egan from Vancouver, Canada, who told The New York Times that his pro-Clinton site didn’t take off as expected during the election. But when he switched to anti-Clinton, things hit a fever pitch:

“It’s all Trump. People go nuts for it.”

The Hot Topic (you know, kinda like that lame goth store in second-rate malls that probably sells Korn shirts… are they still around?) is similar to the last in that it’s ‘newsworthy’.

That’s a good thing. It means it gets attention. People care about it (one way or another). And it you can leverage that to gain eyeballs to your boring thing.

Check out this sensitive topic:

Okay. Pushing the envelope a bit. You might want to dial it back. But still. It perfectly appeals to a specific audience and plays against the fears, stereotypes, realities, and challenges they face.

What else might get people to “treat you differently”? There’s your hook.

The best for last. My favorite. The Cliffhanger is pattern interruption at it finest. It teases just enough that there’s no way you can’t click to see more.

See. This one is so easy. “Things Nobody Tells You About” [Problem Your Customers Face].

And on and on and on. You can even spice things up a bit and throw a number in front of “Things”.

I can already hear it now.

The objections. The excuses.

“But clickbait won’t work in MY industry.” “Those examples wouldn’t work with MY customers.”

So. I pulled up ESPNFC. Clicked on a random article. Scrolled to the bottom of it. And started taking screenshots of the Outbrain syndicated articles that popped up.

(Think these ads are a waste of time? Go read this. Different channel, same principles. You gotta get eyeballs and attention before you can convert it into new customers.) 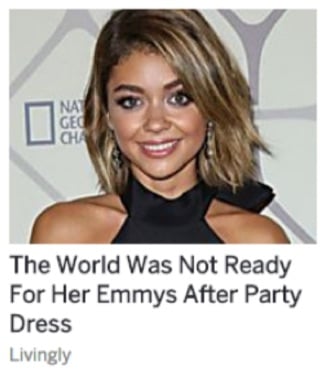 This ad could work for just about any retail site, product, or service that caters to women.

Celebrity in the picture? Check.

Mystery & intrigue (“The World Was Not Ready”)? Check. 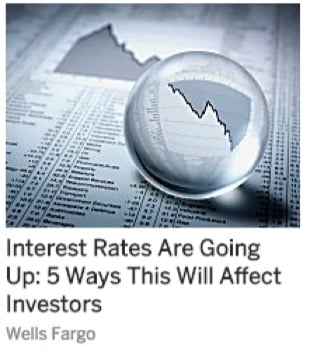 Interest rates are about as boring and mundane as it gets. Important, sure. Boring, nonetheless. Trust me. I have a (worthless) degree in Finance to show for it.

And yet something about this title makes makes you want to click to find out more. It’s the cliffhanger from above (as evidenced by the phrase “this will affect”). It hints at future problems or issues that you should know about (but don’t currently). It creates an information gap that you now have to search out to close.

Just toned down a bit. 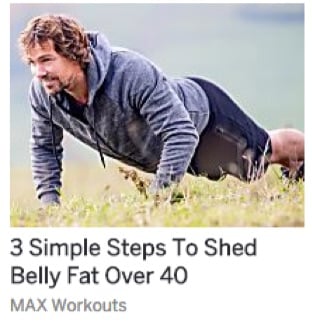 C’mon. Nobody likes that. Not even the people with dad bods. You know, old dudes with kids and a desk job.

Guess where those power lunches and happy hours and food trucks go?

This ad names that problem, for that audience, specifically. Which is key.

The odd (prefered to even) numbered list and “simple steps” speaks to a zen-like simplicity in the solution.

While “shed” is a classic power word. 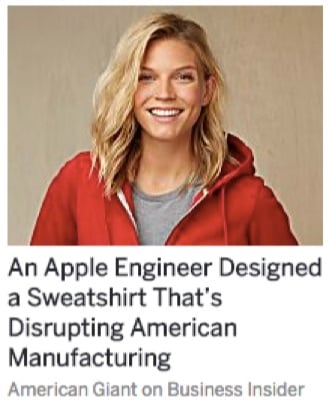 This ad is good.

A photo of a realistic woman looking directly at you. (People like eyes.)

Once again, doesn’t get anymore basic and boring than American manufacturing. From a content and advertising point-of-view.

And yet this ad manages to somehow leap off the page. Thanks in large part to emphasizing what’s interesting or unique, FIRST, before going into detail about their own offering. Let’s be honest with each other.

Nobody likes the dentist. We delay visiting as long as humanly possible.

It’s awkward and uncomfortable. So dentists, like it not, gotta sell.

Insurance doesn’t force us to specific dentists like other medical professions. We shop around. So it’s no different than looking for an auto-body shop to fix your car. (Okay, maybe a little different.)

Dental implants can also be expensive. It’s not a decision to take lightly.

Which means the same content and information-assisted selling technique not only apply, but are required.

Clickbait has a negative connotation associated with it.

Because we’re on high alert for the bad kind of clickbait: the empty hyperbole and salacious claims sold by swindlers and tricksters.

Those people give a bad name to clickbait. Because it’s not all bad.

If you believe in what you’re selling and that it can truly help people, it’s your obligation to do whatever it takes to get it in their hands.

In that vein, there’s nothing wrong with clickbait. There’s a reason it’s been in use, successfully, for decades (and almost centuries).

It’s because it works.

It uses well-worn, psychological patterns that people are already looking for. It gives them what they need, when they need it.