In a consumer-first, innovation-driven social world, Apple is the odd man out. Considering that its rivals, Google, Microsoft and Samsung have millions of followers on Twitter, Apple stands out as a solitary example of how “thinking different” can translate to “we’re not participating.”

But what’s the reasoning behind their move? Is it sheer obstinate behavior? An unwillingness to conform or “get with the times”? Or is there something deeper behind their decision? And can we learn anything from it? Read on for all the answers.

Many Branches Feed into the Apple Tree

Just because there’s no official @Apple Twitter account (there is an account, but it’s graced with the early-bird egg avatar and is likely not related to the tech giant), doesn’t mean Apple’s not keeping a close eye on how and where its products and services are mentioned. 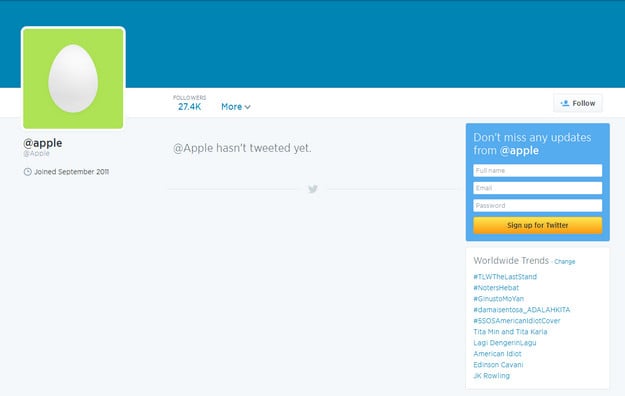 There are plenty of @iTunes accounts, for @iTunesMusic, @iTunesMovies and @iTunesPodcasts to name a few. The @AppStore and @iBooks are also on Twitter, not to mention the hordes of Mac-related bloggers and product reviewers. 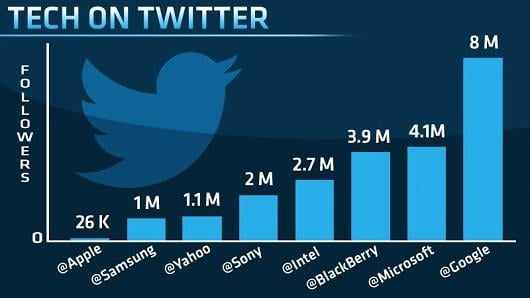 You can bet that although there’s no official presence, Apple is hovering nearby, like a keen-eyed mother hen watching over her “chicks”. With a variety of smaller “branches” dedicated to its products and services, Apple gets away with its lack of a centralized account. Even @iPhoneTeam, which has nearly 400,000 followers, is manned by an unrelated mobile development company.

In Apple’s mind, the decision is simple: why bother tweeting out product announcements and new developments when our legion of fans will do it for us? Plus, it’s not like Apple to run any door-buster specials anytime soon… (*hopeful sigh*)

According to CNBC, Apple has a strict schedule in terms of product introductions. If they suddenly appeared on Twitter and shifted their existing schedule, the markets would read that unlikely turn of events as Apple caving into social pressure – not exactly the image you want to convey when you’re so busy trying to maintain the “premium experience”.

In his CNBC interview, Brian Sozzi noted that “Apple has nothing to gain by creating an account.” Furthermore, he explained that “[t]here is no way Apple is going to take questions via the Twitter universe [about its earnings reports]… Apple isn’t going to be like Starbucks and run promoted tweets offering dollars off a product for a limited time…You go to Apple, they do not go to you.”

But is everything centered around shareholders? That’s one piece of the puzzle, but the underlying theme that bleeds through the conversation is that Apple wants:

An Iron Grip on Communications

In their frame of mind – if you can’t control it, why bother? It’s that kind of tight-fisted controlling grip that has users split on whether or not there should even be a voice for @Apple. On one hand, there are the droves of people who love the company and its products regardless of whether or not it embraces social media. Then there are those who’ve had problems and need a place to vent or just ask questions.

Unfortunately for the latter, there’s not much relief. Apple has created a presence for itself on a variety of other social networks, including YouTube, LinkedIn (for job postings) and Facebook, but it’s pretty much a ghost town.

Even Apple-sponsored YouTube videos, like the one below showcasing the many unique and ingenious ways to use the iPad, invites users to create their own stories – but not on YouTube’s comments section, where comments have been disabled.

Instead, the video links to Apple’s own site with more in-depth looks at the personalities profiled in the video. Although it’s called “Your Verse”, you can’t add a single line of “poetry” to any of the profiles or pages. It’s a very “look, but don’t speak” kind of setup. And that’s precisely the way Apple likes it.

So Why Hasn’t Their Strategy Backfired?

Imagine for a moment that Google had followed this exact same strategy. Or Amazon. Or Microsoft. Would people be outraged? You bet. Apple “gets away” with it (and I use that phrase lightly) simply because they pride themselves on being “just that good.” If Microsoft or Google had mimicked Apple’s move, the view would be shifted to a very David-and-Goliath sort of battlefield. The company’s not listening to us. They don’t care about what we have to say.

But is Apple really so different? Had Twitter existed before 2001 when the first iPod was introduced, Apple would’ve likely grabbed for any slide of positive media mention it could get its hands on. Times were markedly different, and the world thought it didn’t need another Walkman.

Few companies have experienced such a 180-degree shift as Apple. But are they letting their success go to their head? Or are they making a smart pre-emptive/defensive move in saying “if we can’t control it, we don’t want any part of it.”

What Can We Learn from Apple’s Strategy?

On the surface, it’s difficult to glean any shred of insight from Apple’s hands-off social strategy. True, when innovation and premium experience are the hallmarks you want to be known for, then being a chatty Cathy on social media clashes against that brand image. There’s also the aspect of control. When you keep a tightly-run ship, it’s hard for leaks to penetrate. Still, there’s no excuse for sticking your digital head in the sand and hoping no one notices your failures. Perhaps Apple feels better equipped to handle the customer experience in its stores rather than on its screens.

What are your thoughts? I’d love to hear your perspective in the comments!