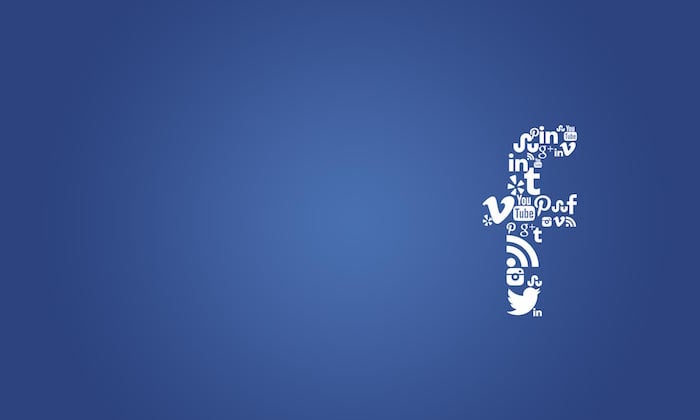 Without a doubt, Facebook is THE PLACE for most businesses to build target audiences and generate revenue.

But, as I’ve covered before, organic reach on the social network isn’t very pleasing. With more businesses joining the social media platform every day, the news feed continues to become more and more competitive.

If you’re starting a page from scratch, you’ll have a hard time building your fan following organically. That’s why you absolutely need to invest in Facebook Ads, in order to stand out in some way on their news feed.

I’ve already written, in great detail, about running and optimizing ads on Facebook. But, once you run an ad, how do you gauge its performance on the social media platform?

In this article, I’ll show you 5 important metrics that you can bank on, for judging the performance of your Facebook ad campaigns.

But first, let me show you 3 metrics that you absolutely should ignore.

The 3 vanity metrics that distract marketers

When asked about the performance of their Facebook campaigns, marketers sputter random metrics. Many of these don’t directly result in the profitability of your campaign.

If you argue that some metrics are a pathway towards improving your overall ad set spend, you’re most likely giving them too much importance.

What do you see, when you first visit a Facebook page?

As a smart social media marketer, hope you don’t merely see the number of fans of the page.

It’s easy to buy likes from Fiverr and generate fake social proof. Many social media marketers give in to the temptation of buying cheap ‘likes,’ after seeing their competitors that have thousands of fans.

But, even though you can add a few hundred or thousands of fans in a day, you’ll screw up your social media engagement.

How do you view a business that has 75,000 fans, but only gets a couple of likes on their updates?

Facebook has taken a strict stance against Likes dealers. It has started sending cease and desist letters to such companies.

What if you earn likes from running Facebook Ads?

If you’re starting from scratch, then they can be important for speeding up the process of building a target audience on the social media platform.

Generally speaking, though, more likes on your posts and more fans as a by-product of running an ad creative campaign won’t matter.

Similarly, the theoretical reach of your ad set only sounds good to hear. It does not indicate how many people engage with your ad creatively, socially or emotionally, which is usually a much smaller total number than your reach. So, don’t shove ‘1,000 people reached’ in your ad reports. It probably would only get you a couple of click-through rates to your website.

Buffer ran ads at $5 and found that, although their reach was over 7k, their click-through rate was only .95%. 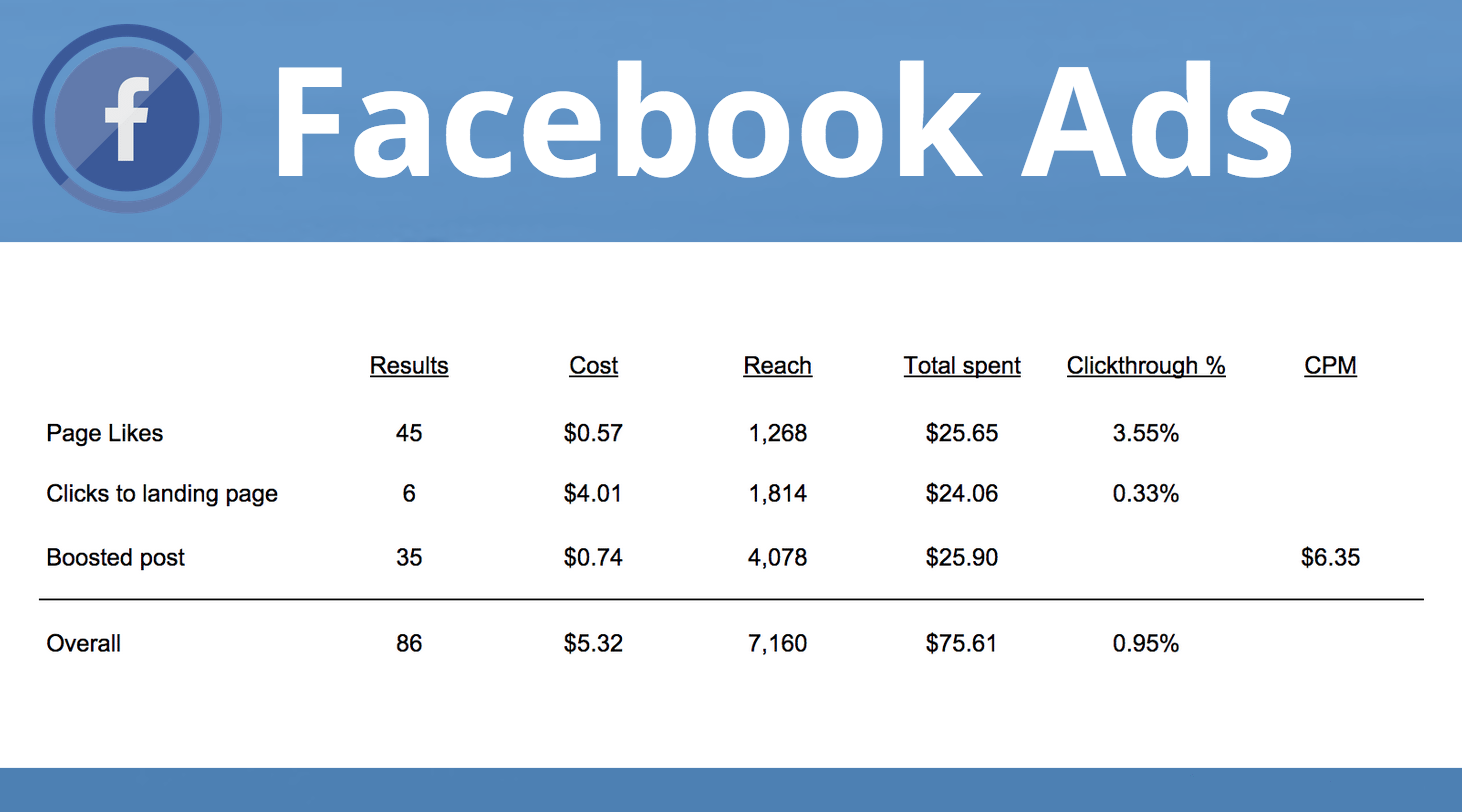 2. Total number of click-through rate and video views on your ad

I don’t think that you should rely on click-through rates, either. Clicks are useless, in many ways.

If you’re running an ad set to generate likes on your Facebook page, then such click-through rates don’t matter at all. And, if you’re driving traffic to your website from Facebook Ads, then you’ll need to specifically rely on ‘link clicks.’

Another metric that people rely on, while running video ads, is video views. But, the problem is that Facebook counts 3 seconds or more as a video view (although they claim to be updating this policy). And, with the autoplay feature in the news feed, it’s a no-brainer that many video views are passively watched without any awareness of your brand.

I know I’ve mentioned that improving your relevance score is a great way to optimize your paid marketing campaigns, as it has a direct relation to your advertising cost.

Want to know how?

Relevance score only tells you the relevance of your ad set to your target audience and demographic. But, it doesn’t judge the quality of your ad creatives and copy.

Alright, now that you’ve got an idea of what you must not focus on, let’s explore the 5 metrics that are worth tracking.

Have you mapped out the journey of a prospect, after someone views your Facebook ad?

If you haven’t, then you might pick a random metric (from the ones above) for evaluating the performance of your campaign.

For this type of campaign, here are the conversion rates that you should measure. They will generally involve making the visitor click on a CTA.

1. Lead generation – The total number of people who sign up for your offer, after clicking on your landing page from Facebook. In the above example of Buffer, a click to the landing page costs a whopping $4.01.

Even if their landing page converts at an above average 10%, imagine the cost of converting a target audience or customer versus their ad spend.

Now, suppose that you’re getting a decent number of link clicks at a low-cost, but the visitors aren’t converting into leads. Then you know that your landing page needs a thorough analysis. See how this metric helps in identifying the leak?

2. Generating sales – If you’re trying to sell your products, then you simply need to measure how many sales you make.

If you aren’t generating your desirable total number, then either increase your budget or go easy on those first-time visitors. Once they are familiar with your brand, you can retarget and cost effectively convert them.

3. Getting traffic to your website – In this case, you simply need to measure the total number of link clicks to your website, after boosting a post. Unless your ad set is outstanding, don’t expect to pay less than 30 cents per click.

Besides measuring conversion rates in specific campaigns, as I demonstrated above:

You can also set up Facebook pixels, as per this implementation guide. This will ensure that Facebook tracks your conversion rates and also optimizes your ad.

If you’ve got an advertising budget of a few dollars per day, then this metric won’t be of much interest to you.

But, if you’re spending hundreds of dollars on Facebook ads every month, then you need to closely monitor the frequency.

As the name suggests, this number tells you the total number of times an ad has been served to an average user.

If you keep showing the same ad set to a person, they’ll get bored. Maybe, they’ll even ignore your ad creatives subconsciously, as banner blindness creeps in.

And, if you end up annoying a user, due to repeated exposure to your ad, then you’ve earned yourself a brand hater for life. AdEspresso found that as soon as the frequency of ads went up, many users left angry comments on the advertised post and even ‘insulted the advertiser.’

You’ll also end up hurting your relevance score, as the annoyed users submit feedback to Facebook suggesting that ‘It’s not interesting.’ 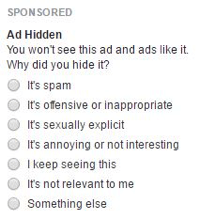 Ekaterina Konovalova shares a specific example, in which a frequency of about 10 brought down the relevance score to 1.

As per an analysis of 500 campaigns by AdEspresso, the average cost per click (CPC) starts to increase with the increase in frequency. And, the CTR starts to decrease. 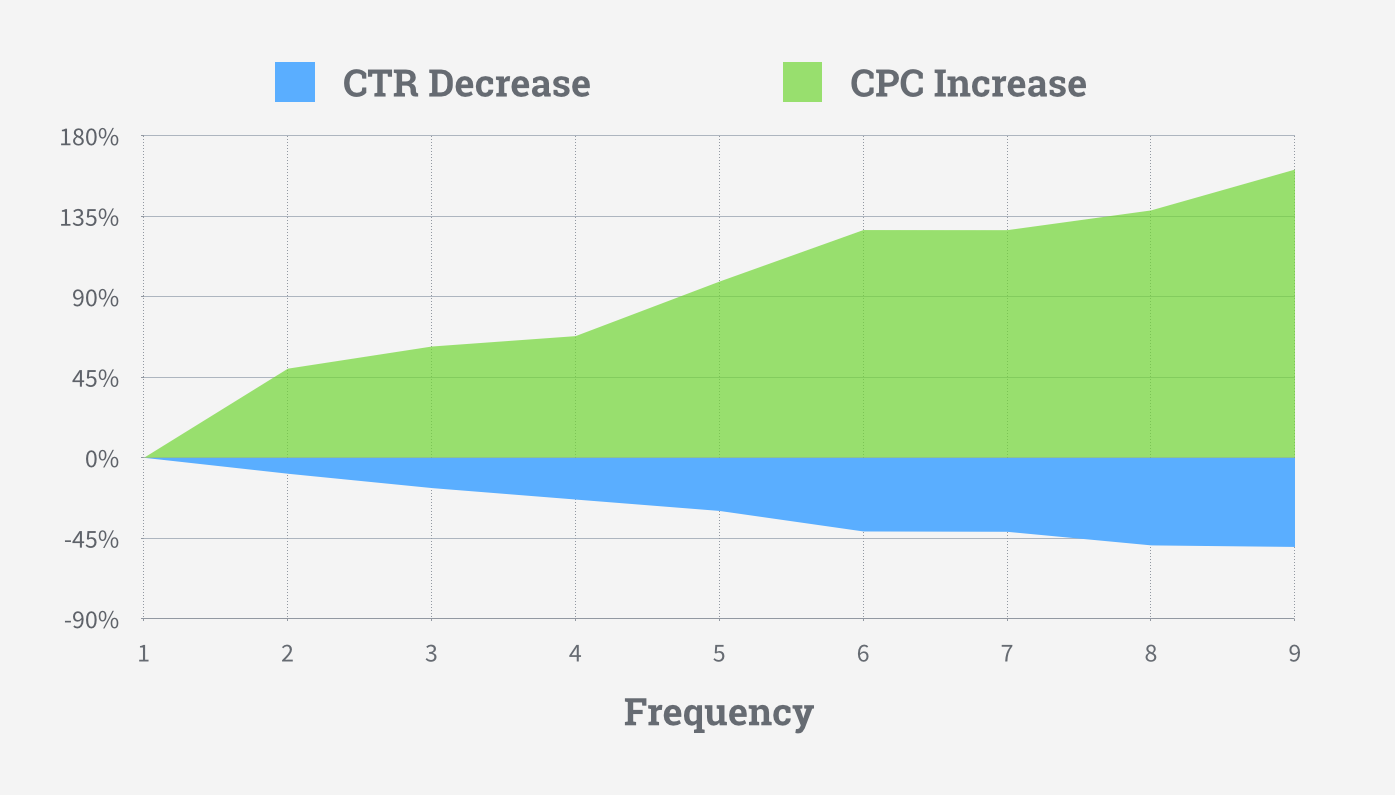 If a user was interested in your ad, then you probably don’t need to show him the same offer 10 times.

So what are your alternatives?

Note: There’s no fixed number that can be said to be the upper-frequency cap. It depends on your product, type of ad campaign and industry. Generally, though, you can expect the target audience to be overwhelmed, after serving an ad 3 to 4 times.

It’s common wisdom that you need to build targeted, high-quality traffic to your website.

Because generating likes and traffic from your ads will give you little, if any revenue. Therefore, in the long run, it can be a challenge to build a sustainable business.

Since you’re paying to get your brand in front of prospects, you need to have information on the money that you’re making to guide future ad strategy. Revenue alone, though, isn’t such a useful metric.

What if you want to evaluate the performance of specific ads? By knowing your most and least effective ad campaigns, you can reallocate your budget to different campaigns appropriately.

But, what if the revenue is less than the ad set spent to acquire the target audience or customer?

Revenue alone isn’t reliable to measure the success of your ad campaigns. You’ll need to use your spend as a benchmark for finding out how well your ads are performing.

If you’ve set up a Facebook tracking pixel, then you’ll get a clear return on investment value on your ad set spend.

Haven’t set up pixels and want help with calculating ROI from your ad set spend?

Then, I recommend you to check out my post on calculating ROI from marketing campaigns.

CPC tells you the cost of an average click from your ad to your website. And, the CTR is the percentage of people that have clicked on your website, after seeing your ad.

If you see a high CPC, then you should check your CTR.

A low CTR indicates that either your ad creatives don’t appeal to your target audience or your ad targeting itself is haywire.

Both of these metrics aren’t super important. But, they are a general indicator of the appeal of your campaigns.

Simply put, an action is a desirable behavior that you expect from your prospect.

The total number of actions alone might not give you any insight. For example, if I want to compare two ads, then I’ll choose the ad creative that generates more actions.

But, is that ad generating more actions more efficiently?

The Cost per Action will give you a more accurate view of your ads. If you can lower your CPA, then you’ll manage more conversion rates and drive higher revenue for the same spend.

I would recommend that you measure the CPA, alongside your ad set spend, frequency and other metrics, for better context.

So, for example, if you’ve got a CPA of 80 cents, then it only tells you that you’re generating an action for that cost. If you view it alongside your spend and frequency, then you’ll see a clearer picture of your most compelling ad set.

In 2016, Facebook ads can be considered one of the most powerful lead generation opportunities for businesses. And, Facebook is only getting more prominent, with each passing day.

When you run your first ad campaign on the social media platform, then it can be overwhelming to scour through the total number of metrics thrown at you. So, most marketers take the easy route and measure vanity metrics that boost their egos. You don’t need to join that bandwagon.

I’ve shown you 5 important metrics that you can focus on for gauging the performance of your ad creative campaigns. Note that individually isolating a metric might not make sense. But, when you view them together, you’ll get good and actionable insight into the health of your ads.

I know these metrics aren’t the only ones that matter. This article didn’t present an exhaustive list.

So I want to hear from you, in the comments below. What are the metrics that you’re relying on for measuring the success of your campaigns?