It has happened to every marketer out there – you are just going about your daily reporting when you log onto Google Analytics and see an unexpected, and noticeable decline in traffic.

First off, don’t panic. I know you may feel betrayed by Google Analytics for delivering the bad news, but don’t shoot the messenger. At that moment, it is your most powerful tool to decode the reasons for the dreaded traffic dip. By combining the features from Google Analytics and Google Webmaster Tools, you can quickly and effectively pinpoint the culprit, or culprits, behind your traffic drop.

Want to diagnose the cause of your traffic drop? Read on and get your web traffic back on track.

Step 1: Look at the Traffic Drop

Okay, you’re probably thinking: “Of course I looked at the traffic drop! That’s how I knew my site had a decline in visitors!”

Yes, but this means you should be thinking critically about the drop by asking yourself these questions:

The two photos below show the difference in a slight fluctuation in traffic and a sharp drop-off.

Taking 10 minutes to really look at your Google Analytics line graph can set you on the right path to identifying the reason behind the drop. For instance, if the drop was sharp, sudden, and isn’t recovering you could be suffering from a Google penalty. However, if the dip only lasts a few days and looks like it’s recovering on its own, your site may have just had connectivity issues that were fixed over a few days.

Once you figure out what types of traffic have dropped, you can begin to troubleshoot the drop. For example, if the majority of your traffic used to be Direct but has now fallen off, it is possible that there has been a change in your usual client landscape. Perhaps a competitor site has just launched a widely publicized campaign and your users are heading to their site.

On the other hand, if most of your traffic has been Organic and now you see a sudden drop, you may have been hit with a Google Penalty. These types of penalties can be devastating to your site traffic and are pretty clear to see if the decline is sudden and significant. You can confirm whether or not you have been hit with a penalty by checking your Google Webmaster Tools account for a penalty notification.

Step 3: Be Aware of New Users vs. Returning Users

It is just as important to know who your users are, as to where they are coming from.

Depending on which type of user has declined, you can isolate certain reasons for the traffic drop.

For instance, if new user numbers have taken a hit there could be an issue with how users are searching for your site, or how it is appearing on Google. This may mean it’s time to do some new keyword research or it could indicate a Google penalty.

However, if returning users have declined it could indicate an issue with your site structure and ease of use for your users. Maybe the site is reporting multiple 404 Not Found errors or the loading speed of your site is too slow, so users are leaving due to a poor experience.

It’s vital to look at the big picture when it comes to traffic drops. Head over to your date range and really zoom out. Look at the past six months, or year even, to see if a traffic drop had occurred during a similar time in the past. You can compare time periods using the compare tool in the Google Analytics calendar, which lets you look at previous weeks, months, or similar time points in the past year in cases of seasonality. This allows you to see any trends or notable differences in user behavior or traffic sources. 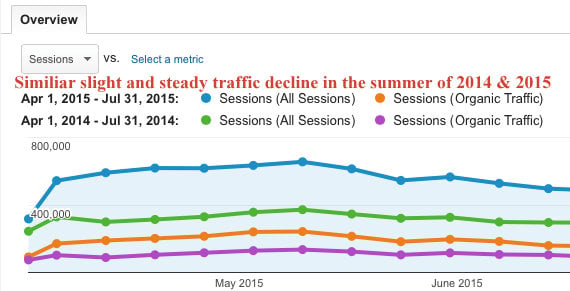 One client of mine happened to see a steady traffic drop between May and July of this past year. They were extremely concerned as to why their faithful returning users were suddenly not visiting their site. I began to investigate by isolating the decline to direct traffic and returning users, but I still couldn’t pinpoint the exact reason behind the drop.

However, once I zoomed out, I saw that this same traffic drop always occurred during the summer months, and recovered by the end of September. We were then able to conclude that the drop was due to regular seasonality, which made perfect sense since their product was an educational tool. 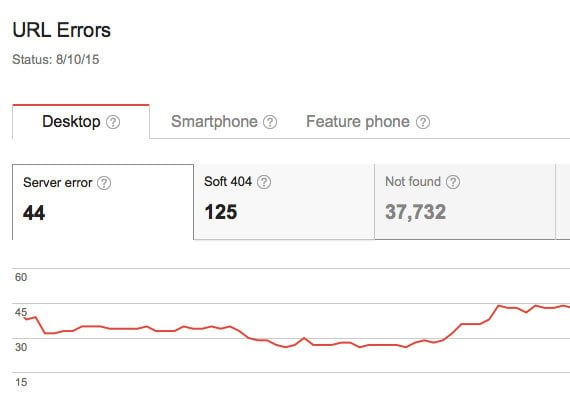 You should make it a habit to check on both your Crawl Errors and HTML errors. Both of these reports notate the number of internal errors your website may have. If your site is reporting a hefty amount of errors, it could be impacting the user experience. This could cause new users to be deterred from your site (since it seems unreliable or hard to use) and could drive even faithful users to competitor sites.

Traffic drops are never fun and, if left unaddressed, they can be extremely damaging to your business. However, with the right tools and a systematic approach to uncovering the reasons behind a drop, you can survive any dip in traffic. So, next time you see the dreaded decline in traffic, reach into your survival kit, use Google Analytics as your weapon, and restore your site to glory.

About the Author: Brittany Pennellatore is a digital marketing analyst at Fire&Spark. She manages outreach, web analytics, and social media projects for clients in the tech space. You can reach out to her on Twitter.