Can Shock and Awe Copywriting Transform Your Marketing?

Blog / Can Shock and Awe Copywriting Transform Your Marketing?

Many areas outside the web are very good at capturing audiences with great headlines and attention grabbing copy. Frequently, this is done in show business. To promote a show like Dr. Oz, marketers will use words such as “shocking, new fat-loss secret revealed.” As the promotion is running, it will pan over faces of people in an audience looking surprised.

There is something to be learned from these great copywriters. In this post, we’ll be breaking down how writing attention grabbing copy can improve your marketing campaigns.

Let’s Start With An Example

On the web, there are dozens of things on each page competing for your attention. The world is at your fingertips. Because of this, it can be difficult to focus on one thing. Unfortunately, most websites don’t help the user focus. They include dozens of attention grabbing headlines or distracting ads that always try to get the reader to check out other content.

We would normally consider this poor web design. However, there is a thing or two we can learn from these distractions.

For example, here’s a zoomed out page on Huffington Post: There are two ads to the right of the story; and underneath the ads, there is the “Most Popular” section, where there are these enticing headlines:

“LOOK: Brides Reveal What They Would Have Done Differently”

“LOOK: This Is Your Body on Stress”

“A Bikini Wax Could Lead to This?”

“The Number of Deaths Associated With Sugary Drink Consumption”

“11 Things That Will Change As More Women Stay Single”

“The Big Lesson Every Married Couple Needs to Learn”

“A Letter to My Son about Stopping Rape”

And this is just one section! There also are ads on the same page: There’s even a slideshow to view: Compare this to newspapers, which contain only about 2-3 stories per page and a couple of ads. Given this adjustment to the digital era, is it any wonder humans are losing their ability to focus? Content creators and advertisers are similar to basketball fans yelling at a player preparing to shoot a free throw. They’re trying to distract the player and break his or her concentration.

The same happens nearly every day to anyone on the web. It’s not enough to have links to stories and advertisements on every page. Now they work to make each story and advertisement sound as interesting as possible.

If you spend an hour surfing on the web, you’ll likely come across really catchy headlines. As you know, it can come from ads: The top two ads are an “alarmist” type of advertisement. They are meant to put people on edge and bait them into clicking and reading an article, which likely will lead to an offer to buy a product. The bottom left ad promotes intrigue while the bottom right ad gets the reader’s attention with the picture and text “We can’t help but stare”. All four of these ads promote fascination and curiosity. You may see these ads around the web with different images attached to the same title, like this:

Marketers always are testing to see which image gets the most attention.

This ad was seen on ESPN.com, which is mostly viewed by males: It features a muscular man to pull attention away from the content on ESPN to the ad.

Since they assume men want to build muscle, they use the words “Boston scientists have discovered a revolutionary muscle builder. Try this one weird trick and build muscle.”

The wording in this ad is fantastic:

If a male is interested in building muscle, this will further advance his interest. It now gets targeted. It’s beyond just “Boston scientists have discovered…” Now the ad is getting specific.

“Try this one weird trick…”

A weird trick? That’s all it is?

It sounds amazing that a “weird trick” will help you build muscle. I gotta click on this ad to see what they’re offering. “But Zach – are you telling us to become tabloid copywriters?”

Definitely not. But the examples above do get people to click. So what can we learn from their style?

What Marketers Can Learn

Writing attention grabbing copy is all about exaggeration and sensationalism. Make something, no matter how insignificant, seem Earth shattering and so attractive a person won’t want to miss it. But marketers need to be careful when learning from this. Making something sound over the top may be perceived as a scam.

When it comes to marketing, take a page from the these copywriters. Make things exciting and don’t reveal everything in the headline. In an ad, if you’re used to describing what your product does, try just getting people energized about it. Spark their interest so that they want to see what the product is about.

For instance, let’s say your product ads usually say “Our product does __, __, __, and __, buy today for $499!” Plan instead to give fewer details and just get people inspired about the product. Here is an example from Salesforce:

If this ad is placed in a website read by C-Level executives, they may be intrigued. They don’t know all the details, but there’s a big “Learn how” button to check it out. Increasing sales by 30% was just the bait to impress the reader.

GoDaddy is an example of a company that tries to bait people to their website. At the end of this video, they aim to get people to the GoDaddy website: 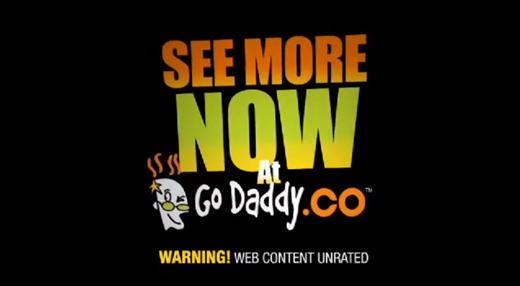 In the GoDaddy ads, they don’t mention anything about their unique value or even much about their business. They just get their name out, bring people to their website, and try to get them to become customers. Now, when people think about buying a domain name, GoDaddy is one of the first names they think of – despite GoDaddy originally being a supporter of Stop Online Piracy Act (SOPA) before backing down from customer outrage.

Interestingly, Namecheap took advantage of the outrage over GoDaddy by donating $2 to the Electronic Frontier Foundation for every new domain transfer. It proved to be a good business move, as Namecheap had over 32,000 domain transfers.

Digg was one platform where Dropbox was launched. Co-Founder Drew Houston submitted his product to Digg, hoping to get a few upvotes. Admittedly, he had a good headline:

It’s pretty daring to call something a “Google Drive killer” – especially when it comes from a startup. It shows Dropbox has confidence in its product. Dropbox has turned out to be a success.

On the other end of the spectrum, Jason Calacanis created tech journalism site, Launch. The original idea seemed to have changed, but when Calacanis began, he called it a “TechCrunch-killer.” This was Calacanis’s way of bringing attention to his new site. But when things don’t work out, it can be devastating. Whether it works out or not, it definitely was daring of Calacanis to call his tech journalism startup the “killer” of TechCrunch, which is one of the most prominent tech outlets.

However, I should warn you that I believe launching your product and calling it “the __ killer” is not just bad strategy, but also a terrible idea. It can lead to embarrassment and humiliation. Don’t establish your brand by comparing it to a competitor.

When Steve Jobs returned to Apple, he made it clear that their goal was not to beat Microsoft. Encouraging employees to think they need to beat another company will lead to distractions. Employees constantly will be checking to see where competitors are. It can be bad for morale. When Apple passed Microsoft in market cap, it was just another day at Apple, according to Jobs. No one even noticed.

Many advertisers are into making people tense. Show people a little information that they may not have heard yet and get them so riled up that they have to click the link or advertisement. Here are some examples:

We’ve all seen the Samsung ads for Galaxy S3.

It taps into the anti-Apple passion and gives them a voice. They highlight that Apple supposedly:

Here’s a magazine advertisement from Samsung. They highlight the vast number of features their S3 phone has when compared to iPhone: These ads get people talking. It’s not the typical advertisement filled with numbers and promotions.

So next time you’re thinking about advertising, think about whether it would be wise to get people tense. Some do this by attacking other companies (like Samsung) by saying “___ is ripping you off!” Others do it by organizing a movement against traditional practices. This can be seen with People for the Ethical Treatment of Animals (PETA) and factory farming or World Wildlife Fund (WWF) and animal rights activists.

Will making people tense be good for your business? Think about it before you immediately dismiss it or accept it.

Sometimes headlines will ask people questions to promote shock in the reader. A few examples: 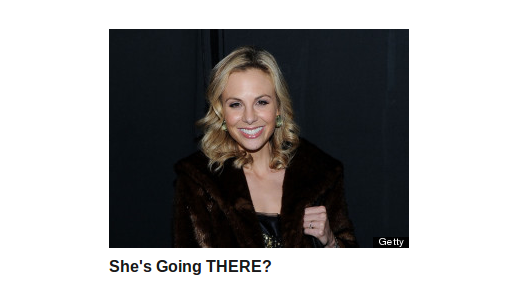 This headline doesn’t ask a question, but the picture makes readers ask themselves “who is that?” When companies compete on price point, they’ll often ask in their advertisements:

“What will you do with all the savings?”

The key lesson to learn from great copywriters is how very good they are at acting on people’s core beliefs. When people see attention grabbing copy, it grabs their attention right away and they quickly click. It sparks excitement and curiosity. They don’t “hover over” the link or advertisement. They see it, it draws their attention, and they click. It’s all about getting a reaction out of people, and at its core, advertising has the same purpose.

Anything you would like to add about writing headlines and how it intersects with marketing? Let me know in the comments!