If I asked you to name one of the most innovative and ingenious technology companies of the last ten years, chances are, Apple would be one of the first to come to mind. No one can argue with the power that Apple has to sway millions of people into standing in line for hours in the bitter cold just to buy a phone.

And the fact that continues to astonish people is that Apple wasn’t the first to come up with these products. They didn’t design the first MP3 player, the first tablet, or the first smart phone. And yet Apple, along with rival technology companies like Google, Blackberry and Microsoft has access to the same materials, the same bright minds, and the same funding. What’s the difference? Why are more people buying iPods instead of Zunes, or iPhones instead of Blackberries?

Let’s think of an onion for a moment

Apple’s marketing, at its “core”, is more like an onion. Separate, individual layers that all come together to create the whole picture. At every stage of a product’s development or marketing, there’s input, evaluation and ideas. Don’t think of Apple as having a single “marketing department” that controls all its advertising and design, rather, the whole company, and its customers, are the marketing department.

If you needed an example of a Purple Cow, referencing Seth Godin’s book of the same name, you’d have to look no farther than Apple. Everything from their packaging to their intuitive product design – even their address (1 Infinite Loop) comes around full circle to demonstrate a company that’s on the cutting edge of their industry.

Those people standing outside for hours on end waiting to be the first to get their hands on the iPad 2? They don’t just do it for Apple. They do it because it makes a statement about them as an individual. And Apple’s marketing feeds that first impression. Apple subconsciously rallies people around a common “cause” by using a combination of social, marketing and psychological tactics.

How has Apple had such a fierce following for so many decades?

You could go so far as to call it a cult. Apple’s marketing has embraced the powers of scarcity and social proof. And that power goes all the way back to 1984’s https://www.youtube.com/watch?v=qp0HIF3SfI4 commercial. It spoke to an entire generation: throw off your shackles. Break the status quo. Think different.

The commercial forced people out of their comfort zone and brought to light an alternative that caused them to question their technology-buying decisions. It wasn’t just about buying a computer. It was about buying into a mind-set.

But this article isn’t just to rah-rah about Apple’s marketing prowess. It’s about showing you that you, too, can build a marketing vehicle that’s fueled on intelligence, innovation and inventiveness. You, too, can create fanatics out of followers – a cult if you will. Here’s how.

Step 1: Communicate from the Inside Out

So, as a business owner, how do you reach the early adopters? And how do you make sure that they’ll spread the word to the majority? TED speaker Simon Sinek discovered that Apple’s marketing, as well as the influence of countless other revolutionaries and inventors, from Martin Luther King to the Wright Brothers, followed a different communicative process than what we’re used to hearing.

Sinek was able to demonstrate that even without the bottomless pockets, the network of people, or the sheer brilliance of the greatest minds money can buy, the people and companies that became household names did so by reversing the way they share their message with others. He calls it “The Golden Circle”, and shows that most marketing messages – even from the most well-known (and well-funded) companies, go something like this:

Sinek’s main message is: very few organizations know why they do what they do. Why does the organization exist? Why should the CEO get out of bed in the morning? But until an organization identifies it’s central belief and message, they will most likely continue to communicate in a mediocre way.

Let’s break this concept down into a couple examples:

The Old Marketing Method (used by a hypothetical car company) 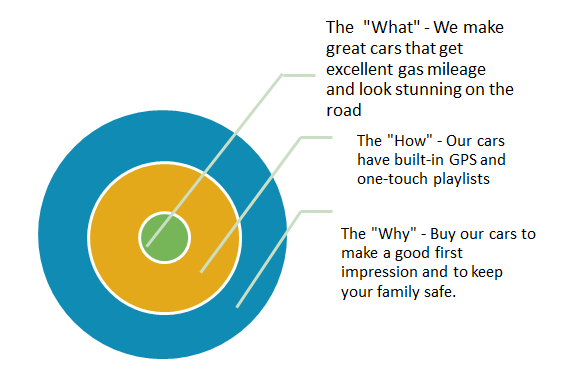 Your typical marketing process used by most companies. Notice the marketing message starts with “What” and ends with “Why. 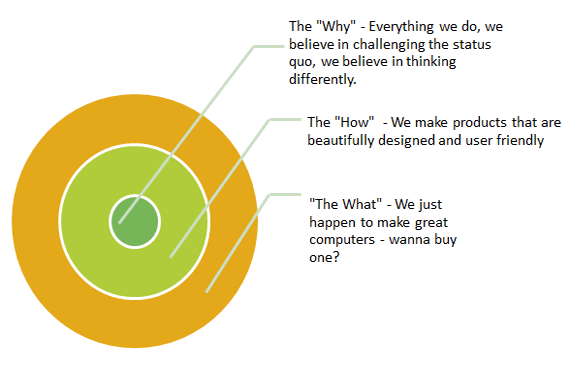 The Golden Circle marketing process used by Apple, The Wright Brothers and Martin Luther King. The marketing message starts with “Why”: the central belief of why the organization or movement exists.

The development of such a powerful core belief system is what attracts the cult following. Once Apple was able to establish this powerful central message, they were able to sell more than just computers.

Just being innovative and unique isn’t a guarantee you’ll be successful. You also have to have enough reach to cross over the tipping point that combines “Early Adopters” with the “Early Majority”. This is known as the Law of Diffusion of Innovation, and it permeates every technology product launch from release to retirement.

Apple has made it their mission to enchant the Technology Enthusiasts and Visionaries, who can then act as banner-carriers to the rest of the market. They do this on every possible front – from personalized engravings on your iPhone to equipping elementary schools with iPads.

You can probably think of many innovative products that have fallen through the “chasm” because they failed to generate enough “early majority” steam.

If you’re as passionate about technology as Apple, and you want to give the impression that you’re on top of the latest-and-greatest innovations, Apple makes it abundantly clear that no other product will do. And that idea spreads from early adopters and trendsetters – to the rest of us.

Step 3: Be Different and Simultaneously Understand the needs of your Customers

This isn’t to say that Apple didn’t encounter resistance – and that you won’t either. In fact, until the last decade, owning an Apple product was more of a hindrance than a genuine statement of tech-savvy. Coders especially wouldn’t touch it. If you wanted to show that you went “against the grain” of society, you put together a rig with some obscure flavor of Linux on it. Today, you’ll find plenty of programmers embracing the Mac.

According to Guy Kawasaki, in his excellent book Enchantment, the reason the early Macs failed to catch on in a PC-dominated industry was because Mac developers and engineers thought they knew what people wanted…and so created computers that were creative and easy to use, but flat-lined in terms of computer power and business-friendly features.

Apple’s real surge toward prominence (some would even go so far as to say dominance) of the electronics market happened in the late 1990s, with the emergence of the iMac. Rather than the stale, boring grey or beige, iMacs came in several bright, eye-catching colors.

Plus, the iMac’s biggest selling point was how easy it was to get onto the internet. Just plug in your phone line and go. That feature alone made it very enticing to new internet users.

Fast-forward a decade. To encourage people to buy an iPod instead of your average, run-of-the-mill mp3 player, Apple had to completely reinvent the way we look at music files. The original iPod was designed to hold around 5 GB or 1,000 songs – far more than any other mp3 player at the time. Later, with the release of the iTunes store, people could suddenly download just the songs they wanted for a much smaller fee than buying the entire CD.

But what really clenched the iPod as a hit seller wasn’t its music-storage capabilities. It was the fact that (a couple releases later), you could connect it to a PC. All you had to do was download iTunes. This meant millions of PC users could now organize and listen to their music without the need for a Mac. And for many of us, this was our first introduction to an Apple product in a long time. And we loved it so much that we spread the word.

The takeaway lesson to remember from the Mac’s sudden surge in popularity and the iPod’s success is this: the more creative, interesting and influential your idea, the harder it is to convince people to adopt it and make it their own. The solution is to discover what people truly want (and not what you think they want) and determine if they’d be willing to change and experience your idea in order to get that want fulfilled.

Step 4: Make it Easy for People to Change

Sometimes, people simply won’t budge – even (and especially) if what you’re offering is substantially better than the competition. Change is hard. It’s unpredictable. Sometimes it hurts. In order to convince them to try your solution, the same way that Apple and many other top companies do, make it as easy as possible for them to take that first step. Consider the following questions:

The message to grasp from Apple’s marketing is to clearly focus on your own “Why” – first. Before you get into the “How” and the “What” of what you do. Concentrate on your purpose to extend your reach to people who believe just as fervently as you do. Those that don’t aren’t looking to buy from you anyway – and that’s okay, because they’re not the kind of people you serve.

Apple has a brand base who believes, almost to the point of zealotry, in their products. And they speak to this base in everything they do, from the Mac vs. PC advertisements to product design and features. It’s not blatant boasting – it’s an unwavering belief in their products. As Sinek says – “People don’t buy what you do, they buy why you do it.”

Once people are convinced that why you do what you do is worth it, making believers out of them should be as quick, friendly and painless as possible.

And it’s not just a marketing strategy. As it turns out, our brains are hard-wired for this kind of response IF (and only if), it meshes with our belief system too. If it doesn’t, you might say “It just didn’t speak to me…” or “It just didn’t feel right”. If the marketing message does speak to you, you’ll find yourself subconsciously nodding your head as you look over all the features and benefits meant to bolster your decision.

A Force to be Reckoned With

Like them or hate them, Apple’s marketing is a force to be reckoned with – and something that has yet to truly be duplicated by other major technology companies. What are your thoughts on their message and how you could apply it to your own business? Can you rally your customers to follow your beliefs and ideas? Or is it just a bunch of marketing smoke and mirrors? Post your thoughts below in the comments!