How Pandora Uses Data to Improve Its Service and Music Stations

When it comes to discovering music you’ll love, few companies do it better than Pandora. From the core of its Music Genome Project, which studies over 450 different musical attributes to find songs according to each listener’s unique tastes, to its Thumbprint Radio, which creates a station based on other songs you’ve liked, Pandora leverages its data to the fullest.

But how does it do it, and what are the end results? Here’s what we learned about how Pandora uses Big Data to keep your playlist pumping.

The Convergence of Science and Music

The beating heart of Pandora — its Music Genome Project — was originally a commercial failure. The idea was to have musicians listen to and decode a song’s “DNA” and then categorize it according to different musical qualities such as meter and tonality. Numbers are assigned to the over 450 different attributes, and Pandora’s algorithm went to work, finding other songs that match these same qualities. 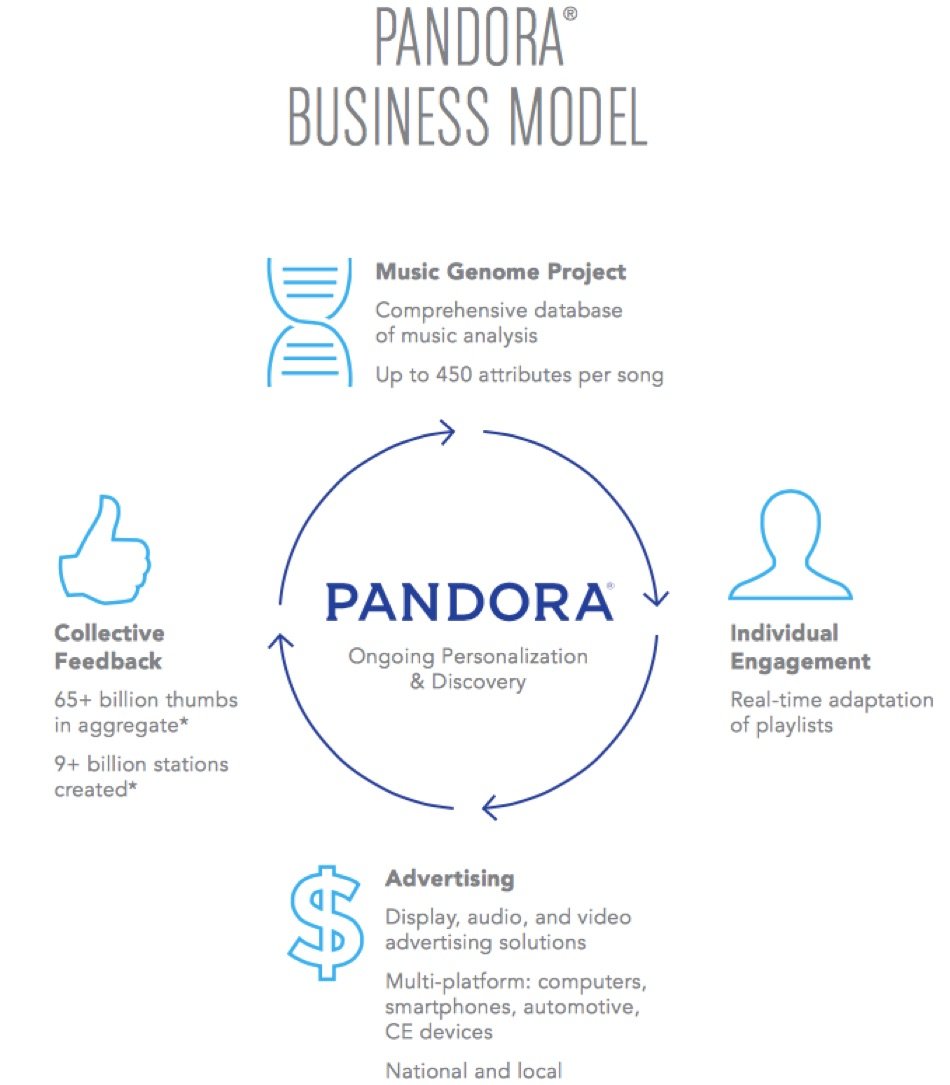 Originally, the plan was to license the Music Genome Project commercially, but when that was met with a tepid response, Pandora itself was founded – creating the foundation for the music streaming service we all know and love.

But that’s not even scratching the surface. According to Pandora’s Chief Scientist and VP of Playlists (yes, that’s his real title), Eric Bieschke, notes that the context of how, where and on what device the user listens to music are also part of discovering their tastes.

Because Pandora is available on everything from car stereos to mobile phones, the music people choose to listen to at different times of the day and on different devices can be radically different from each other. Bieschke explains that what you listen to in the morning at the gym through your mobile device can be markedly different than listening to music in the evenings when winding down after a long day. It’s Pandora’s job to incorporate things like the time of day to a user’s listening preferences and ensure that the next song on the playlist is one they’ll love.

Pandora’s algorithms also weigh different factors according to the actions the user takes (or if they take no action at all) when listening. The rarest and most valuable insights come in the form of a “thumbs up/thumbs down”. This simple action has an immediate effect on the next song you hear.

Simply skipping a song, Bieschke explains, doesn’t carry as much weight with the algorithm, since the intent behind the skip could be anything from “I’ve heard this before” to “I’m not in the mood for this right now.” However, if you don’t skip songs regularly and then start to do so considerably, Pandora takes note of this and adapts your playlist accordingly.

A Deeper Look Behind the Scenes

Pandora’s first data scientist, Gordon Rios, spends a great deal of his time understanding the intricacies of machine learning and music recommendations. One of the biggest reasons Pandora has remained so popular (especially considering the looming spectre of rivals like Spotify) is rooted in its simplicity.

But according to Rios, there’s a definite trade-off. Ease of use can affect the complexity of the data and how sophisticated the data collection methods are. Fortunately, Pandora has several years’ worth of listening preferences and attributes for every listener cataloged and analyzed. Its recommendations are pivotal to its success, so a great deal of time and effort are poured into making those recommendations the best they can be.

It’s worth noting that Pandora has collected over 65 billion “thumbs” — a major indicator in how it matches musical tastes with listeners. And although Pandora faces some serious competition from other streaming services, like Apple Music, Spotify, and Slacker, their team believes that trying to correlate music tastes purely with which songs or albums a user bought (like iTunes does) is too short-sighted.

The truth is, purchase data alone can only do so much. There’s a distinct division between the music people buy and the music people want to listen to at any given moment. Pandora makes allowances for the first and wholly embraces the second.

Your Musical Tastes are “All Thumbs”

But like most people, your preferences may vary wildly. You might love some pumping electronic mixes in the morning, but prefer classical at night. The last thing Thumbprint Radio wants to do is jar you with a techno beat one minute, and Beethoven the next. So new personal recommendations and algorithms had to be developed in order to capitalize on these preferences.

Many tests were done and different prototypes were unveiled to listeners. One of the algorithms was a “walk” through different songs based on random thumbed-up tracks from all of your stations. The issue with this first option was that there was little change to the station’s overall qualities. So if you predominantly liked blues-type music, the station would get “stuck” on blues.

The second algorithm tried to bundle stations according to different attributes, and then randomly walk through “clusters” of them. This was a more ideal option since the developers could clearly map out divisions between things like blues and jazz.

But this algorithm came with its own set of problems — namely, if the listener generally likes blues, how much do they also like jazz? With this algorithm, there’s no way to know precisely, so again, Pandora has to continue collecting data in order to make more confident adjustments and course corrections.

Bet you didn’t think so much thought (and data) went into the music you listen to, did you?

Data is the Foundation of Pandora

In his 2016 Letter to Shareholders, Pandora founder and CEO Tim Westergren wrote about the importance of data collection and analysis:

Data is the foundation for virtually every part of our business. From the playlist personalization engine to the ad targeting capability, we have turned even more to data science. Every year brings billions of more listening hours with the associated additional preference information, adding more and more precision to our song-selection. We will leverage this data as we enter into new business lines such as on-demand subscription services, live events and more.

Each competitive advantage — personalization, effortless discovery, monetization, scale and data — is driving the growth of our core business and supporting our expansion into new markets.

What’s Good for Listeners is Good for Advertisers

All of this talk of musical tastes and preferences is all well and good for the listener — but when you listen to Pandora, you may not know that Pandora listens back. Building on its years of data collection and 55.9 million of active monthly listeners, the company has begun to data mine these preferences to determine what kinds of ads are most likely to engage them. Think advertising and music tastes have little in common? Think again.

Eric Bieschke notes, “Consider someone who’s in an adventurous musical mood on a weekend afternoon…[o]ur hypothesis is that this listener may be more likely to click on an ad for, say adventure travel in Costa Rica than a person in an office on a Monday morning listening to familiar tunes. And that person in the office may be more inclined to respond to a more conservative travel ad for a restaurant and museum tour of Paris.”

At its core, it’s behavioral targeting — with an added layer of musical complexity thrown into the mix. Pandora is not the first company to tie a user’s preferences to potential purchases. Netflix is also well-known for mining a user’s movie preferences to suggest new flicks, and Amazon looks at the broad spectrum of your purchases to infer quite a bit about you.

But Pandora goes much deeper. Vitaly Shmatikov, an associate professor of computer science at the University of Texas (Austin), who studies computer security and privacy, believes that our music choices could lend themselves to predicting our individual worldviews with a high degree of accuracy.

Pandora even has a political ad-targeting system that it uses for presidential and congressional campaigns. And although they don’t look at ad users’ individual attitudes toward certain pivotal political issues, their system does run ads for different candidates based on the stations and artists you tend to like. And because Pandora asks for your ZIP code when you register, they can further tailor political ads to specific districts.

When you tie all of these things together, you end up with a very robust, data-driven system that’s built on perhaps the most unique data collected of all — not your buying or watching habits, but your listening habits. Pandora has already deduced quite a bit about you based on the music you love. Who knows what they’ll be able to discover about us as they continue to grow?

What are your thoughts on how Pandora uses big data? Do you find its stations are accurate for your tastes or do you think there’s still work to be done? Share your thoughts with us in the comments below!