Blog / Social Media / Should You Delete Your Business Facebook Page?

A business Facebook page is considered one of the must-haves of online marketing. Why in the world would someone not have a Facebook page?

But recently, some businesses have been doing something that seems strange — even suicidal. 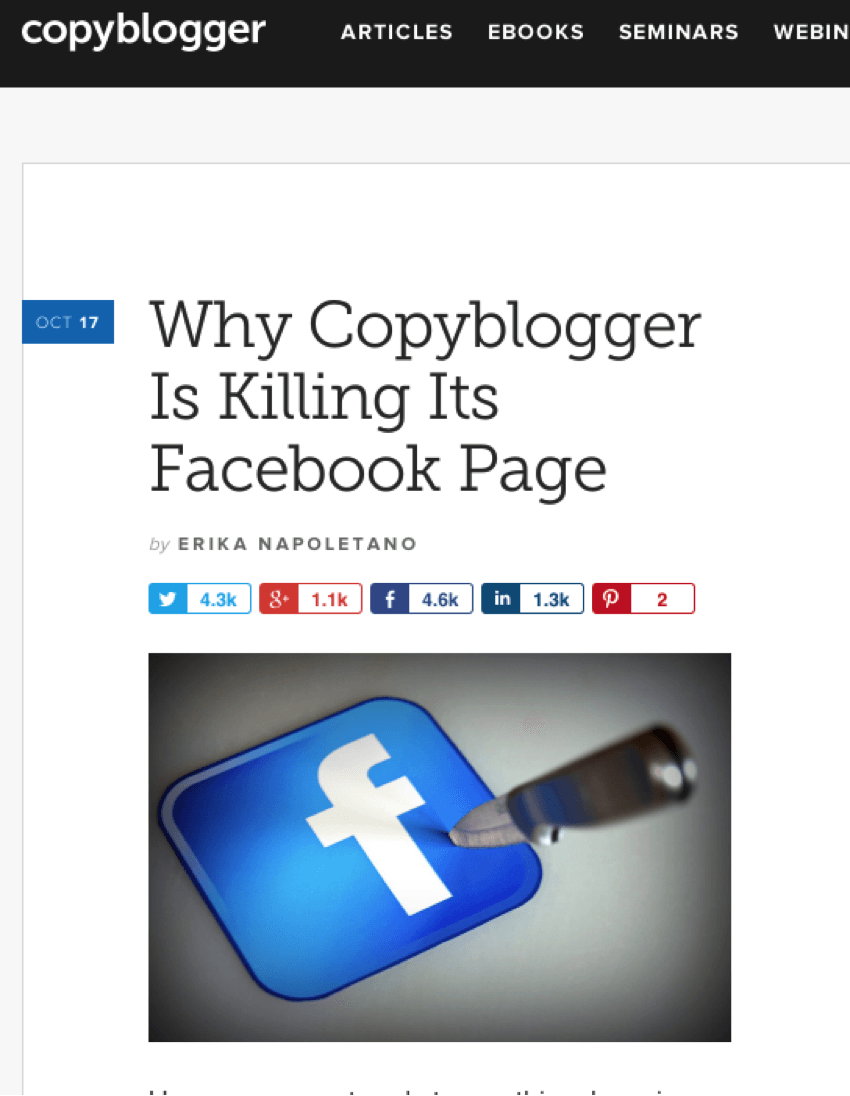 So, one of the biggest copywriting websites in the universe pulls the plug on Facebook.

And so the advice rolls on… There’s a growing number of individuals and companies saying no to Facebook.

What’s driving the trend to break up with Facebook?

Let me give you the full laundry list of reasons why people have decided to ax their Facebook fan pages.

First, a couple things to remember before I show you the list:

These are how marketers explain their decision to leave Facebook:

Did I miss anything?

I can tell you’re worried

I know what you’re feeling. This is making you very uneasy. If all these web professionals and high-profile publications are advising against Facebook, then maybe you should get off Facebook too.

As with any issue, you can argue both sides of the equation as long as you want. There are always going to be pros. There will always be cons.

A few loud and cantankerous voices should not drown out reality. Facebook is still a force to be reckoned with. Rather than argue against all the reasons above, point-by-point (which would be pointless), let me suggest a few reasons why you should go ahead and hang on to your Facebook page:

You see conversions or at least traffic

Is Facebook driving conversions and positive engagement? Stick with it. Why would you want to shut off a source of potential revenue?

You’re probably getting some benefit.

Maybe Facebook isn’t fulfilling your dreams of awesomeness. Maybe you’re not racking up viral exposure and thousands of fans.

So what? Just because you’re not achieving what you want doesn’t mean that you’re not accomplishing anything. Facebook may still have some value.

Because Facebook is the largest social network, some people automatically assume that they should be able to have a larger-than-average ROI. But that’s not necessarily true. The ROI from Facebook may be limited, but still legitimate.

If you see the benefit, don’t throw in the towel just yet.

You’ve been on it for more than six months, and people are liking, commenting, and visiting

One of the most dangerous things that people do in online marketing is quitting something after only a few months of effort.

Hold on right there.

If you’re getting any traction, that’s a good sign. Now I could understand if you’ve been on Facebook for years, and people are simply not doing anything. There’s no commenting. No likes. No action. No nothing.

But give it a few months…at least six. Be active for a while, and see what happens.

It’s a great place for your audience.

The great thing about social media marketing is that you’ve got options. Of course, that could be the downside as well. (Too many options!)

When you line up your social media marketing channels for comparison, keep in mind that its apples and oranges. “Which is better, Facebook or Twitter?” is not a legitimate question. It’s like asking, “Which is better, a refrigerator or a golf club?” Both have handles! But they have different purposes.

What you must understand is this: Your audience is social. They may be social in different places and for different purposes, but they are still social. Your role is to figure out where they interact best and most intentionally with your brand.

Here’s why. If you like Facebook, then you’re more likely to stick with it. If you hated Twitter, by contrast, then you’d probably get frustrated and quit after a few months. Plus, if you have positive experiences on a given social network, then you probably have a good intuitive sense of how to best interact on that network. You’ll feel more enjoyable towards the experience and towards fans, and your marketing efforts may be moderately successful.

All those benefits, just because you enjoy it. I would rather have you enjoy doing some marketing that has limited benefit than to do something that you hated and quit. Something is better than nothing. Enjoyment is better than misery.

So, let me provide you with a definitive answer to the question. Should you delete your business Facebook page?

In spite of the naysayers, haters, and embittered marketers, I suggest that you stay on Facebook. The fact is, there are people there — a lot of people. This is your audience. These are your customers.

Facebook is just one of many platforms that you have for reaching your audience. And yes, it’s one of the biggest. You’ll have to make your own decision, though. Look at it from a business perspective, not just through an emotional lens.

If so, then don’t leave. Most businesses are best off staying put on the world’s largest social platform.

What do you think? Is it smart for a business to delete its Facebook page?