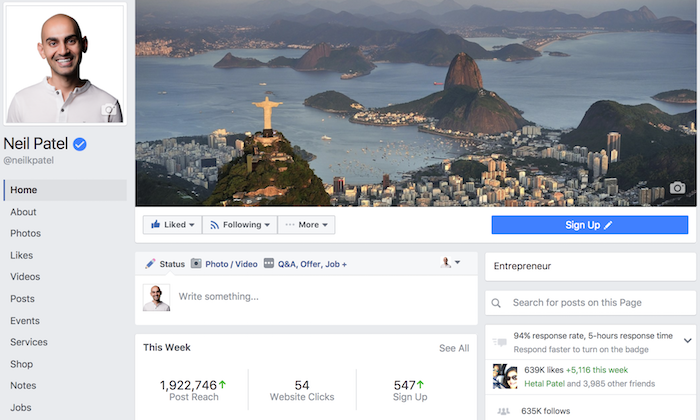 If you look at my Facebook fan page growth, you’ll see that I’m trying to build as many fans as possible.

What am I doing to get these fans?

I’m spending money to buy fans. A lot of money.

On average, I’ve spent $12,512 a day over the last month. Here’s the tally from Ad Manager for this week.

Am I overpaying for fans? Yes!

My campaigns might not be fully optimized, but I don’t care.

Why? What’s my play here? It’s not about getting fans at the cheapest rate. Right now, it’s a race to see who can get the most eyeballs the quickest. Later on, I’ll figure out what to do with the eyeballs.

Here’s the thing about Facebook that a lot of marketers complain about. If you post a story from your fan page, your fans won’t see it.

Perhaps you’ve heard about Reachpocalypse. Perhaps you believe, like many people do, that Facebook has destroyed your chance of ever having an engaged and excited fan page again.

I don’t buy it. In fact, I gladly hand wads of money, every day, to Mark Zuckerberg, because I’m getting value in return (more on that in a minute).

Here’s what I’ve learned. If you have content that is flat-out, ridiculously good, your fan base will see it. They will love it. You will win.

Sometimes, I’ll try boosting an article to my fan page, but the results aren’t usually that great. This tells me that my fans have already seen the content and engaged with it. They aren’t likely to engage again. As you can see from the screenshot above, I spent $500 boosting that post. Most of the engagement by far was organic and the paid efforts didn’t yield much in the way of results.

The lesson I’ve learned is that posting great content will give you a great engagement rate. The real reason Facebook doesn’t show more of your fans your content isn’t necessarily about how greedy Facebook is. It’s not about how uninterested your fans are. It’s about how boring your content is.

So, I’m spending a lot of money on Facebook fans. Is the ROI worth it?

But, the traffic to my website, NeilPatel.com, from Facebook is nearly 240,000 visitors a month! This isn’t traffic from ads. This is traffic from my fan page and other shared content of mine across Facebook.

In addition, I’m getting a lot of text messages from random people that I don’t know. I’m also receiving a ton of missed calls throughout the day from people that I don’t know.

Here’s why it’s worth it:  Brand awareness.

So the ROI isn’t there. Yet, I’m still pouring tens of thousands of dollars a week into my Facebook fans.

Look, random people are finding my number and calling me, sending me Whatsapp messages and texts. People stop me at events or airports and want me to grow their business using digital marketing. Complete strangers are asking me to work with them or provide consulting.

Somehow, something is working.

But, it goes beyond the numbers of visitors and random texts. It’s about the way that my Facebook presence is impacting individual lives.

A young lady told me last week, “Neil, I saw a post of yours on Facebook and read your article about having no car. It was really an inspiration! I’ve sold my Volvo last week. It’s weird, but now I have more energy, more time, less clutter and am hustling harder in my online business.” I love stories like that! And, I hear stuff like this 4-5 times a week! This gives me hope that what I’m doing is worth it — that I’m having a real impact on people’s lives!

The brand awareness, for me, is worth it.

Other people have figured this out, too.

For an example, look at Vaynermedia. They get a ton of business, and are clearing $50m in revenue (I bet the number is above $100 million now). Gary Vaynerchuk is extremely smart in what he does. He’s not getting all of this business because he ranks number one on Google for terms like “social media marketing.” You rarely, if ever, see a PPC ad for Vaynermedia.

How does Gary Vaynerchuk do it? Through brand awareness.

But, for some reason, a lot of new school companies have decided that we should focus our marketing efforts based on direct ROI… and that’s it.

But, let me ask you a question…

When you think about buying a sports or running shoe, what company comes to mind?

When you think about applying for a credit card, what company comes to your mind?

I bet it is either American Express or Visa!

Branding is powerful and in the long run it can make your business.

How much money does this take?!

The question is, how much money do you have to dump in before you start seeing results?

I can’t keep buying fans at this rate and you’ll see me slow down, because my Facebook ad frequency will get too high (the same people seeing my ad over and over, which is less effective than new people seeing your ad). I’m purchasing high-quality fans and these fans are an exhaustible resource.

I leverage my email list (which is quite large) to create lookalike audiences and target my ads to a 1% lookalike, which means that only people who are very similar to my current email subscribers will see the ad.

As big as my email list is, it’s not growing as fast as my Facebook fans are. Eventually, I’m going to reach a point of diminishing returns.

It’s not just about buying fans. It’s about creating engagement.

The key is not just having a ton of fans. The real key is engaging these fans.

You may have 5 million fans, but how well are you engaging these fans? Brendon Burchard, for example, has done a great job building a sizable fan base. 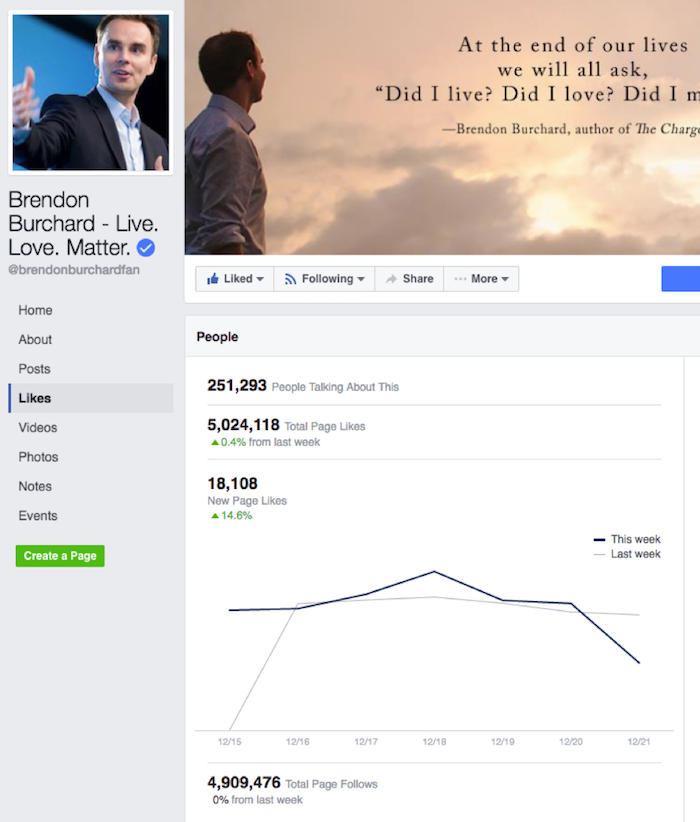 And, Brendon has done a decent job of engaging with his fans.  But, compare his engagement to Gary Vee’s. Gary’s fan base is only 28% the size of Brendon’s. But, Gary’s engagement is 8.8%, while Brendon’s is only 4.2%. And both of them crush me, because I just share links while they share videos and images, both of which tend to create more engagement.

One of Gary’s secret weapons is that he is relentless about posting video, especially Facebook Live. Facebook Live is essentially like having your own TV station! Why wouldn’t you want to reach out to your audience in this way?

Will I keep spending this amount of money on fans?

I won’t stop spending $12k+ a day until I fatigue my lookalike audience. Like I said, there’s not an unlimited supply of these folks.

I will keep posting insane content. I will ramp up my activity on Facebook Live. I will engage my audience in the most meaningful way possible.

And, of course, I will keep posting blog posts that gets thousands of likes and hundreds of shares. It may be hard to predict what’s going to be a hit on Facebook.  But, if you produce enough content, eventually you create pieces that your fans love.

Once you have a few hits, take those pieces of content and share them once a month. I don’t care if your fans have seen them, share the same ones over and over again, because they will still do well. Just look at the image above, I’ve shared that post 3 times on Facebook. As I said, people forget what they have seen, since 1.97 million blog posts get published on the web each day.

Why am I doing this?

One reason might be obvious to you. There’s revenue potential. Audiences like this are business opportunities. I have the opportunity to monetize an audience through strategic business building.

At a deeper level, however, it’s about giving more value to more people. If I have the ability to reach a wider audience and provide more good stuff to them, then I want to do that.