Decoding Success: How 3 of The Biggest Blogs in The World Achieved Glory

Blog / Decoding Success: How 3 of The Biggest Blogs in The World Achieved Glory 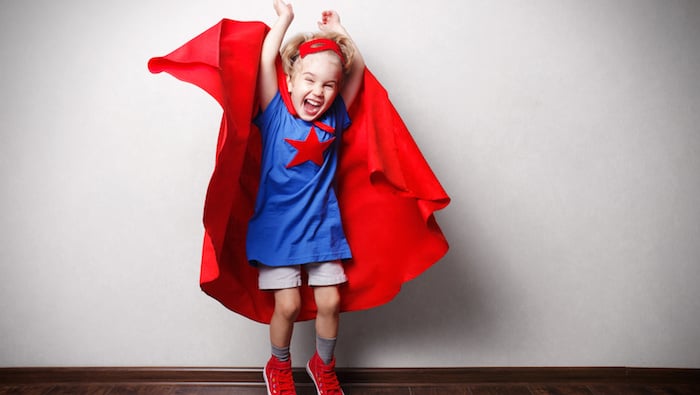 Some call it an art and write to express their feelings.

Some call it a science and approach every piece from their audience’s perspective.

Principles from both these writing avenues apply. You want to write from your heart to touch people’s lives. But, if there’s no strategy behind your writing and no distribution plan, you’re bound to fail.

So, popular blogging is more of an amalgamation of the two.

It’s both an art and a science. 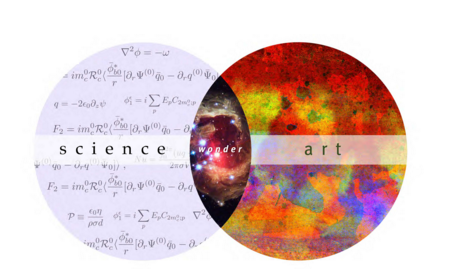 The blogging explosion started with the launch of blogger.com in August 1999.

Over a million blog posts are published every day. But, a few early adopters of blogging touch hundreds of millions of lives today. They have evolved with the rapidly changing blogosphere.

In this post, let’s reverse engineer the success of 5 of the biggest, most popular blogs in the world.

To give you an idea of each blog’s reach, I’ve listed its Alexa rank (both global and US) in the sub-title.

Arianna Huffington started Huff Po back in May, 2005.

It has had an impressive run that includes getting acquired by AOL for 316 million dollars and becoming the first commercially run digital enterprise to win a Pulitzer Prize in 2012.

They crossed 100 million unique monthly visitors (as per ComScore) in September, 2014 and are the number one news site in the US.

BI focuses on providing business news and in-depth analysis. But, they cover almost everything including lifestyle, technology and entertainment. 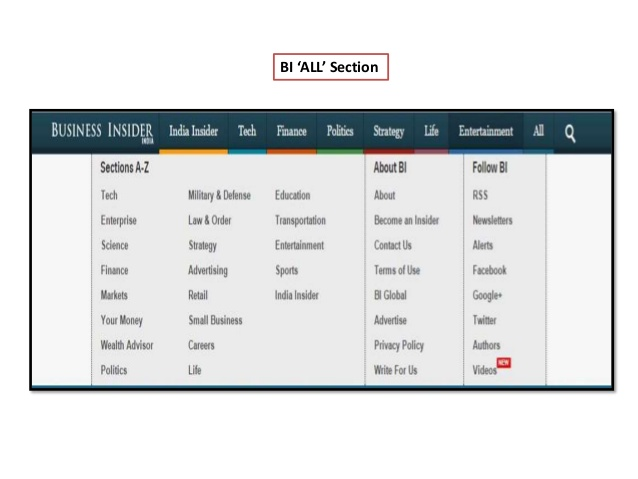 A differentiating factor about BI (versus The Wall Street Journal and other business publishers) is producing stories that appeal to the general public.

They stay away from business jargon. A study has found that their average Flesch reading ease is around 83.

They’ve been accused of using clickbait headlines, but it’s a great fit for their audience.

You cannot deny their mass appeal.

In Jan 2014, they surpassed WSJ’s readership.

A few years back, BI was acquired by German publisher Axel Springer for 343 million dollars.

BuzzFeed was started in 2006 by Jonah Peretti (also a founder of Huffington Post) and John Johnson.

Their focus is publishing entertaining and highly shareable content in its 28+ sections. Their content is graphic-heavy containing images, memes, gifs and videos.

In 2014, they had huge success with quizzes (hitting a million page views most times).

At a certain point, BuzzFeed was so engrossed in lists that Conan O’Brien poked fun at some of their articles.

But, it also goes to show BuzzFeed’s mass audience reach and how it is being recognized as an integral part of the web culture.

Currently, their web site mentions possessing a global audience of over 200 million from 10 international editions.

Mastering The Art Of Headline Writing – How many times have you heard it already?

Your high-quality content piece needs equally seductive packaging. You’ve got to craft headlines that pique the curiosity of a visitor and get him to click on your article.

Otherwise, your content will lie alone somewhere in a secluded corner of the internet.

BuzzFeed has redefined this art of teasing. They write headlines that toy with your curiosity, integrate pop trends and instantly grab your attention.

Just look at some of their viral headlines. 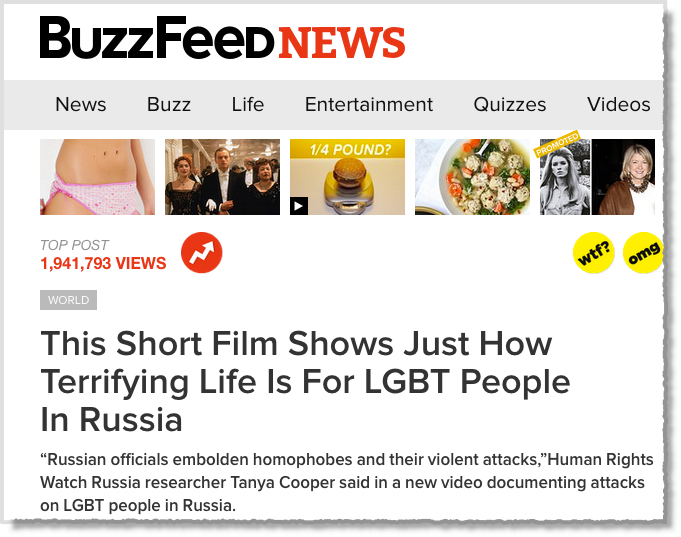 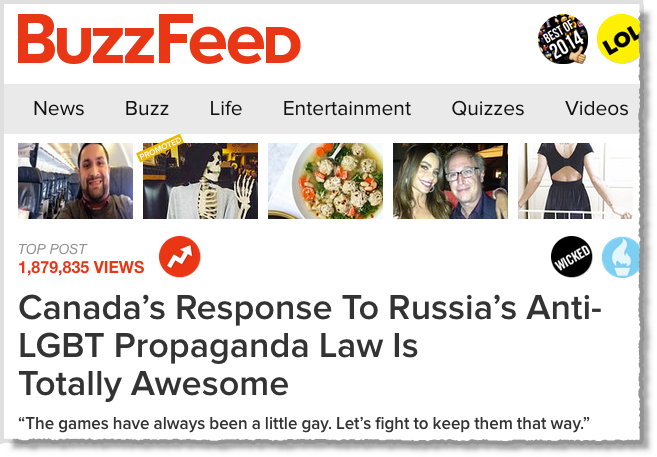 On the other hand, they’ve been accused of using clickbait titles and not delivering on their headlines promises with their content.

The typical, popular headlines “You won’t believe”, “blow your mind” and “you didn’t know” headlines have been popularized by BuzzFeed. 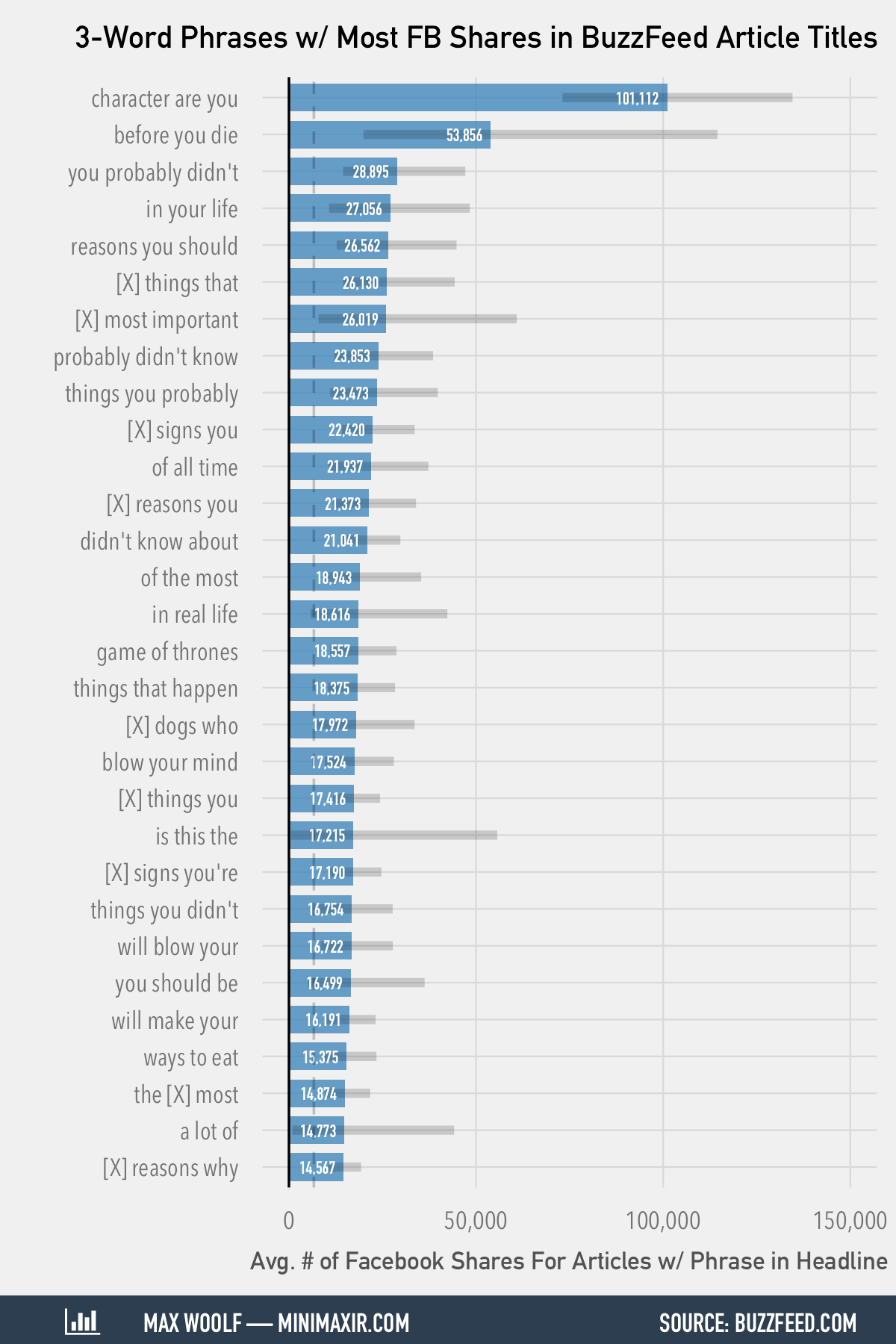 But, their success with hooking the audience cannot be denied.

Sonya Song, a media researcher, analyzed and found that BuzzFeed manipulates both fast and slow thinking to win clicks and engagement from their audience.

Occasionally, even Brian Dean relies on BuzzFeed headlines to write his post sub-titles and titles.

He compiled a list of headline templates from BuzzFeed that aren’t over the top.

So what’s the secret behind their massively successful headlines?

BuzzFeed has custom, built-in systems. Jonah Peretti talked about this way back in 2012.

The BuzzFeed editors use this technology to test the headlines and images in the first couple of hours after publishing a post.

Serving content in preferred audience format: video, quiz or other digitally native format – As a publisher, it’s important to write compelling stories. But, equally important is marrying them to the correct formats.

Why else would people care to view your stories?

The success of the quiz format on BuzzFeed was because people like to know (and share) their individuality.

But, a particular story or idea might better fit in the format of a list with gifs.

How about going a step further by embedding tweets, pins and making the content interactive?

BuzzFeed does exactly that.

They don’t try to recreate print and they use digitally native formats.

In 2013, BuzzFeed invested in building a social video studio. They partnered with YouTube with the same goal.

But, BuzzFeed saw the massive cultural shift of its audience to mobile and video content. So, they took the plunge to aggressively expand their video production.

Has this video investment paid off? 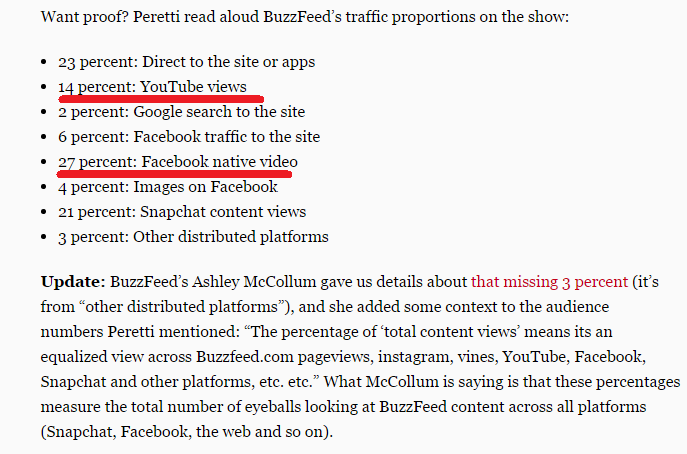 Let’s move on to BuzzFeed’s next massively successful format.

The internet (and particularly BuzzFeed) were experiencing a lists fatigue. Top 10 things, the 10 best ways, the 10 reasons and other such phrases were losing their shine.

So BuzzFeed revolutionized the internet by introducing….

Their Quiz empire is credited with launching “What City should you actually live in?” 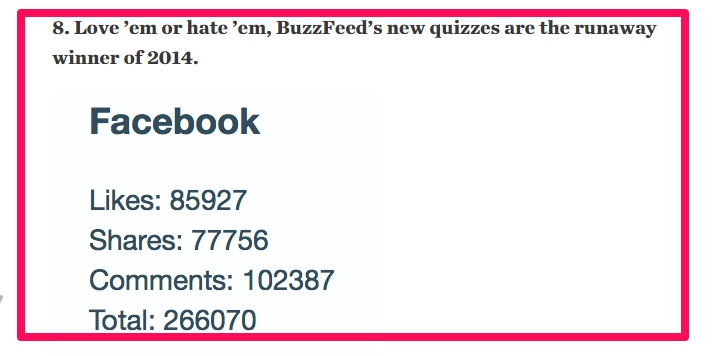 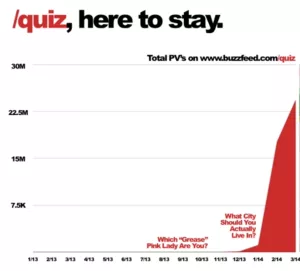 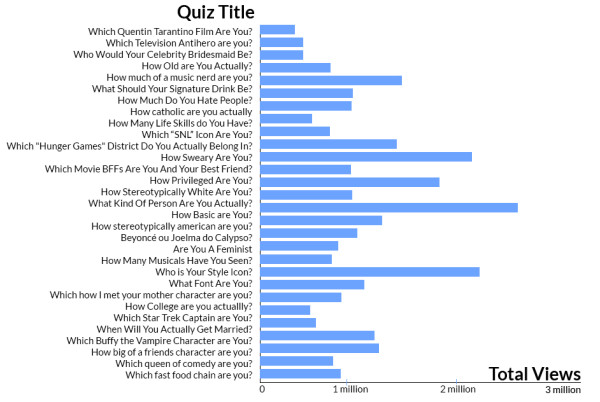 The high-frequency of publishing (700+ pieces/day) is a pivotal factor in BuzzFeed’s success. But, crafting content in the most appropriate format has played an equally important role in attracting those 200M views.

But, since late 2011, BuzzFeed has expanded into serious investigative journalism. It started with the appointment of Ben Smith (from Politico) as their chief-editor. 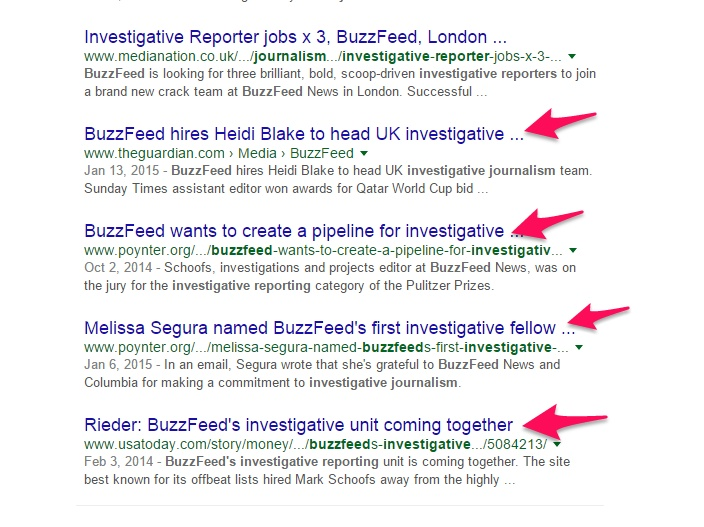 They have a dedicated section for long-form content. And, in 2015, they announced plans to hire journalists from around the world to beef up their news coverage.

Contently puts it aptly – BuzzFeed is funding its journalism from its entertaining content.

Wonder how investigative journalism is carried out?

BuzzFeed is really serious about polishing its image through this sustainable data journalism. Ben Smith is ready to put BuzzFeed’s website traffic ranking on the line to help BuzzFeed achieve journalistic credibility. 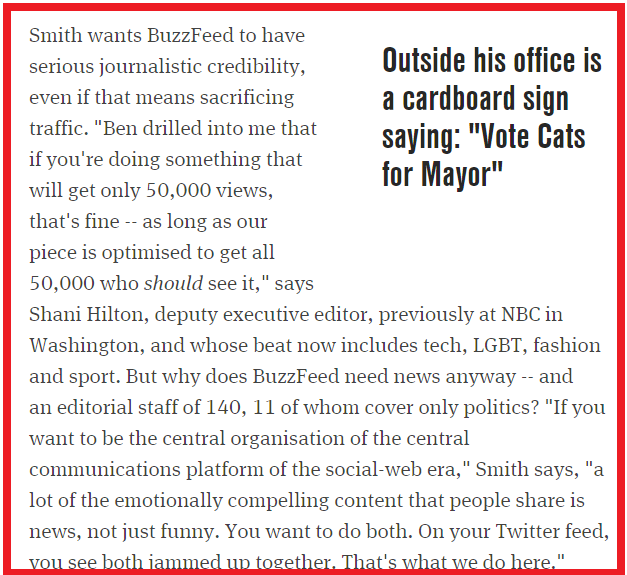 Sonya Song explains that the journalistic in-depth stories with data visualizations are tailored to appeal to the BuzzFeed audience. 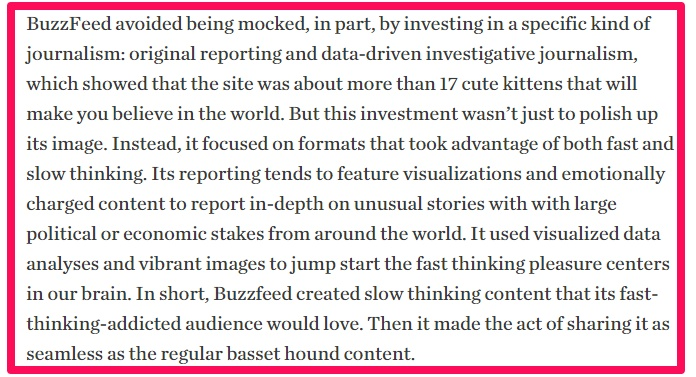 There isn’t a set path to achieve success for a popular blog.

But, there are some commonalities pivotal to the success of the 3 biggest, most popular blogs in the world. Let’s review some of these actionable takeaways.

Building a personalized backend technology – All 3 popular blogs had a customized content management system to ensure that their editors can easily publish, test and tweak posts.

Publishing high-quality content with journalistic value – Both Business Insider and BuzzFeed have invested resources in creating top-notch long-form content. Such sustainable value-adding content has helped in lifting their brands.

Building a community of like-minded individuals – The trick to popular blogging is about inspiring your audience to take action. The high volume of content publishing and a high degree of engagement on these 3 blogs has been possible only because of community participation in writing/commenting on posts.

Heavily investing in creating video content – Videos are the most consumed content on mobile. All 3 popular blogs have invested millions of dollars in building professional video teams that produce engaging videos regularly.

Is there an A-league popular blogging strategy you’ve had success with – like video or long-form popular blog content?