It’s hard to imagine that a company with lots of resources can fail. With an estimated 172 million uniques every month to their homepage, Google can (and often do) promote their products. To put it into perspective, advertisers paid an estimated $3.5 million for a 30 second spot in Super Bowl XLVI, which got 111.3 million pairs of eyeballs. So how can any of their products possibly fail?

In this post i’ll lay out five products Google made that have flopped. The ones I’ve included here have officially been discontinued by Google. I’ll also give my opinion as to why they failed, and what we can learn from them. 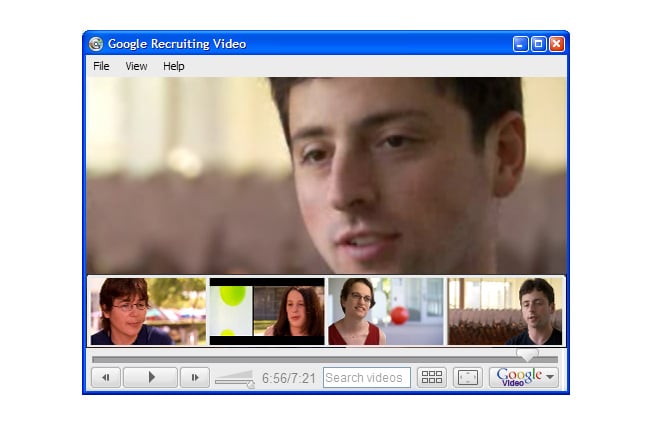 It would be unfair to call Google Video a failure. Google Video launched in late January 2005 and 22 months later Google bought YouTube for $1.65 billion, prompting some to call it a bad acquisition.

Now YouTube may be worth $45.7 billion. Any video you want to find on Google Video can be found on YouTube, all the videos have transferred over.

So Google Video is not necessarily a failure, but Google Video Player failed. It was kept around for 10 months after the YouTube acquisition, and then discontinued. It lasted two years in total.

Google Video wasn’t a bad concept. It allowed people to download videos from Google Video and watch videos in full screen, something a little more difficult back in 2007. The problem was that nobody needed another video player. It was a nice to have, instead of something that people needed. Bottom line: it didn’t solve any problems. Google Buzz was essentially Google’s clone to Twitter. It integrated right into Gmail and allowed users to posts links, photos, status updates and videos. Generally Google doesn’t do well if they’re not first to market, and this was one of those products.

There wasn’t any major improvement over Twitter. The Buzz interface was more crowded, didn’t have a character limit and had major privacy concerns from the very beginning. People had no reason to move from Twitter to Buzz and it didn’t have enough advantage over Twitter.

Simply integrating Buzz into Gmail wasn’t enough. The privacy concerns surrounding Buzz and Gmail didn’t help. While Google did address these concerns, the lack of competitive advantage over Twitter lead to low user adoption, forcing Google to shut down Buzz. 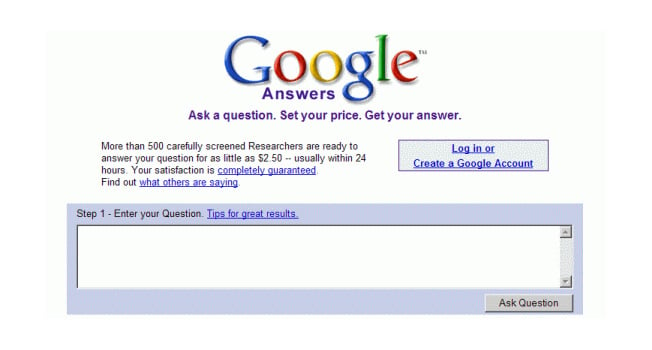 The Google Answers concept is good – a user pays a researcher for an answer to a question they have, the researcher gets paid and Google gets a cut of it. It works for all parties. It seemed, however, that most people chose to ask their questions on forums or Yahoo! Answers, opting for the free route and trusting that the responses are valid.

With the addition of Quora, where users select the response that they find most valid and sufficient, it makes it difficult to give a person a reason to pay for an answer.

While Yahoo! Answers appears more like a teenage chat room and declines in traffic, people are turning to search, Quora (early adopters) and asking friends on Facebook—all for free.

If there are alternatives to your product that are free, you may have a difficult time getting traction. If it’s possible for a company to profitably offer a product similar to yours for free, you may be in deep water. Any successful company will get a competitor that will undercut your prices.

Google Answers faced a free competitor like Yahoo! Answers, forums and even Google search itself, all of which are free. Most people don’t want to pay if they don’t have to. It may be helpful to offer a freemium service. 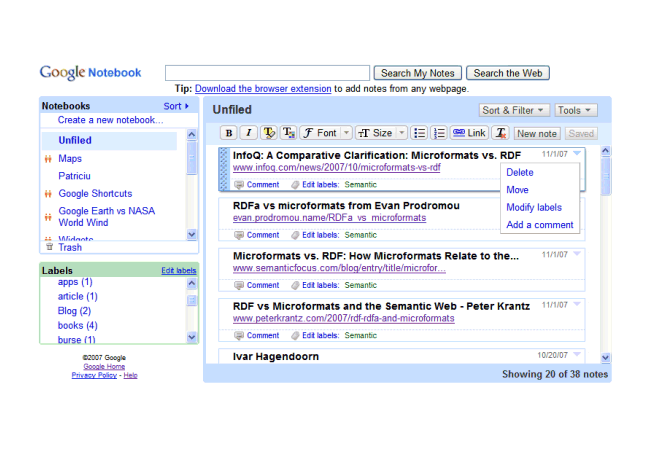 As an avid note taker, I was thrilled when Google began offering Google Notebook. I wasn’t happy with the outdated Microsoft Notepad. I was using Yahoo! Notepad and found Google Notebook to be a downgrade. The design was a major disappointment and I found it much more difficult to use. Google did offer a few features such as clipping of web pages with a browser extension and the sharing of notes.

It’s tough to say how popular a note taking application could have gotten. Google made a smooth transition from Notebook into the now popular Google Docs.

Why is Google Notebook a failure while Evernote is a success? Evernote has had consistent growth in traffic due to their support of multiple platforms-much like Dropbox.

You can access your notes from almost any device.

They’ve streamlined nicely with the rise of smart phones and tablets. Evernote filled a need that people had. Operating System apps like Windows Notepad or Apple Notes couldn’t sync to any device.

Windows Notepad or Google Notebook is great if you’re only by your computer all the time. Most people aren’t anymore and need to access their notes from anywhere.

Evernote has taken that problem and many others and is now profiting from it.

Google Notebook wasn’t a bad concept; it just didn’t go far enough in helping the user in their day-to-day life. 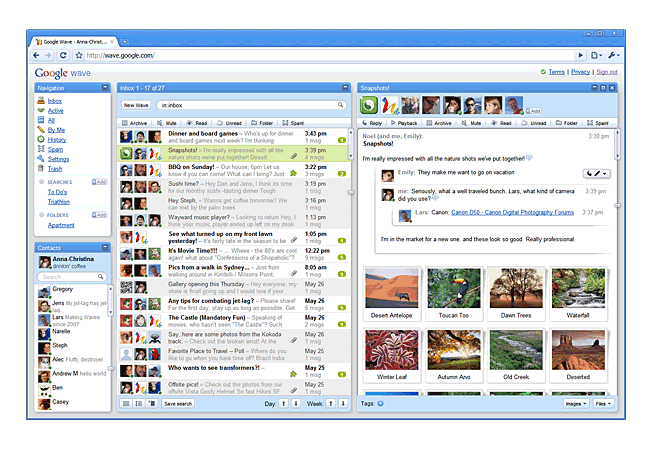 It’s tough to explain in a sentence what Google Wave was. Google explained it as “A wave is a live, shared space on the web where people can discuss and work together using richly formatted text, photos, videos, maps, and more.”

One of Wave’s developers said, “Wave is what email would look like if it were invented today.”

Google had high hopes for Wave, but it failed to cross the chasm.

Wave didn’t launch as an MVP. It was filled with lots of features that Google assumed people wanted. It was a complex product that required an investment of a user’s time just to understand how it works.

Hyped launches do not matter, and it some cases can be a detriment to the product. For almost any business, it’s better to start small and launch as an MVP. Wave might have worked for the tech crowd, but beyond that it left users with a collective yawn.

Let’s Go Over Some Google Successes

Around the time of Gmail’s launch, the average inbox size was around 4 megabytes. It was a problem for many people, as their inbox spaced reached its limit quickly. Google solved this problem for people in a big way, offering 1GB at launch. It was so surprising at the time that many thought it was an April Fool’s day prank. As if the increase in storage space wasn’t enough, Google made an impressive interface.

People thought at the time of Chrome’s launch, “Why do we need another web browser?”

Turns out that it doesn’t matter if it’s another product, but rather the improvement over the incumbents that matters. Chrome was quite an improvement it was (and is) much faster and offered a cleaner interface than the browsers that were currently on the market.

Free document collaboration in the cloud has saved people who don’t want to pay for Microsoft Office or aren’t aware of any open source solutions. It solved problems and is something people want, which is the ultimate recipe for success.

Before his death, Steve Jobs gave advice to Google CEO Larry Page, telling him to trim the fat out of the product line. Hopefully, Page will heed this advice. At the time of this writing, Google has 46 separate products.

Focus is key in a startup, and it’s difficult to focus if you have 46 products. Focus is about saying no. It would be advantageous for both large companies and startups to follow Jobs’ advice. It would lead to a lot less failures.