A Neil Patel SEO Recipe – Add a Dash of This Tweet Sauce to Boost Your Search Engine Rankings!

There’s no question about the value of getting more tweets to get more exposure for you and your site…but now there is evidence that tweets (including retweets) actually impact your rankings.

The results of this recent study by branded3 suggested that URLs that were shared on Twitter got a boost in rankings. For example:

Here’s a quick snapshot of ranking positions based upon tweets:

To give you an idea of what kind of URLs get that kind of action…and why…I did an informal study on my site to see which of my posts got 1,000 tweets or more. My goal was to dig up my findings and share them with you.

I looked over the last six months of posts, and the typical tweet range is between 5,000 and 150 tweets…with 1,000 being pretty average.

Keep in mind that most of these posts with 1,000-plus tweets are usually surrounded by posts that are all over the map in regards to tweets…from 200 to 700…meaning I think that these 1,000-plus ones did something tweet worthy, so most of the following lessons will be on the 1,000-plus posts, so let’s get started.

And for most of these posts I rank on the first page for that particular keyword…in other words, getting more tweets does work.

Let’s go over some posts that did well and discuss which ingredients were used to get them to rank high!

This post also consists of lots of images that help you digest the dense material. In some places it gets very complicated, so images become very useful.

There are also a number of tools introduced in this post that are probably new to readers, and I end with a good piece of advice…backed up with research…about blogging consistently.

I think another reason that this post is doing so well is that it is about blogging…which is always a favorite topic to share on Twitter.

This is also true for my blog post The 3-Step Secret to More Quality Links in Less Time.

Ever since we learned that link authority is a huge factor in the Google search algo, link building has been a hot topic…so discussing it and then sharing it on Twitter makes sense (in that it’s a topic that is primed to get retweets).

It’s a pretty simple post in comparison to the last one in that there are only three steps, which can make it appealing to readers. But I also mentioned how these three steps can save time…which is a huge benefit for people who are super busy! 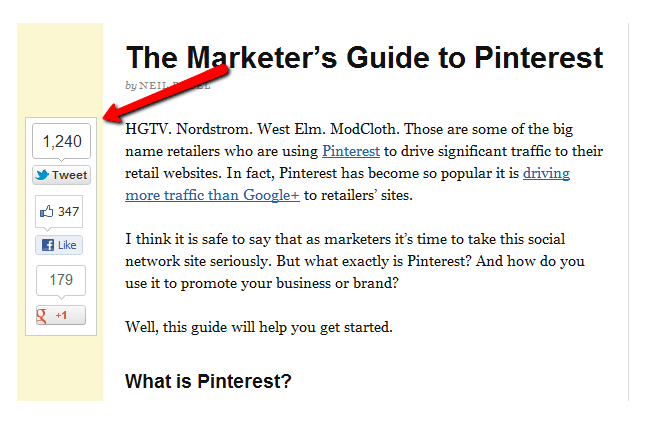 Another great content idea is to create an ultimate guide like The Marketer’s Guide to Pinterest that has gotten over 1,200 tweets since I posted it back in early February.

“Ultimate Guides” are a great way to drive traffic to your site and get people to spread them…especially if you can create one on a topic before anyone else.

There is a great post on Creating Ultimate Guides and Using Them to Build Your Marketing List right here on the blog. 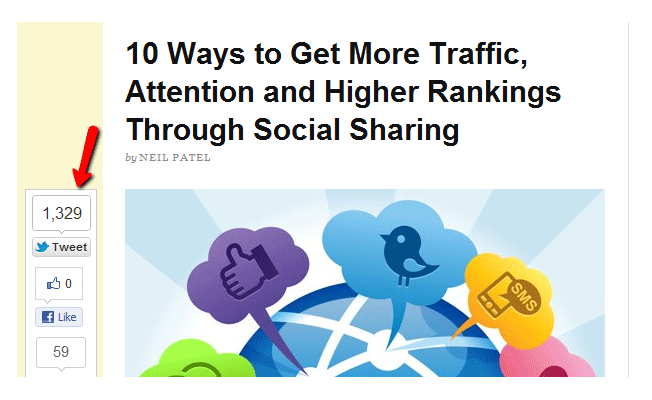 Because Twitter is part of the social media world, it makes sense that if you write about a topic in social media that it will do well, like the post 10 Ways to Get More Traffic, Attention and Higher Rankings Through Social Sharing.

This post also did well because it was a “top ten” post that gave you three very specific benefits: more traffic, greater attention and high rankings.

Another good example is from my How to Create a Jaw-Dropping Social Media Strategy in 5 Steps. This gave you great information about creating a killer social media strategy in a step-by-step format.

When you make information easy to digest…readers will love you! 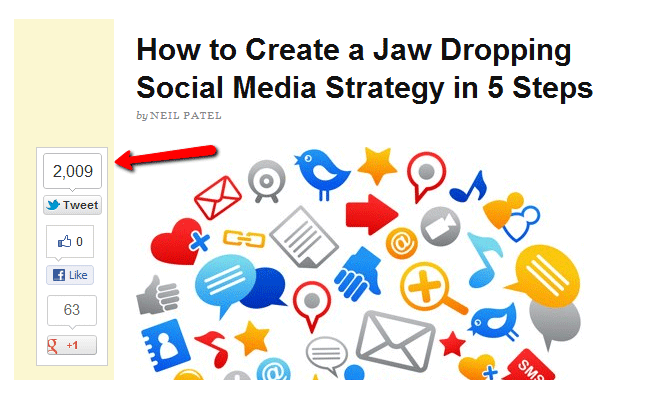 In addition, the words “Jaw Dropping” add a startling element to the headline that people enjoy showing off in their Twitter streams.

And what a better way to do this than writing a post about 10 Ways to Get More Retweets to generate a whole bunch of retweets! 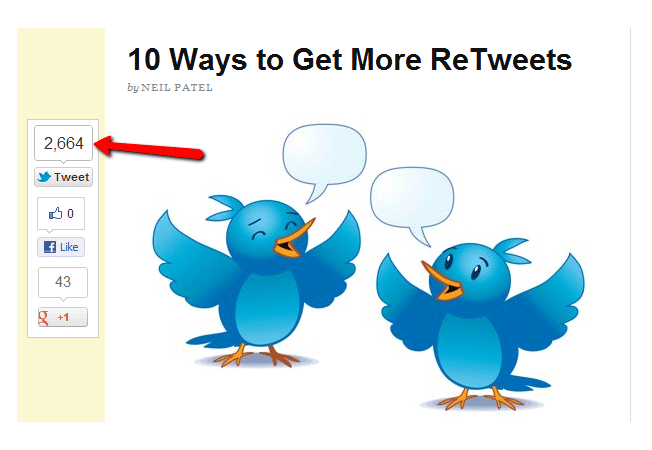 I share lots of research, which always gives the information more credibility…and if it is new, cutting-edge research…then your chances of getting your content ranked – goes even higher. 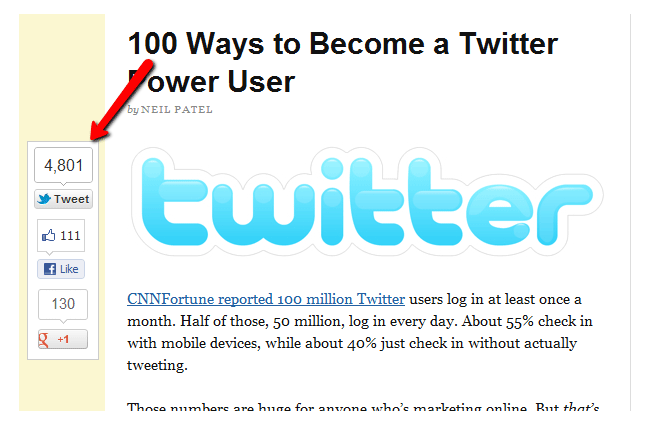 The sort of ultimate way to get tweets on your content is to do something that is not only about Twitter…but is a one-stop location for a huge amount of resources that will make someone a Twitter rock star…which is what I did with my 100 Ways to Become a Twitter Power User.

There have been a lot of ultimate guides on Twitter published, so you’ll have to get creative. And more importantly, you’ll have to out-do all the rest to get the necessary attention. As you do your research look for gaps and missing topics on Twitter…and then try to fill it.

And don’t forget to give a compelling benefit to the reader! 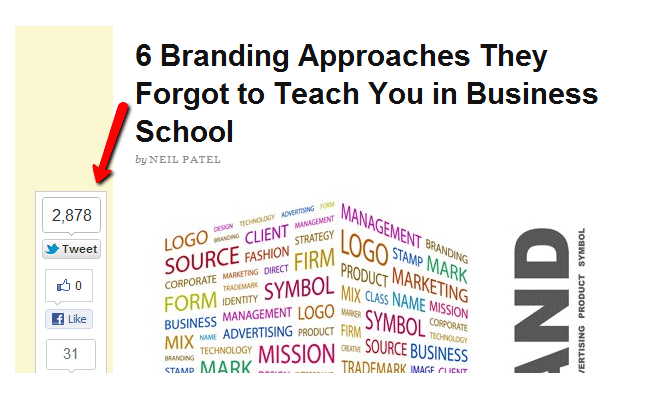 If you can offer original advice that swims against the grain of popular thinking, then you can probably create a piece of content that will get a huge amount of tweets on Twitter.

For example, Bnnon Tennant’s post on The Shocking Truth About How Web Graphics Affect Conversions went against the grain and went viral the first day it was published.

My 6 Branding Approaches They Forgot to Teach You in Business School pokes fun at MBAs, which stirs up the classic controversy between business school types vs. the street smart business person. When you write a post about a current event…and then twist it into “lessons learned”…you can ride the wave of popularity on that particular news trend.

How do you find out what is trending? One way is to browse all of the popular blogs every day. Another way is to use Google Trends.

It really comes down to paying attention to what people are talking about. When I started hearing the co-founder of DropBox Drew Houston’s name being mentioned everywhere I knew it was time to write the 6 Business Lessons You Can Learn from the Rise of Dropbox.

You can also do this with popular topics like the presidential race or some scandal that is breaking out. Just pay attention to what is being published. 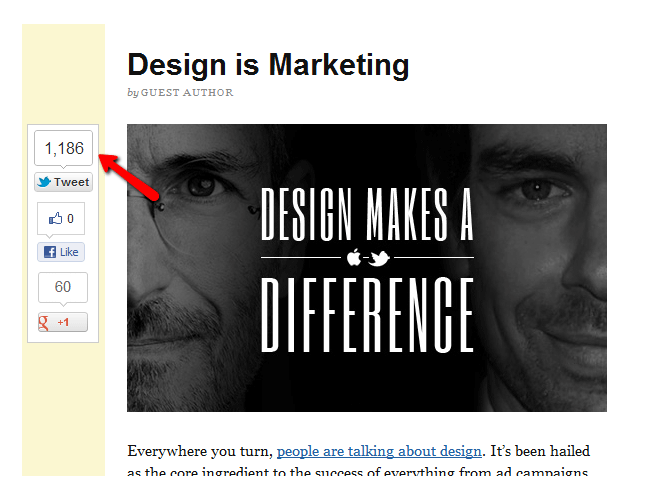 Sometimes it’s just a matter of sharing really great web designs like Chuck Longanecker did in his guest post on QuickSprout called Design Is Marketing.

But the post really worked because each point that Chuck made was positioned as a benefit for the reader…meaning he showed you how great design can get you more clicks, sign ups, followers and sales.

Blog for the Right Audience

There are two ways of looking at this…size and quality.

What I mean by size is that you can get a web page ranking if you write it for a huge audience. If you don’t have a huge audience that could generate 5,000 tweets, then this means you need to guest post somewhere.

That’s why the strategy of what your guest post topic is about is just as important as where it’s published. For example, even though you might be writing for another blogger and getting that page ranked high, this will still bring you exposure since you are the author of that article.

If this big blog combines the tricks with Google Authorship Markup, then you are in business with high rankings and high conversion rates!

Now let’s talk about the quality of that audience.

Mashable has an audience of readers that are primed to share stuff on Twitter. Not so with larger publications like CNN or Popular Mechanics, for example.

For example, here is a screenshot of the most popular posts shared on Twitter: 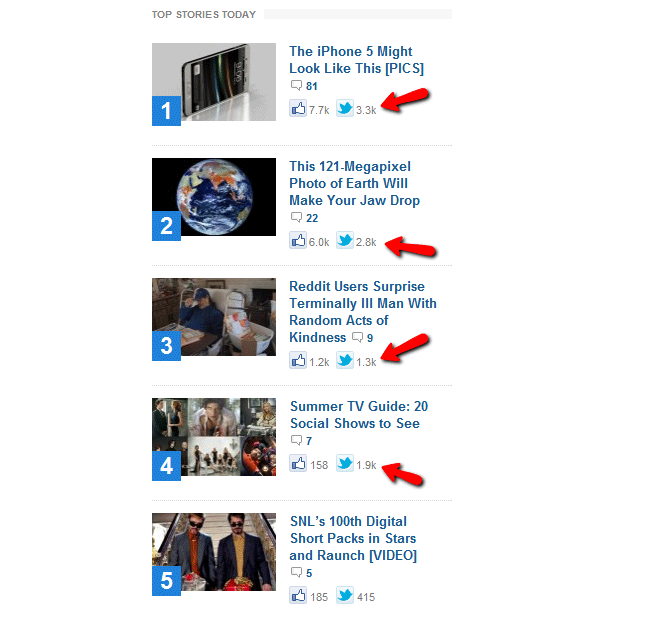 All of those were posted within 24 hours…showing you the size of their reach.

So if you write a guest post for Mashable, you are bound to get a ton of tweets because the audience likes to share stuff on Twitter. So makes sure you write on a topic you want to get ranked for…because if what you write combines any of the tactics I shared above…it will likely blow up on you!

I didn’t share a section that said here are the topics that you should avoid…because I believe that the reason those pages didn’t get as many tweets is not that they weren’t any good…but that they were geared to a specific audience…like posts about specific SEO tactics or email newsletter autoresponder marketing strategies…something that may not interest a general audience.

My recommendation to you is not to give up on those posts that don’t generate huge amounts of tweets…because they are just as important in your content marketing strategy since they provide technical information that people will want to see.