17 Charts That Show Where Social Media is Heading

Blog / 17 Charts That Show Where Social Media is Heading 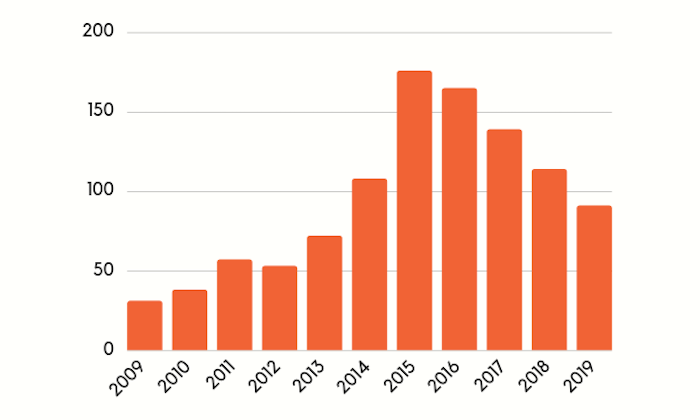 You already know it’s harder to get traffic from the social web unless you spend money on ads.

There’s nothing new with that fact… just look at the graph above: It breaks down how the average number of social shares per blog post has been dying year over year.

These social sites command so much traffic, that we have no choice but to be on them.

Just look at the Similar Web numbers for Facebook… they get an estimated 19.2 billion visits a month.

That’s ridiculous! And it’s not just Facebook either… according to Similar Web, all of the big platforms get tons of traffic:

In other words, whether you like their algorithm tweaks or not, you have no choice but to be on these platforms as they attract so many eyeballs.

So, what should you do with your organic social reach? How should you combat their algorithms so you can generate a positive ROI as their ad prices keep going up?

Well, I surveyed 183 companies that generate at least 5 million dollars in revenue a year all the way up to $1.7 billion to show you where social media is headed and what you should do to succeed in the landscape.

Let’s dive into the data…

Expect less traffic from the social web, even if you pay for it

Look at the graph below. What do you see? 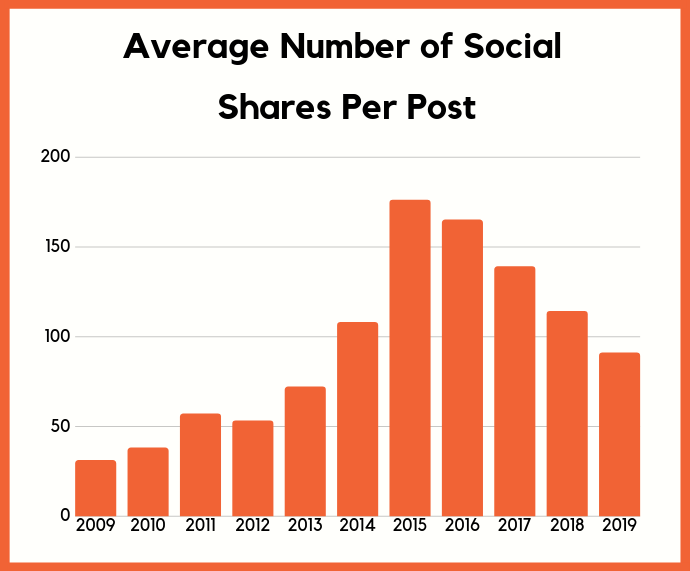 Since 2015, the amount of shares a blog post receives from the social web has been declining. One of the large reasons for social sites to clamp down on organic reach is that that makes it so you need to spend money to get the reach that you were once used to and relied upon to generate traffic. 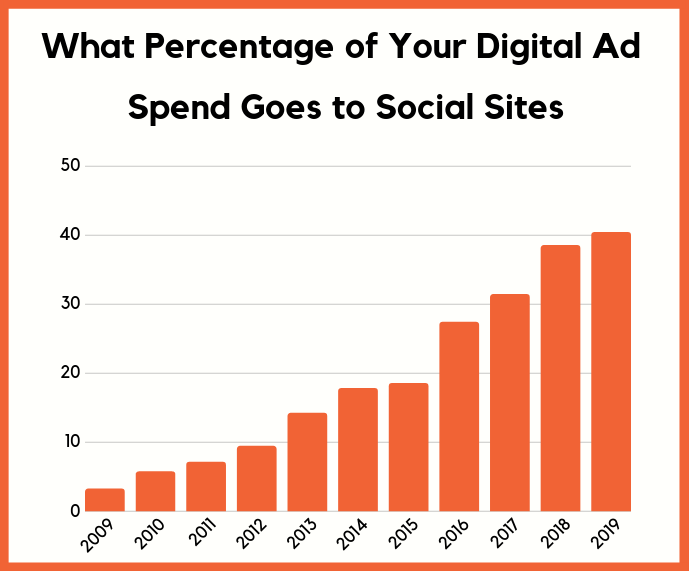 Over time it has increased, and you’ll notice that things really started to ramp up in 2016.

An interesting fact is that in the United States during mid-2017, Facebook had more advertisers than inventory. In other words, the demand was higher than the supply which caused CPM and CPC rates to increase.

But similar to the game of cat and mouse SEOs play with Google, marketers also play that game with social networks. In recent years, marketers have figured out how to reverse the trend of their dying organic reach. 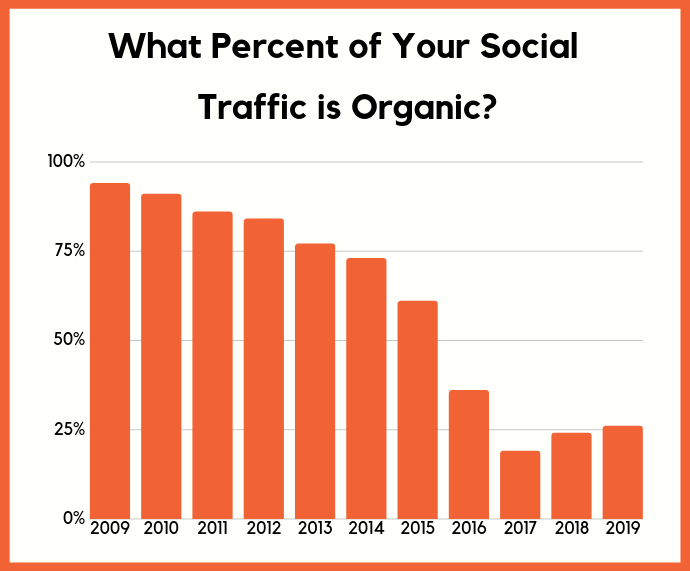 2017 was a low point, but since then marketers have figured out a way to boost organic social traffic.

It won’t last forever… but can you guess how?

Don’t expect your employees to help 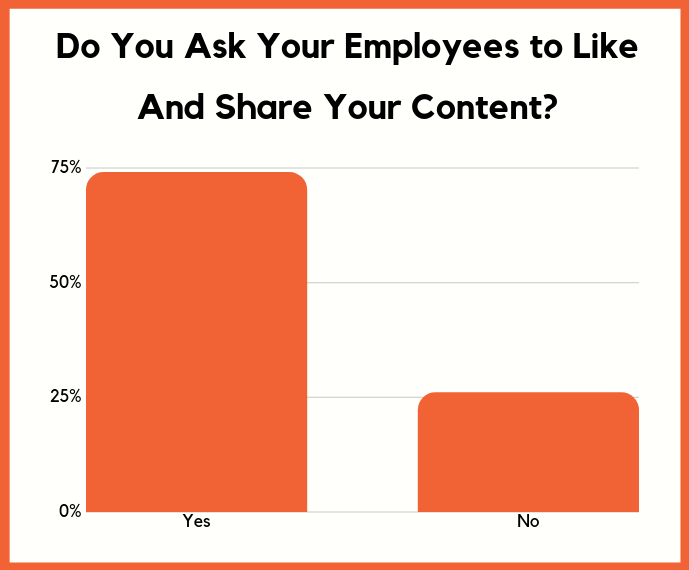 But then I stopped because the majority of my employees didn’t want to share the content. And it’s not just my companies, other companies experienced the same thing.

In other words, the first few times you ask your team members to share, they’ll do it. After a while, they’ll ignore you.

So how are marketers boosting their organic reach?

You have to use chatbots

Here’s how much time companies are spending on each form of social media content. 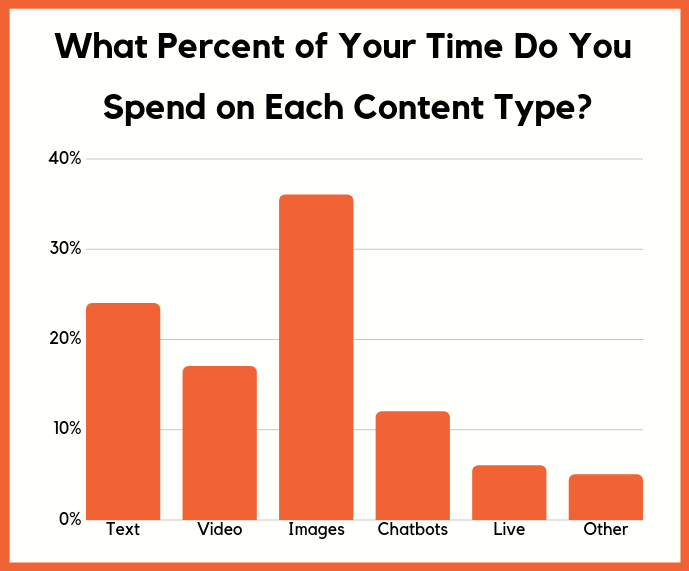 As you can see, everyone loves posting images and text-based updates because they are easy to post.

But they don’t produce the best engagement. It’s actually live video and other forms of video. 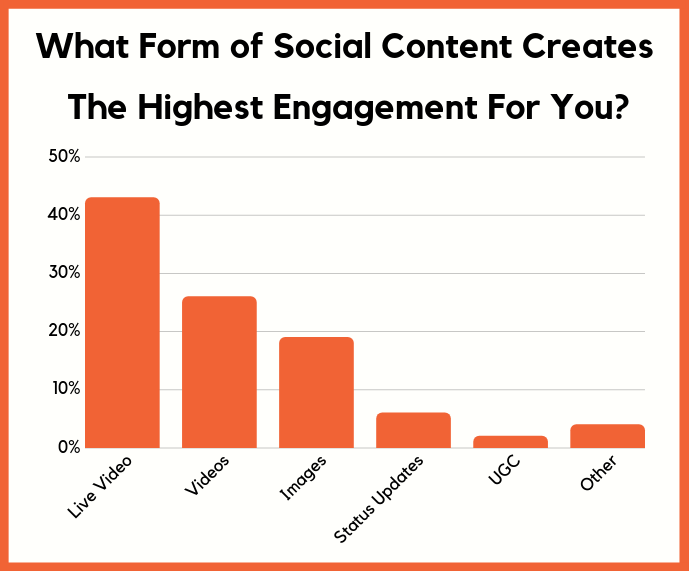 Social platforms are trying to compete with television networks and they are even competing with platforms like Netflix.

So, if you want the most engagement you have to feed into their goals. If you start producing live video or even recorded video, you’ll find that you can boost your engagement. What this will do is get more of your followers engaged so when you post other forms of content they’ll be a higher probability that the content will be seen.

The other reason videos work so well is because they keep people on these social platforms versus driving people back to your site.

But of course, you want your followers to go back to your site… and you can do that through chatbots. 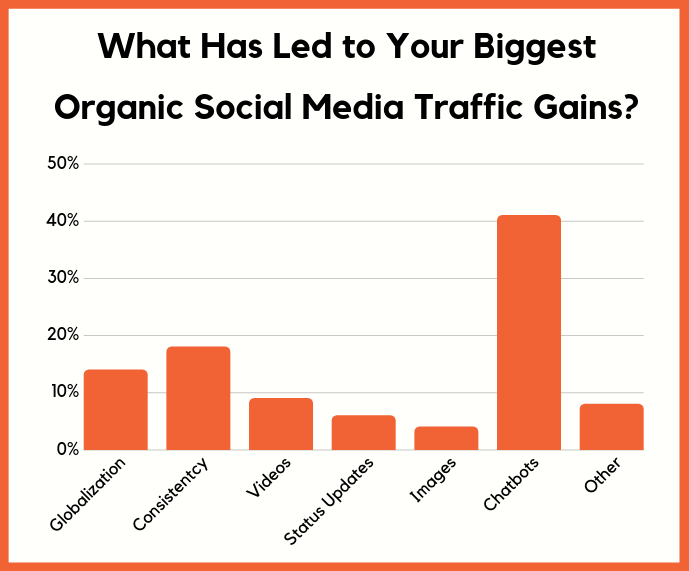 As you can see, 41% of the companies reported that chatbots (also knowns as messenger bots for social sites) provided their biggest traffic gains.

The chances are you aren’t using messenger bots yet, but they are super effective. Just follow this guide and it will walk you through setting them up.

Now, not every social network has messenger bots, but over time you’ll see this change.

You’ll have to start expanding globally

I’ve been blogging a lot about global expansion from an SEO perspective, but the same goes from a social media perspective as well. 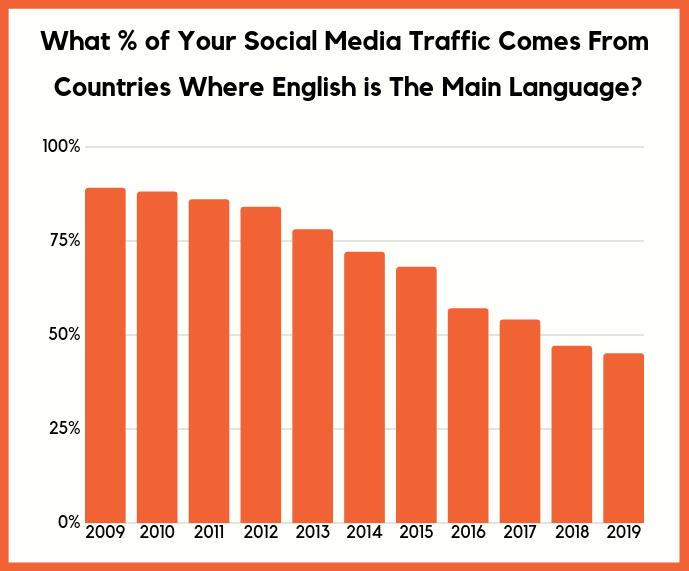 The chart above clearly shows how people are now getting traffic from regions where English wasn’t the native language.

And as companies noticed that trend, they also started posting their social content in multiple languages. 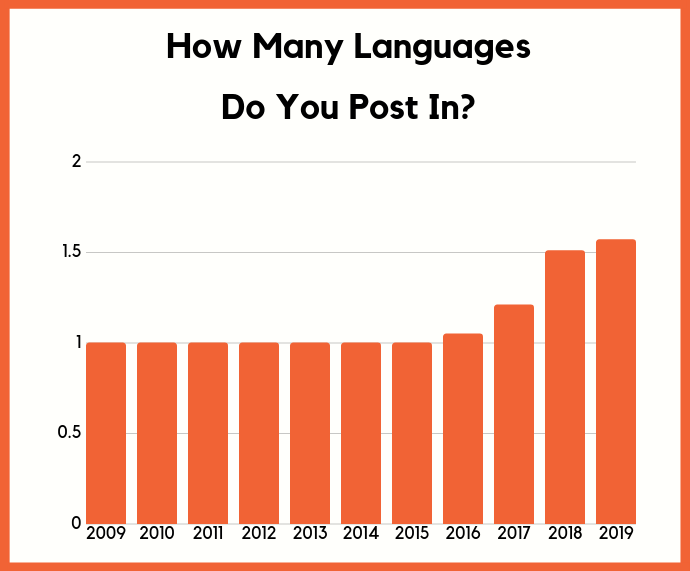 You’ll see a trend of this continuing over the next few years in which companies will be leveraging globalization as social marketing campaigns in non-English speaking countries in most cases is more profitable.

If you want the most out of your organic social traffic and paid ads you should consider posting content in multiple languages. 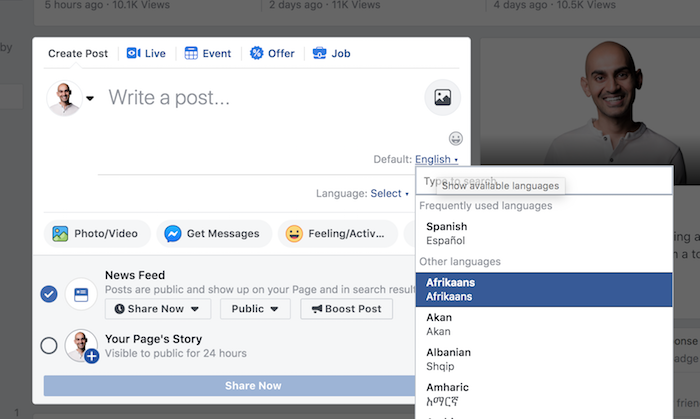 When you also look at it from an advertising perspective, ads are expensive in regions like the United States, Japan, Canada, United Kingdom, Germany… but they aren’t as costly in most parts of Latin America and Asia.

Now let’s look at social media from a sales perspective.

Here’s how to maximize your social media revenue

Similar to content marketing, don’t expect social media visitors to convert right when they land on your site.

On average, a social media visitor will convert after 3 visits. 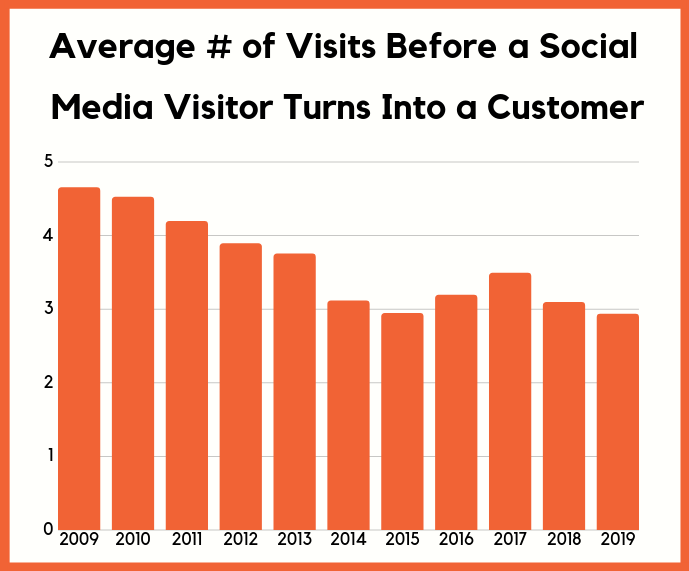 That means you are going to have to focus on getting people to continue to come back to your site if you want more sales.

In other words, you’ll have to play the long game.

The simplest way to do this is to remarket your social visitors. But there are other solutions as well that you aren’t currently using. 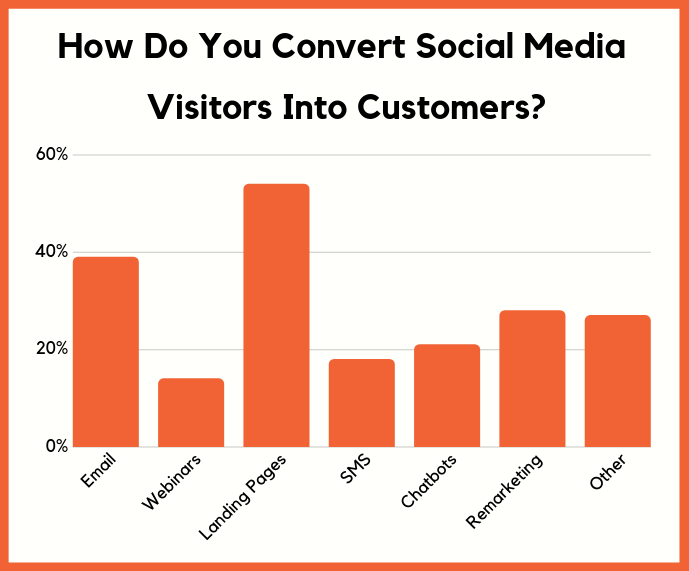 You can use a combination of the methods above. You’ll find that one won’t be enough and you’ll have to combine a handful of methods, including SMS.

You’re probably not using SMS marketing yet, but did you know that when I send SMS messages my response rates are 68%?!

But there are multiple ways to boost your sales from social media, including focusing on specific content types.

Did you know that if you leverage chatbots (messenger bots) and post video-based content you’ll generate more sales on average than if you just posted status updates? 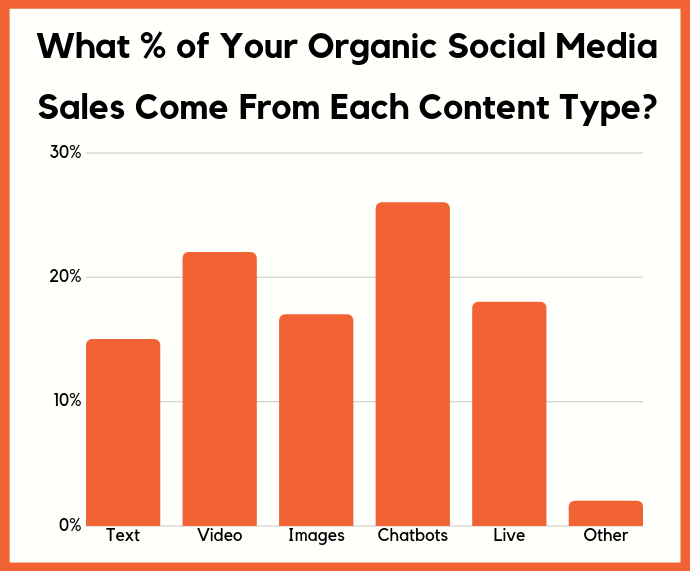 I know that sounds counterintuitive as it is easier to drive people to your site using status updates than to create a video, but you have to consider that social algorithms favor video.

You can also optimize your sales by picking specific social networks

Sales is a complicated formula. There’s more to growing your revenue than just focusing on specific types of content social media sites love and optimizing your landing pages.

To get a full picture, you also have to look at the first touch and last touch sales.

First touch sales are the traffic source that people first found you from. They don’t necessarily convert right then and there, but it’s the way they first found you. 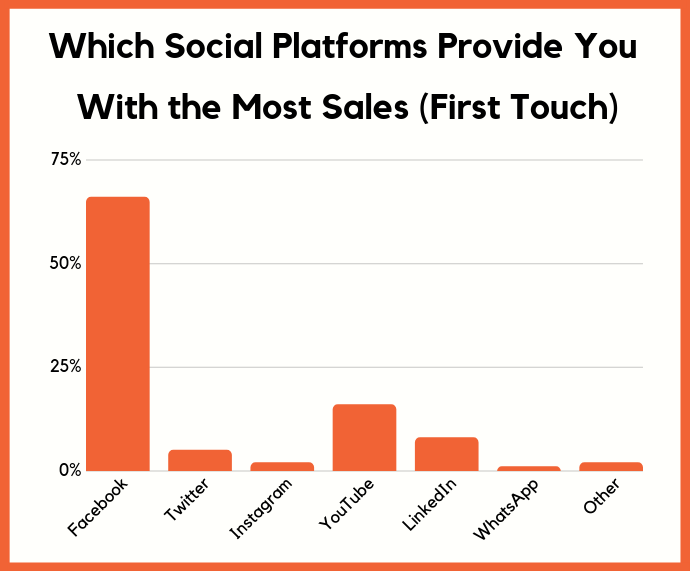 It’s no shocker, but Facebook is the leader when it comes to first touch sales.

Now let’s look at last touch sales, which is where a visitor comes from right before they convert. Remember, someone may have found your site from Facebook, but they may not convert right away. 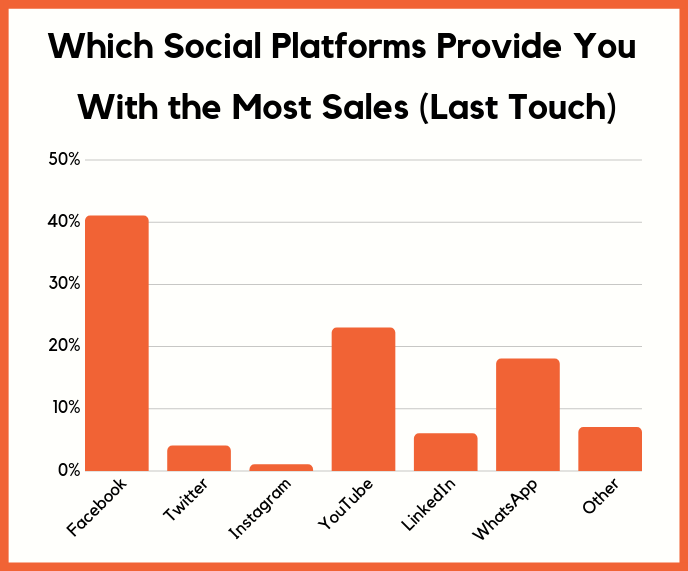 Sure, Facebook is still the winner, but YouTube is a close second and, shockingly, WhatsApp is in 3rd place.

It makes sense as texting has an extremely high open and click rate. I know you aren’t using WhatsApp for your business yet because that’s what the data shows, but you should check out their business API. 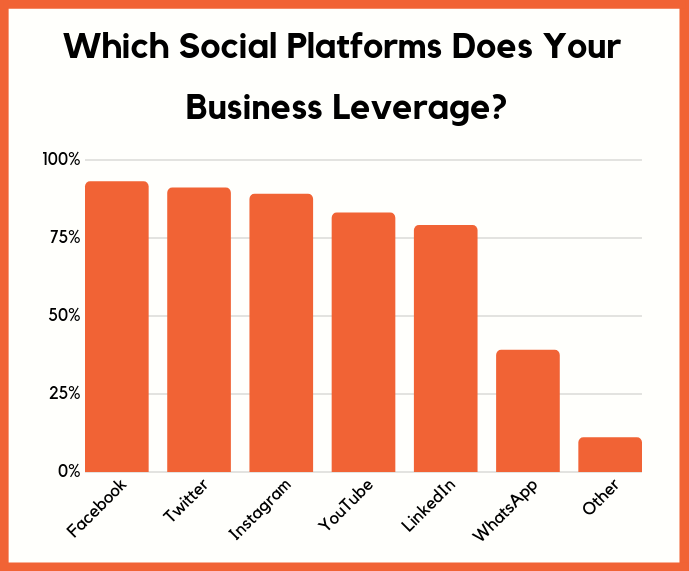 Over the upcoming years, you can assume social algorithms are going to get tougher from both an organic and paid perspective.

But that doesn’t mean you can ignore the social web or stop using it. It’s not dying and it is here to stay. 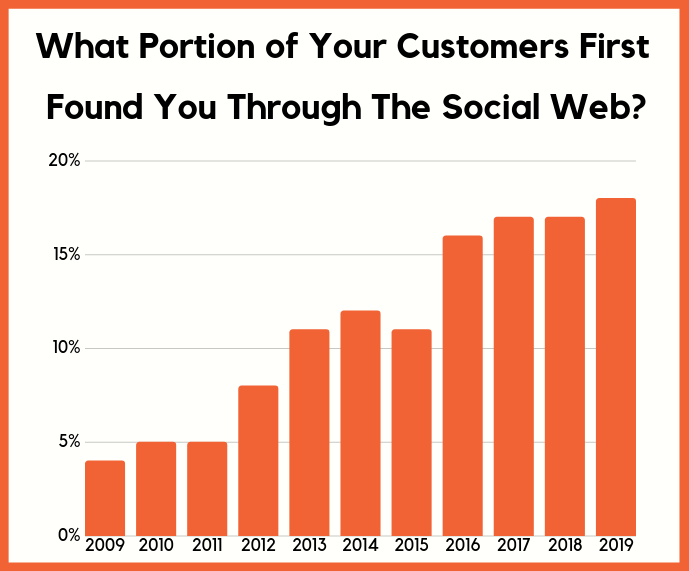 The data shows social media is on the rise. Sure, these sites aren’t growing at a rapid pace anymore but that’s due to the majority of the world already being on one of these platforms if not a few of them.

They are effective because people trust what they see on these sites and that should continually increase as they fix issues like fake news.

As long as you follow the tips above, you’ll be able to maximize your social media traffic and revenue even when the algorithms change in ways that don’t favor you.

So how are you maximizing your social media traffic?

PS: If you want to know where content marketing is heading, check this out.