There are a billion emails sent every day by MailChimp alone.

There are over two million blog posts published each day.

Average page length has become a staggering ~2000 words, which based on average writing times, can easily take up to four hours (or half a workday) for a single post.

The sheer volume of marketing activities is rising to a nearly unsustainable point.

Not to mention, your calendar’s already full. Strapped and spread thin.

But being better is.

Here’s how a seemingly lazy approach to the demands of marketers everywhere can help you double down on quality to excel.

Start by Doing the Right Things, Not Doing Things Right

A few years ago, digital agency Seer put together an excellent research Guide to Pinterest.

Towards the bottom, after all the fun tips, tactics and hacks for marketers to use, comes the analytics section.

One of the striking things you’ll see when staring at their work long enough (beyond those impossible-to-see images where you have to cross your eyes to make the foreground picture separate from the background) is a symbiotic relationship.

The more engagement (as in repins, clicks and likes) something gets, the more impressions (reach) it gets too.

This finding, while seemingly basic and obvious at first, appears on other social platforms as well.

Analyzing your top performing content updates on Facebook for example will show the same correlation between the posts with highest Engagement, also have the highest Reach. 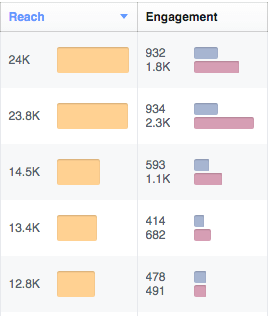 When you look at how these individual posts stack up over time, you’ll again see that when Engagement (measured by Reactions, Comments and Shares) spikes, so does Reach. This is no accident of course. Social algorithms are specifically designed to reward engagement as a quality signal. More ‘Likes’ on your funny cat meme tells EdgeRank that other people are enjoying what you’re doing, and more should be able to view it too.

Those individual interactions act similar to how quality backlinks act as votes for pages to rank higher in search engines too.

A literal Quality Score used in AdWords dictates what you effectively pay. Which means a higher Quality Score, enables lower CPCs. Which in turn should lower your Cost per Conversion. And raise your ROI.

The principle of leverage is clearly seen in this example, where you can quickly (like in a few days) take popular keyphrases from one Ad Group with notoriously low quality scores… … spin them off into their own dedicated Ad Groups with brand spanking new ads and landing pages to match, and watch how the new results eclipse the previous ones.

This AdWords example (like the social ones before it) are similar because they all share something in common.

Specifically, an economic principle founded over a century ago.

In the late 1800s, an Italian economist was tending garden when a sudden realization occurred to him.

The yield from his peapods resembled other distribution ratios he was recently studying, including distribution of income and land in his home of Italy.

His Cours d’économie politique paper was published at the University of Lausanne in 1896, going on to inspire what would become known as the Pareto Principle.

The infamous 80/20 principle may have become skewed in recent years (to more like 99/1% in some cases), but the basic theory still holds.

And when applied to digital marketing, it’s clear that certain activities can give you outsized returns.

That means prior to focusing on ways to improve efficiency and scale, start with making sure you’re doing the activities (whether we’re talking the type of social posts, quality backlinks, or AdWords fundamentals) that will provide leverage; generating the most significant returns with the least amount of effort.

86% of people flat out ignore banner ads on most websites.

While the number of people using ad blockers (which eliminates all browser ads altogether) has skyrocketed in the last few years, shooting up to almost 200 million in the last year.

Some companies, like Apple, are trying to bake ad-blocking features into their software from the get-go to help consumers deal with the onslaught of clutter.

Why are so many intent on not just turning a blind eye, but going out of their way to make sure they never see another ad?

We could sit here and throw around some statistics about how consumers have never seen more ads in their lifetime than today. And they’d all be true.

But here’s the other reason.

It’s because these ads suck.

Not technically. The creative might be great. They ticked all the boxes. They’re hitting all the popular ad networks. They’re following the checklist of good ad campaigns over the last few years (or longer).

The problem is that in many cases, these ads are completely irrelevant to the people seeing them.

In other words, they’re being efficient but not effective. And unsurprisingly, these ads inevitably fall on deaf ears.

Again, the solution isn’t more ads, but better ones. Through personalization and automation.

Using automated ad platforms that personalize each message not only shaves off some time typically required for creating so many different creative campaigns, but also boost results over the standard junk people are clamoring to avoid.

A perfect, simple example includes Facebook Dynamic Product ads, which works similarly to other popular retargeting or remarketing methods. They target people on their network who recently viewed individual products on your site, with well-timed ads being pulled from a database or product catalog. It’s seamless, targeted, and timed to perfection. And the results speak for themselves.

The party line straight from Facebook boasts that The Honest Company saw a “34% increase in click through rates and a 38% reduction in cost per purchase” from these ads. Beyond ads, email is another popular channel whose performance continues to decline.

The reason should be obvious now. Too. Many. Damn. Emails.

MailChimp by themselves sends a billion every single day. Which isn’t necessarily the hard part according to an excellent Wired piece. The hard part is making sure those emails get delivered successfully.

Email service providers like Gmail have begun using sophisticated methods such as machine learning to either redirect your basic email blasts to a separate Promotions inbox (where they go to die a lonely unread death), or quickly flag them as spam (and again, don’t allow them to get through to the people you’ve intended to receive them).

More emails only compounds this problem. Again you need better ones. Specifically the kind only available through automation.

These, it seems, are good stats. By fairly reputable sources evidently.

Automating key events, whether that’s customer onboarding or client follow up or checkout cart abandonment, is a simple way to get more done with less.

The automated relevancy and timing increases results. While the use of automation helps cut down on required staff or complicated manual methods that barely scratch the surface of potential tools like HubSpot might deliver. There’s a lot of debate around the performance yield of A players vs. B players.

The exact definitions are muddied but the picture is clear: most organizations can’t carry deadweight (no matter which letter grade we’re talking).

Good people, while absolutely necessary and critical to the success of any organization, are (a) hard to come by and (b) expensive.

Beyond the difficulties in hiring them, their compensation (deservedly so) typically follows that same 80/20 (or 99/1) relationship examined earlier.

What exactly makes A players, A players, is tough to define. But they’re essentially alchemists; possessing this rare combination of incredible vision, creative ingenuity and the raw intensity to get a lot of valuable shit done when there’s no map or rulebook to follow.

They blaze their own trail and figure things out on the fly that usually turn out correct.

The ambition is to have a team full of these A players. The reality is that yours probably won’t.

The key is to find people who can potentially become A players one day, and help them get there by giving them a clear process to follow.

Franchising sounds like entrepreneurial purgatory for most. However formal processes result in more revenue and innovative companies are still systematic.

So after toiling away for long enough, E-mything your business to work the system is the best approach to create a business built to sell.

Because typically hiring young, relatively inexperienced, or overseas people is the antithesis of quality. The reason this approach typically fails is because they’re thrown in the deep end, expected to figure things out when they lack the context of experience.

For example, many companies hire external writers to help share the workload. But problems quickly happen when you expect them to immediately understand your style, tone, and subject matter. Even a simple outline of the categories, messaging examples and specific personas each should target is a huge head start over what most people have.

The great news is that you don’t have to reinvent the wheel either. You just need to cobble together and amplify based on your preferences.

Download Headline Hacks and use their ready-made headline templates to create a spreadsheet for writers so they don’t have to reinvent the wheel each time.

‘Franchising’ as E-Myth refers to it allows you to document how you want things to look, and employ more, (relatively) inexpensive labor to scale your productivity and results. When done correctly, you can even have people tackle technical subjects even with a complete lack of experience.

Canonicalization typically refers to duplicate content issues, which can impact SEO by splitting authority across several different domains (instead of consolidating it into a single URL to maximize that page’s potential value).

Simply reading that last sentence probably made your brain hurt. Besides being a mind-numbingly boring topic, fixing canonicalization errors can get slightly technical if you have to edit HTML directly. Processing these potential scenarios gives ambitious, diligent people – despite a lack of skill or experience – the ability to help ‘punch above their weight class’. Mindfully adding these people can help you scale results significantly faster.

Marketing output has never been higher.

It’s evolving at a breakneck pace; one that’s becoming increasingly unsustainable for most who’re already overwhelmed and stretched thin.

One counter intuitive solution to do less, but do it better.

Start by focusing on making sure that you’re doing the right things, and not just ticking boxes off your to-do list.

Once you’re going down the right path, use automation to help increase the yield or results you’ll see from your efforts.

And when ready, then (and only then) add additional labor on top of an already defined process to scale productivity.