How Groupon Hacked Social Media With the Banana Bunker

Blog / How Groupon Hacked Social Media With the Banana Bunker

Every now and then, there’s an explosion in the social media universe. Something hits viral status or breaks the Internet, and everyone is talking about the same thing.

Most of the time, such viral phenomena are not deliberately engineered to go viral.

Someone is curious about a dress color, has a routine celebrity photoshoot, or just wants to make a bowl of potato salad, right?

Groupon pulled off a spectacular viral campaign to promote a product known as the Banana Bunker, sold by Cultured Containers. 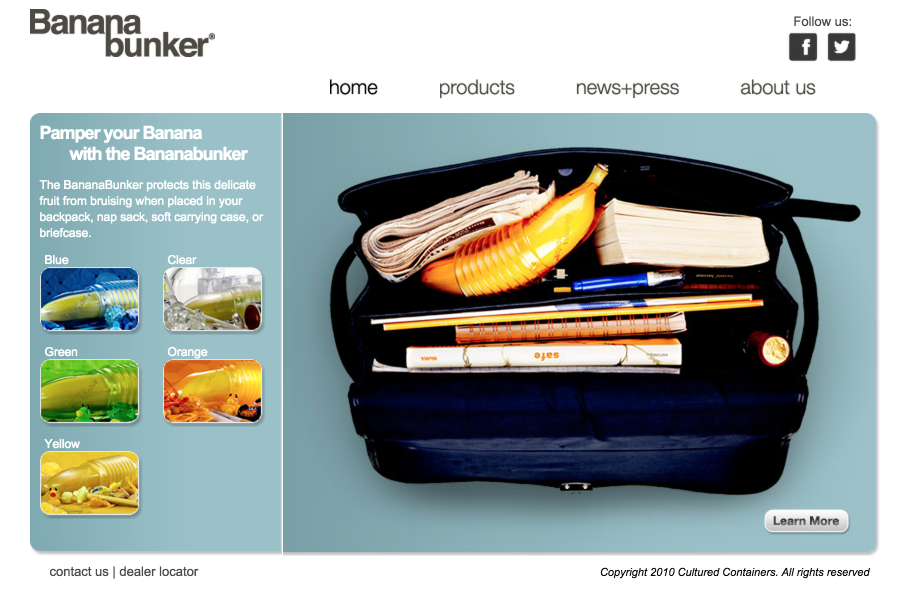 Groupon provided the plastic banana carrier as a 3-pack deal. And then, it happened.

Whether curious, cute or downright crude, people started a conversation about the banana bunker. Groupon skillfully steered the conversation inappropriate ways and managed to somehow keep up with the flood of curiosity.

It wasn’t just the Banana Bunker that reached viral status. It was Groupon’s handling of it.

Sure enough, it broke the Internet.

But take a look at what is actually going on in this viral social media phenomenon. Groupon successfully pulled off a social media hack.

The Facts of the Hack

First, let’s find out exactly what happened during the Banana Bunker event.

First, Groupon posted a photo to their Facebook timeline that notified people of the banana bunker. No big deal. It was fairly innocuous, rather tame, and not quite as revealing as a celebrity’s body, nor as entertaining as animated characters singing a song about letting it go. 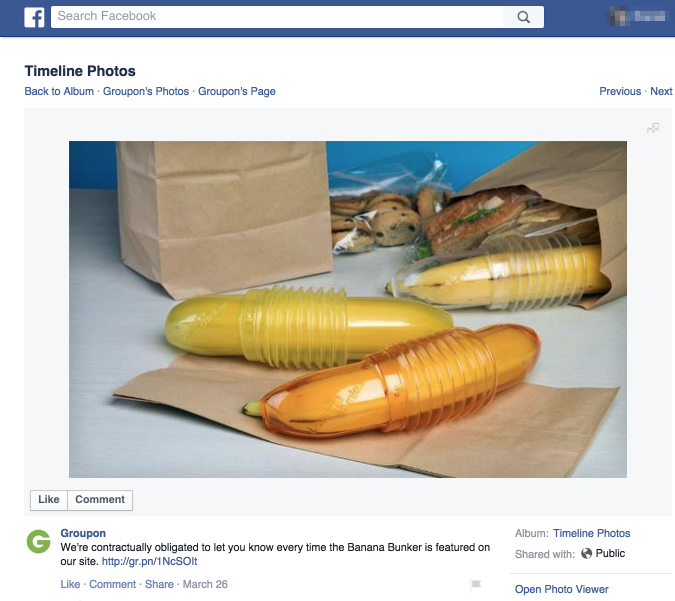 Once the picture was on Facebook, it started to gather momentum.

Groupon doesn’t usually get that level of shareability. Of course, Groupon is familiar with advertising selling bizarre products that people don’t actually need. 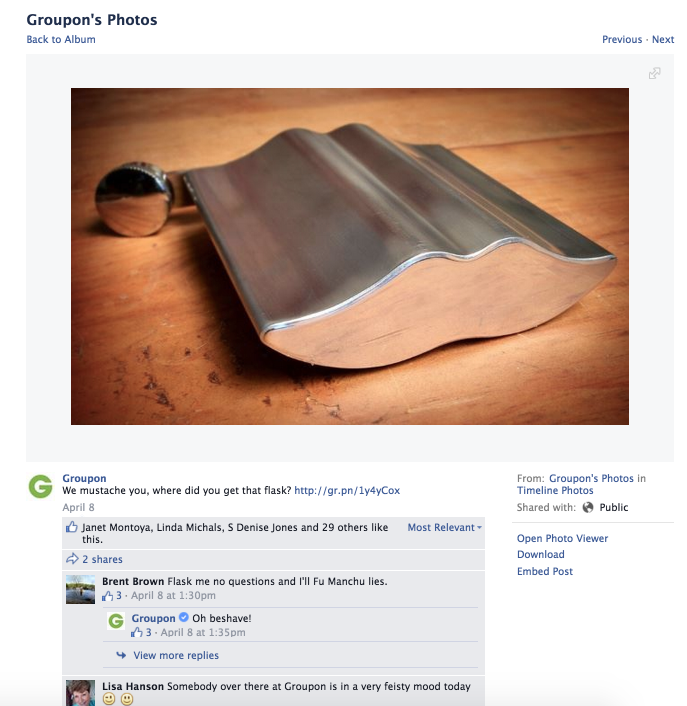 But the banana bunker was different, in part, because it was, well, prone to innuendo.

And that’s what precisely where the comments went.

“What if my girlfriend doesn’t like the banana bunker? What should I do?”
Groupon: “Two words: new girlfriend.”

“Is it okay to caress my banana bunker?”
Groupon: “Human contact is always a great way to show someone or something how much you care! hold it dear, and let it know that you’re proud of its snack fruit protection.”

“What if my banana is too big?”
Groupon: “Let’s not exaggerate, Holly.”

And on it went.

What Groupon Did Right

What was it that made Groupon popular, appealing, and viral? What did Groupon do right?

By learning a few of the smart moves behind the Banana Bunker hack, we can probably figure out a thing or two that makes social media effective and share-prone. You probably don’t sell banana bunkers, but you do business on social media, right?

Here are some crucial features about the Banana Bunker hack.

Facebook is notorious for its persistent punishing of brands’ organic reach. Forrester’s Nate Elliot complained that “Facebook has finally killed organic reach,” and advised marketers not to rely on Facebook for marketing.

In spite of the complaints, Facebook is still hot.

Despite the naysayers, Facebook is still a place where things happen. Since most Groupon users are on Facebook anyway, it’s the perfect place to host a free-for-all conversation about the Banana Bunker.

If you’re like most online businesses, most of your customers are on Facebook. Meet them on their turf. Have a conversation in a format they’re familiar with. Utilize Facebook’s built-in notification system. Promote interactivity. Spark discussion. Enjoy the mobile-friendly platform. Go ahead and use it.

When in Doubt, Be Funny

Groupon’s greatest maneuver was their use of humor.

And that’s exactly why people kept coming back. This was one hilarious thread to be on and to participate in. Whoever was on Groupon Facebook duty that day was on a roll.

Was the whole banana bunker thing an accident? Not really. Nor was Groupon’s valiant effort to keep the humor level high.

Bill Roberts, head of Groupon’s global communication, was straightforward about their intentions:

“Overall, we’re usually replying to people with this type of humor on most posts. It’s a big part of our social engagement strategy.”

Funny sells. Why? Because it makes people feel good. We all enjoy the sensation of being humored, of laughing at a joke, and of being entertained.

Plus, when we’re humored, we’re also more receptive to the proposition of buying what’s being offered.

Yes, there were plenty of efforts to distract Groupon from their goal, but Groupon could not be dissuaded. In spite of the many attempts to get Groupon to change the subject, Groupon stayed on topic.

That’s also what made it so funny.

Groupon chose a straight-faced and let’s-be-serious approach, which was hilarious.

The event didn’t start with a joke. It started with a droll, “we’re doing it because we have to” flavor.

Groupon probably knew that banana-anything was going to get some salacious comments. And they were ready. After all, they’ve sold these things before.

However, with the runaway success of this spring’s sale, they had to improvise in order to keep up with the commenting velocity.

When interviewed by AdWeek, Bill Roberts explained, “We had a little extra time, and thought it would be funny to play along with people’s trolling comments. Then the momentum kept building, and we kept replying.”

Will Burns, in his Forbes opinion piece on the topic, turned the whole event into a discussion of “brand improv”.

Brand improv, Burns explains, happens in “those rare moments when a brand is visibly thinking on its feet, much like an improv comedian.” It happens when a brand dispenses with the approval committee and the law department, and just wings it.

And it can be a beautiful thing.

And just maybe that’s the way social media was meant to be handled.

Remember, this is Facebook. That means Groupon knows your name. They replied to commenters by using their name.

In many of their responses, Groupon used casual language and personal references.

Compare that with the bot-driven and absolutely infuriating autoresponders of not-so-personal companies. 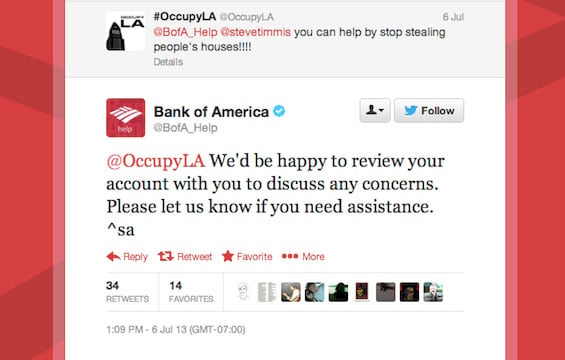 Groupon didn’t let the conversation fly off the rails into the weeds of NSFW. Instead, they kept things focused on the banana bunker — admitting, of course, the wisecracking humor behind each innuendo-laden comment.

Conclusion: Do It Again

If you pull off a great marketing stunt like this, what should you do?

Mere weeks after their break-the-internet social media explosion, Groupon was at it again.

This time, they have a video to introduce the bunker on Facebook. The video is so Groupon with its humor style, with its humble self-reference, and a shoutout to some of their favorite Facebook commenters. The comments are already rolling in, so we’ll see how this conversation turns out.

What aspects of Groupon’s social media hack do you think are worth trying with your own brand?