How to Use Gamification for Better Business Results

Blog / How to Use Gamification for Better Business Results

Have you ever collected frequent flyer miles, taken pictures of your record MPG in your Toyota Prius, or filled out a complete profile on LinkedIn (because you wanted to reach that 100% on the profile completeness)? If so, you’ve been gamified.

Gamification is the concept of using game design elements in non-game applications to make them more fun and engaging. And it’s growing – M2 research predicts that the gamification market will reach 2.8 billion in direct spending by 2016.

And look at the Google Trends graph: 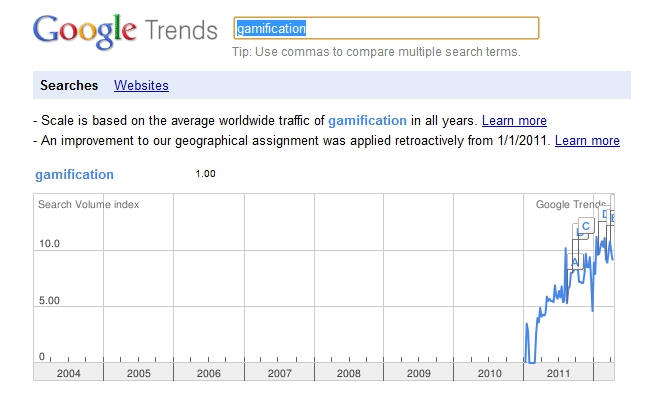 This thing is hot.

Why? Well, people like games. As much as 80% of U.S. households own a gaming device, with the average age of gamers at 37.

If you take what people love about games and apply it to other things, they become more enjoyable and fun.

Gamification works by encouraging users to engage in desired behaviors, by showing a path to mastery, and by taking advantage of our human psychological predisposition to engage in gaming.

Smart marketers use it to increase consumer engagement and influence consumer behavior. In order to achieve this, consumers should be rewarded with virtual items (like points) for specific behavior (e.g. buying something, signing up, using the product, filling out their profile), and those virtual items should offer access to exclusive privileges and rewards, such as levels or prizes.

Game mechanics are constructs of rules intended to produce an enjoyable gameplay. Think of it as basic building blocks that can be combined in interesting ways to drive a (often complex) sequence of actions in order to achieve desired results.

These typically include items such as points, badges, levels, challenges, leaderboards and the possibility to level up. These come from game-like dynamics such as rewards, urgency, pride, competition, and status-building.

I’d like to point out that gamification is not games. Games are often much more complex than the simplifications that are abound. Critics make a point that games ≠ points and what is often called gamification should be called pointsification instead.

If fun were about just “rewards”, this would be the best game ever: Gamification is also not about game-like wording. It’s not enough to call filling your email newsletter subscription form an “unlocking the treasure” and following you in Twitter “a challenge”. For something to be a fun, interesting challenge, it has to be, you know, interesting, fun and a challenge.

While gamification in marketing has become a popular buzzword in the last two years, the practice of using game-like mechanics in marketing programs has been around for a long time. An airline loyalty program or a happy hour in your local bar are just some of the examples.

Before you can start thinking about using gamification to grow your business, you need to understand its principles.

At SCVNGR we like to joke that with seven game dynamics you can pretty much get anyone to do anything.

The goal of game dynamics is to drive a user-desired behavior predictably. In order to do so we have to understand how humans behave. After all, as per “Gamification by Design” co-author Gabe Zichermann states: “Gamification is 75% Psychology and 25% Technology.”

The technology part keeps getting easier. Application designers can build on gamification platforms from startups like Badgeville, without hardcore backend coding.

So in a nutshell gamified systems must:

The structure is all about timing – if all components don’t fire simultaneously then the player will lose interest or become frustrated. Here are some gamification principles you can build into your website and apps.

You can see a list of 47 game mechanics used by SCVNGR here.

So How Does Gamification Increase Engagement?

To sum up the psychology behind it, game dynamics use positive feedbacks (points, badges, status, progression, etc.) to build up the users’ motivation.

Next, they increase the perceived ability of users by making difficult tasks / challenges simpler either through practice or by lowering the activation threshold of the target behavior.

Game dynamics place triggers in the path of motivated users when they feel the greatest excess in their ability. That is, triggers that prompt the user for action are designed to bring about the convergence of motivation, ability, and trigger all at the same moment.

All of this together forms an effective driver of user behavior.

Gamification Can Boost Conversions Up To 7x

Extraco Bank in Texas was able to use gamification to teach their customers about certain benefits the bank has to offer. Ironically, they employed their gamification technique to help ease the pain of the news that free checking was going to go away for certain customers.

Their game had around 4,250 visitors and was able to convert 14% of visitors into a bonus banking account from their free checking account. The usual rate of conversion is less than 2%.

Increase Work Speed And Results By Making Work A Game

55% of Americans said they were interested in working for a company that uses gamification to increase productivity. Here are a few examples of gamification improving the workplace:

OpenText made it possible to earn points and badges by sharing information, contributing to discussions, completing assignments, passing tests, or closing deals for their OpenText Pulse product. The results were more than promising: “the IT level of active participation was well above 60% which is significantly higher than the current average in the rest of the company.”

Stewart Agency wanted to get sales people to collect email addresses when talking to leads. They incentivized this with a competition. They launched contest which awarded salespeople based on how many emails they could collect over the course of a couple months. In less than 2 months they almost doubled the number of emails they had collected over 3 years.

Target launched an initiative to gamify the checkout process in their retail stores. They started to use a gamified system at checkout stations – scoring the transaction’s speed and accuracy of customer checkouts. The system calculates the cashier’s success rate over multiple transactions. A system of beeps and green lights were built into this system as a way to create positive reinforcement, a similar feeling to that of beating a level or achieving a high score in a game.

Codacademy doesn’t let people to sign-up for their service, but instead invites them to participate right away. As you complete little assignments, you earn badges, get a pat on your back and enjoy making progress. Users are only later asked to create an account, if they want to save their progress and not lose the work they’ve done so far (using loss aversion).

Get Employees To Exercise

Gamification is about behavior change. NextJump wanted their employees to work out more, and thus be healthier and save company money.

They installed gyms in its offices, and offered to reward to performers with a cash prize. Still, only 12% of the company’s staff started to workout. Then they retooled the fitness “game” to become a team sport. Leveraging the game themes of tribalism and competition had an astonishing effect on behavior. Today, 70% of NextJump employees exercise regularly.

Engage Research and GMI found that gamified surveys would produce both higher quantity and quality feedback.

They began by making questions more fun and game-like in nature. The results were instructive: 2-3x as much feedback to the more engaging questions and participants consistently took more time providing their answers.

We explored how rules that we all know from playing games could be adapted to turn questions into puzzles. A question such as “Describe yourself” yielded on average 2.4 descriptive words, with effectively 85% of respondents answering. When that question was changed to present the challenge “Describe yourself in exactly seven words” the descriptors increased to an average of 4.5 and the response rate rose to 98%.

They also included game mechanics like rewards and feedback. Their research showed that almost everyone will respond to game mechanics, and these game-inspired techniques really deliver.

TV show Psych launched an online platform Club Psych and implemented gamified incentives to raise page views by over 130% and return visits by 40%.

The resulting rise in engagement has generated substantial revenue for the company, bringing registered user counts from 400,000 to nearly 3 million since the launch of the gamified version.

Gamification is a powerful tool to boost your business results – either by incorporating it in your marketing and/or product, or by using it to motivate your staff. Quality of execution determines the success.

“Most attempts at gamification currently miss the mark, but successful and sustainable gamification can convert customers into fans, turn work into fun, or make learning a joy. The potential is enormous.”

A gamified application must offer a worthwhile experience; otherwise people are not going to use it. At the same time, its success has to be measured.

About the Author: Peep Laja runs a conversion marketing agency Markitekt. He shares conversion advice on his blog ConversionXL.