The 7 Growth Hacks That Led Groupon to a $12.7 Billion IPO

228% – that’s how much Groupon grew their revenue in one year. As one of the fastest growing companies around, Groupon employed many growth hacks that helped lead to massive growth. In this article we’ll examine some of them and how you can apply them to your own online business.

As you’ll see later in this post, Groupon is based of turning subscribers into marketers by giving them control to spread the Groupon product.

1. Sharing is in Groupon’s DNA

You just found a great deal on Groupon. It’s one that you can’t pass up. The only problem that jumps in your way is that not enough people have signed up for the deal – and the deal expires in 2 hours.

Your motive is to spread the word, not just about the deal, but also about Groupon. Telling your friends, family, followers and whoever else you can about the deal and encourage them to buy. Those uninitiated with Groupon will become introduced to it through the deal.

Have you built your own Groupon style promotion? If not, try running a sale on a certain item. Or try offering big discounts to your current customers only if they sign up X amount of people within Y amount of time.

2. Tell Your Friends After You Bought a Groupon

After the user makes a purchase for a Groupon, they can share it on social media. This spreads the offer and the Groupon product to their friends and/or followers.

The option to share a purchase on social media is nothing new, but it can be quite popular. Leave the option open for a customer to share their recent purchase with the people they know. Chances are if they see the Tweet or Like buttons there they will click it. They probably won’t think about going to Twitter or Facebook to post about their purchase if no buttons are there.

A movie ticket for one may be a nice deal, but what about for 2-3 people? These Groupon’s for multiple people help spread the advertising of Groupon.

Whatever your business does, it may be beneficial to add a package deal. If you run a SaaS company that sells project management software, you should try a ‘Buy one, get one for a friend deal’. Similar to referrals, this would have a customer buy your software, getting a discount for them, and then giving the software to another person who has never used your product before. The individual that got the referral then gets a month or two free trials. This spreads your product and increases your viral coefficient. 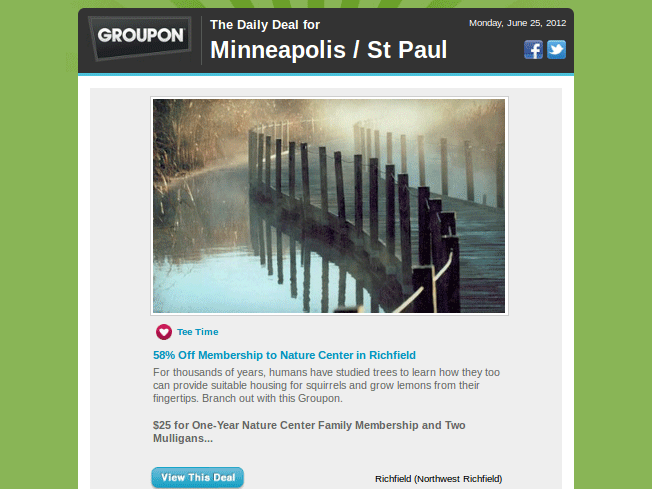 It may be overlooked, but the fact that Groupon sends daily emails can be attributed to their surge in growth. Less frequent, more frequent, or no emails at all (requiring users to go to the Groupon page themselves), would negatively impact their growth. Emailing too often will lead users to unsubscribe. These daily emails get subscribers to keep coming back to the Groupon product a few times a week if not every day.

Email is a great way to get users to keep coming back to your product. It can also be a great way to lose a customer. Value and respect the fact that someone gave you their email address. It may be best to tell them up front how often they can expect to receive mail from you.

So how do you know what frequency you should send email out to hit that optimal point of return? Answer: Test. Test your email campaign frequency and determine which rate works best for your business.

Groupon turns their customers into marketers by encouraging them to refer friends. Under the Featured Deal page, Groupon subscribers see this:

The person can only get the $10 when their friend buys a deal. They don’t get $10 just for signing up a person.

The cost for Groupon to run this is $10 per person. According to Quora, the lifetime value of a Groupon customer is around $25-$35. Groupon profit with this referral would be around $20.

Facebook is (as of January 2010) easily the biggest referrer for Groupon. This tells of the powerful synergy of combining referrals and social media.

What’s the lifetime value of one of your customers? Once you know it, try a referral system similar to Groupon’s. Don’t just have an option for emailing, make it possible for them to get referrals via social media.

Watch out for fraud, some customers may refer a friend, have the friend signup, and later the friend will cancel their account. Consider building a system that can reverse the transaction if fraudulent activities occur.

In yet another way Groupon turns customers into marketers, they allow subscribers to buy for a friend. If the friend is not a subscriber to Groupon, they get a nice introduction to it by receiving a free deal & see what process is like with Groupon. 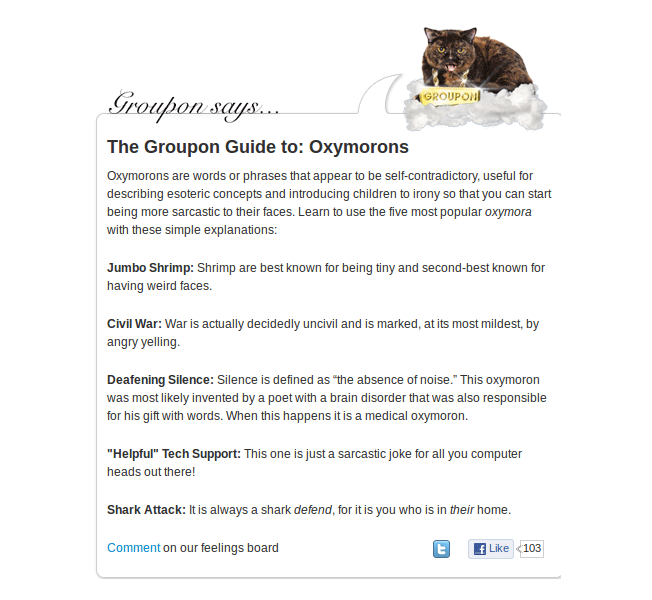 You’ve likely noticed that outside of the daily deals, Groupon posts a “Groupon Guide to [enter something weird here]” or something similar. These short, humorous “guides” are quite popular. Each one gets at least around 90-120 Likes, all of which drive traffic to the Groupon website and offer page.

It’s not about adding a bunch of different components to your website and attaching the Like and Tweet button to it. If you have something valuable that you think people will want to share, whether it’s a product page, funny video you made, or great copy.