Why Your Ads Should Look 100 Years Old

Blog / Why Your Ads Should Look 100 Years Old

Free opt-in ad campaigns like that have been around for almost a century.

Everyone’s looking for the hot new thing. A watch that counts your steps, takes notes, answers your calls, and oh yeah, also tells time. An iPhone that has a new update every time you turn it on. A car that is so smart it can drive itself.

But there’s something to be said for sticking with what works. If it ain’t broke, don’t fix it.

Even better, if it works well, no need to reinvent the wheel.

What the 1960’s Taught Motorola About Influencer Marketing

When it was time for Motorola to promote its new line of smartphones and features, it took its campaign to YouTube.

The phones were marketed for a younger audience, and with 54% of 18-34 years olds using YouTube at least once a day, Motorola knew it was the place to be.

They used 13 influencers to each create create “partnership announcements” and “hero” videos to show them using the new Moto Mods, that allowed users to customize their phones just the way they wanted. One user strapped the phone to a rocket and launched in 16,000 feet in the air.

This shouldn’t be surprising. Buyers are 92% more likely to trust the reviews and opinions of friends and peers over standard advertisements.

But as hip and cool and successful as this turned out to be for Motorola, it wasn’t a new idea.

In fact, it was decades — even hundreds — of years old.

Companies have been using celebrities, real users, and even beloved, made-up characters for years to sell their products.

Remember how much Santa loved Coca Cola? This one’s from ‘64: 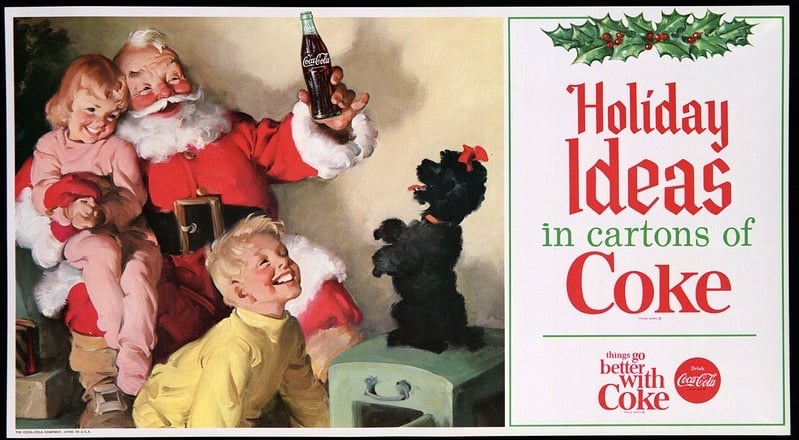 And what about Babe Ruth and his love for Pinch-Hit? Yes, that’s Babe Ruth as spokesperson for a tobacco company. The same Babe Ruth who later died of cancer at the age of 53. Next level brand partnership, right there.

You see, this stuff is nothing new. It’s not that new and fancy and innovative and cutting edge.

It’s the same old playbook, just dusted off and revised with a new edition. One that takes into account how our constantly evolving consumer preferences keep shifting.

Here’s a few more ideas for how tried but true methods are still relevant today.

Start by Grabbing Their Attention

As in, the only people who wore it were your grandparents?

That all changed a few years ago with a little sex appeal and humor:

Sales jumped 107% in just one month. Old Spice became the number one body wash and deodorant brand in both sales and volume.

And they reached new demographics of people (which is important when yours historically is about to drop dead).

But even that ad campaign, now nearly seven years old, is just a first-cousin of marketing techniques from long ago. 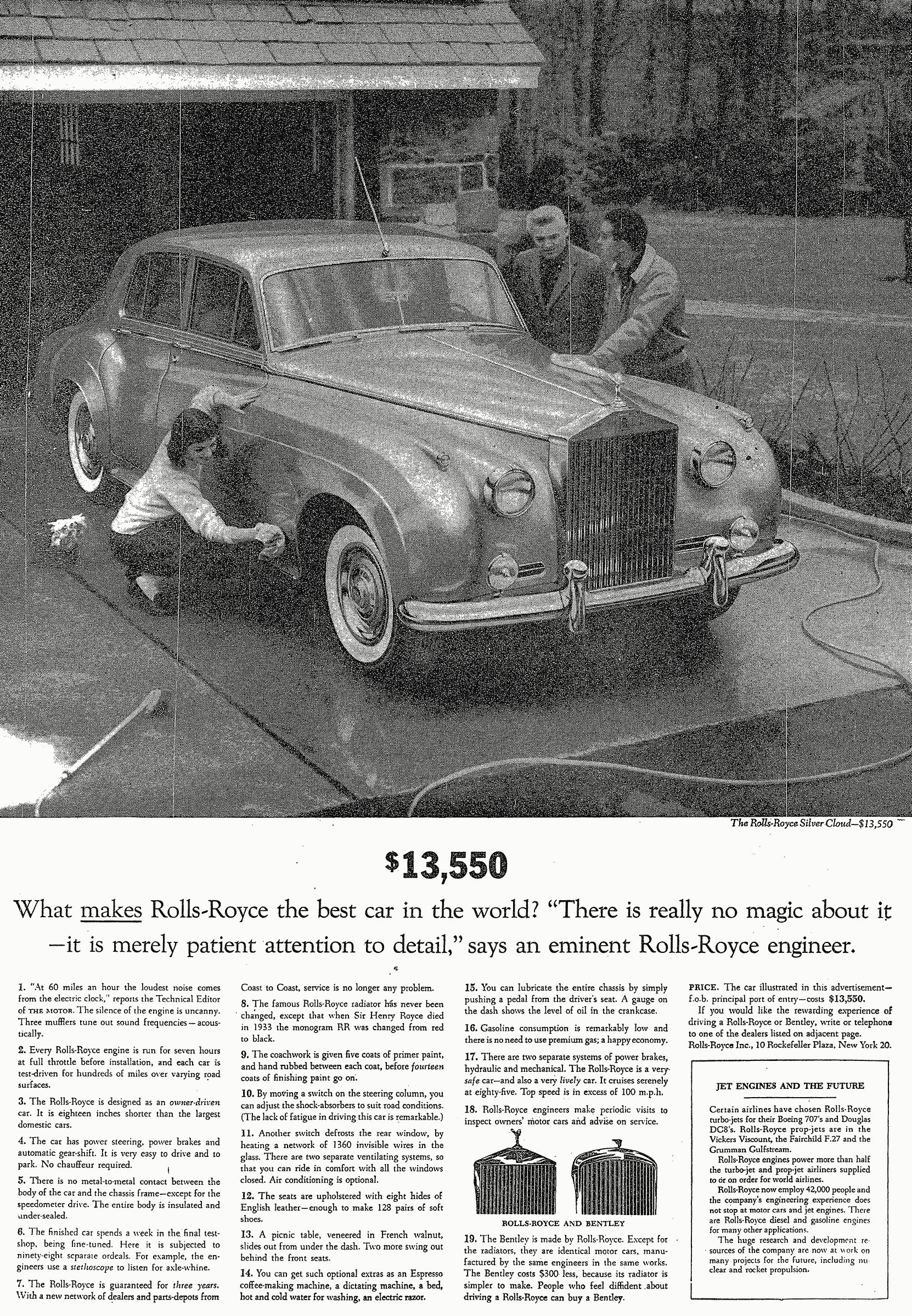 $13,550 for a car in 1958 was a lot of money, and Ogilvy was hoping to hook customers with mystery, intrigue, and a little high-end appeal.

He also updated their tag line a bit, which was a simple and direct, “The Best Car in the World,” that now reads, “What makes Rolls-Royce the best card in the world?”.

By turning that statement into a question, and then answering it, he was able to produce their highest-performing marketing campaign to date.

Unsurprisingly, there’s data from today that backs this up.

For example, MarketingExperiments.com ran two basic AdWords headlines against each other. The Control was a question, while the Treatment was simple and straightforward. Can you guess which one won?

You got it. The question-based headline. Even Ogilvy’s testing back in the ‘60s wasn’t a groundbreaking notion. Good ol Hopkins was doing that long before around 1900:

“Hopkins outlines an advertising approach based on testing and measuring. In this way losses from unsuccessful ads are kept to a safe level while gains from profitable ads are multiplied. Or, as Hopkins wrote, the advertiser is ‘playing on the safe side of a hundred to one shot’.”

Today we use content marketing to grab top of the funnel attention. Turns out that’s nothing new. Because storytelling is one of the best ways to develop the interest and intrigue required to keep people reading long enough to make a decision.

Storytelling Piques their Interest to Draw People Near

Today, marketers face unprecedented hurdles to get their name out there.

A New York Times article from a decade ago claimed the number of ads we saw each day was around 5,000. Keep in mind this was early for Facebook, YouTube, et. al. They hadn’t even hit critical mass yet.

Fast forward and nearly 200 million people worldwide are using ad-blocking software in order to take back control over their (albeit, limited) attention. A recent study found that only 14% of respondents could recall the banner ad on the page they just visited.

All of this spells disaster for marketers when our prospects lack the attention span of a goldfish.

That’s where storytelling comes in.

Nike has been leading the pack for years.

Back in 1999, they put together a one minute spot for the retirement of Michael Jordan. Clips and photos of his career, telling the story of his journey and successes. They didn’t even put up the Nike logo until the very end. For a good reason.

“It understood that what would really make a lasting impression, and what would help build the brand and allow the company to sell more products in the long-term, was an authentic story,” said Sujan Patel.

Ross Jeffries told a story, albeit a slightly more seedy version, in 1998.

“The Amazing Seduction Secrets of a Skinny, Ugly, 6 Foot Geek from Culver City California That Could Get You All the Girls You Want.”

Nerdy guy trying to get the girl is a tale as old as time. Now every non-skinny, ugly, 6 foot geek from Culver City California is gonna be hooked to read more of this.

Taking a familiar story or something that a consumer can relate to helps them understand just how perfect your product is for them. Why they need it. The emotional aspect that tugs at our heart strings or appeals to our vanity.

Ad copywriting formulas, like AIDA, help us touch on all of these critical pressure points. And once again, AIDA wasn’t just invented by some growth hacking millennial. It’s been around the block a few times since the nineteenth century.

Ad exec Joseph Addison Richards was talking about it way back in 1893:

“How to attract attention to what is said in your advertisement; how to hold it until the news is told; how to inspire confidence in the truth of what you are saying; how to whet the appetite for further information; how to make that information reinforce the first impression and lead to a purchase; how to do all these, – Ah, that’s telling, business news telling, and that’s my business.”

Now Get Them to Take the Next Step

Nobody knows why they need anything.

I didn’t even know I needed a special bag just for my french bread until you showed me how lacking my life was before I bought one.

But this information sharing takes a little time and finesse. You have to walk the customer through their journey. Too much, too soon, and it backfires.

That’s the chief difference between running PPC ads on Facebook vs. Google AdWords. (And why the former doesn’t work like the latter.)

There’s not much seduction required when people type something into Google. They’re already at the end of their journey. But successful advertising on basically any other medium requires you to lay the groundwork (that we’ve already discussed).

Once again, classic ad copywriting formulas help you better explain why people need what you’re selling when they don’t always yet realize they need it.

Even the U.S. Military has gotten in on the PAS (Problem, Agitate, Solution) game. Here’s an ad from 1967: 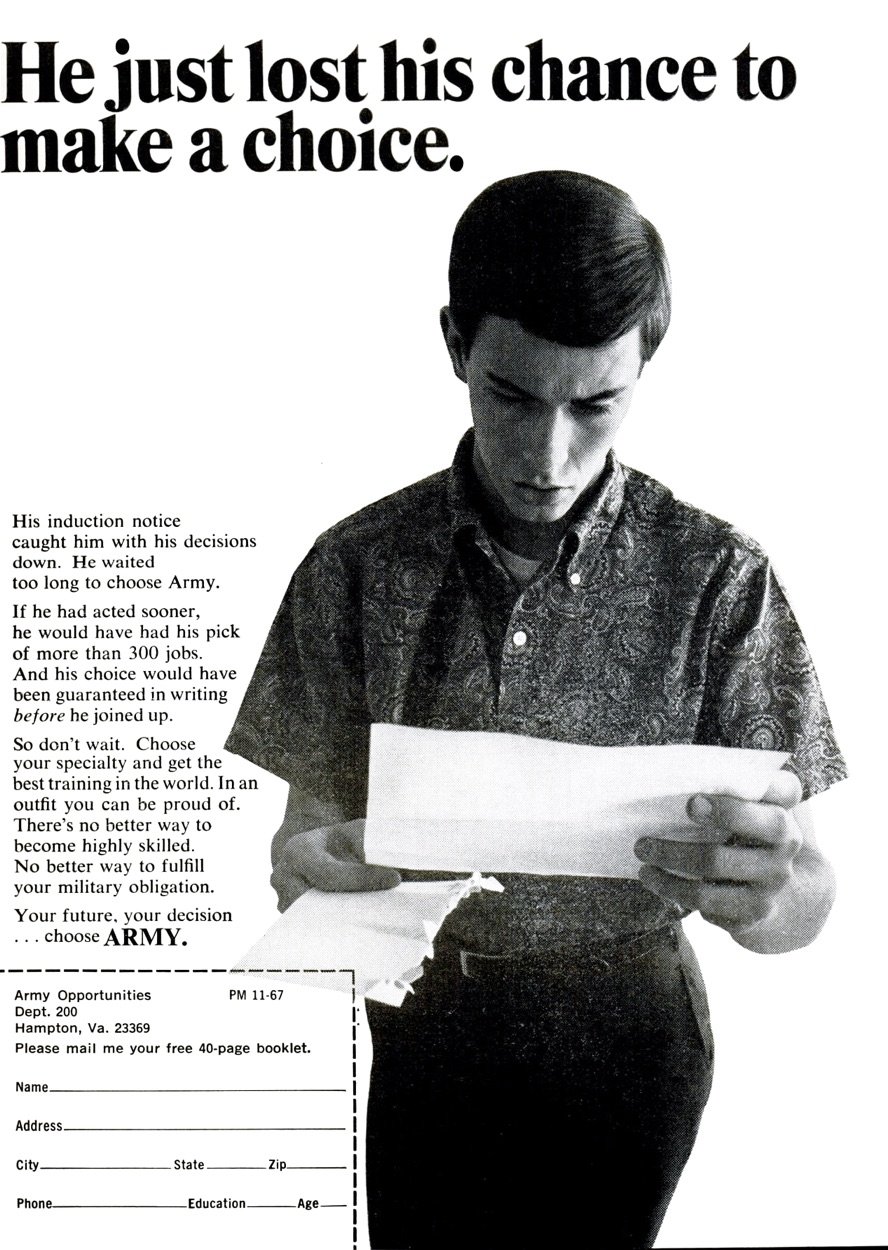 This guy waited too long to sign up (problem). Now he can’t pick which branch he wants. That could happen to you, too (agitate). Fill out this form and we’ll get you what you want before it’s too late (solution).

Or what about this example from 1990 for a book to help readers with their grammar? Look around and you’ll see PAS ev-ry-where. Here’s a slightly modified version from Dollar Shave Club Australia. No commitment? Everyone’s trying it? Only a couple of dollars? 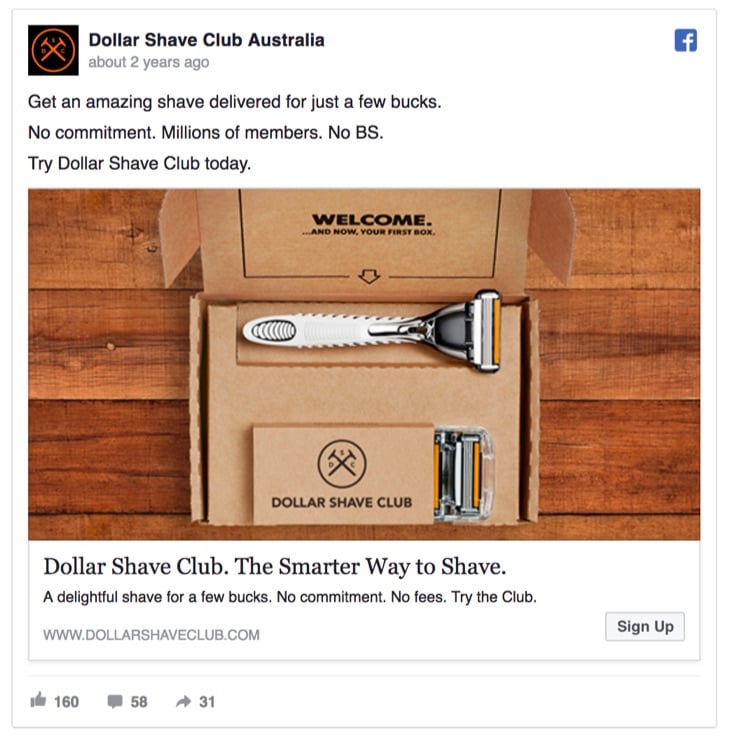 Long, long ago (like more than a century), advertising pro Claude Hopkins encouraged advertisers to create work that essentially sold itself.

According to the most factual source on the internet*, Wikipedia, Hopkins: “Insisted copywriters research their clients’ products and produce ‘reason-why’ copy. He believed that a good product and the atmosphere around it was often its own best salesperson.”

In other words? The purchase (or more accurately, decision to purchase) should be an absolute no-brainer. The value should far exceed the mental, emotional, or physical costs.

But that action-step that happens once the solution is presented often takes place with a simple click-through or from an online ad.

Here’s info-marketing guru Ryan Deiss with a too-good-too-be-true offer for his latest book: 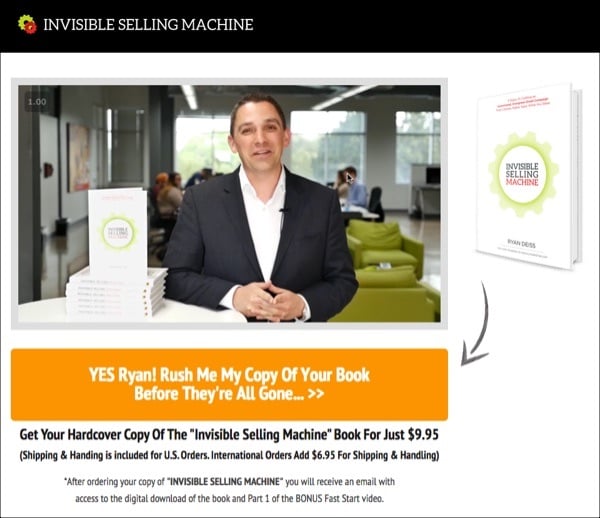 The offer here is low-friction. It doesn’t require a lot of steps or a big commitment, and the customer gets a good return on their time and money. And, you get to sift out the people who really have some interest from those who are just stopping by.

But, once again, not a new concept. Here’s one from over fifty years ago in 1965. 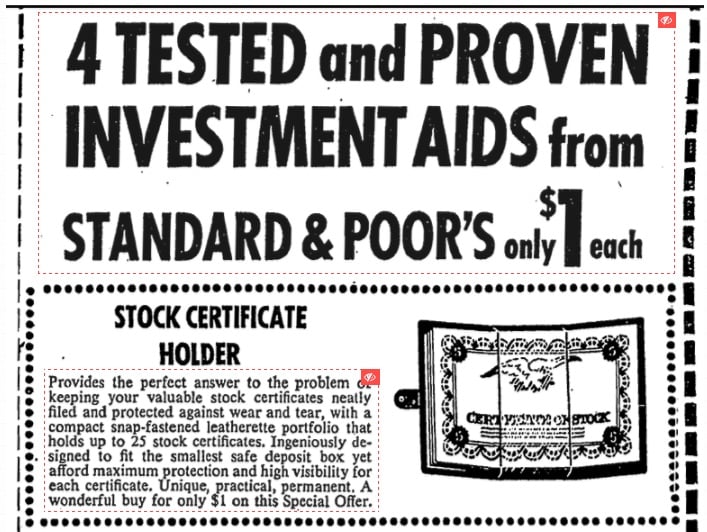 But sometimes even what seems fresh and new has been around the block a time or two. Decades old marketing tricks and tactics still work today.

And more importantly, can still produce more consistent results, too.

The next time you’re stuck on an ad campaign or looking for inspiration, don’t just look at what’s hitting the top of Growth Hackers.

Because history tends to repeat itself. And that’s a good thing for bottom lines.